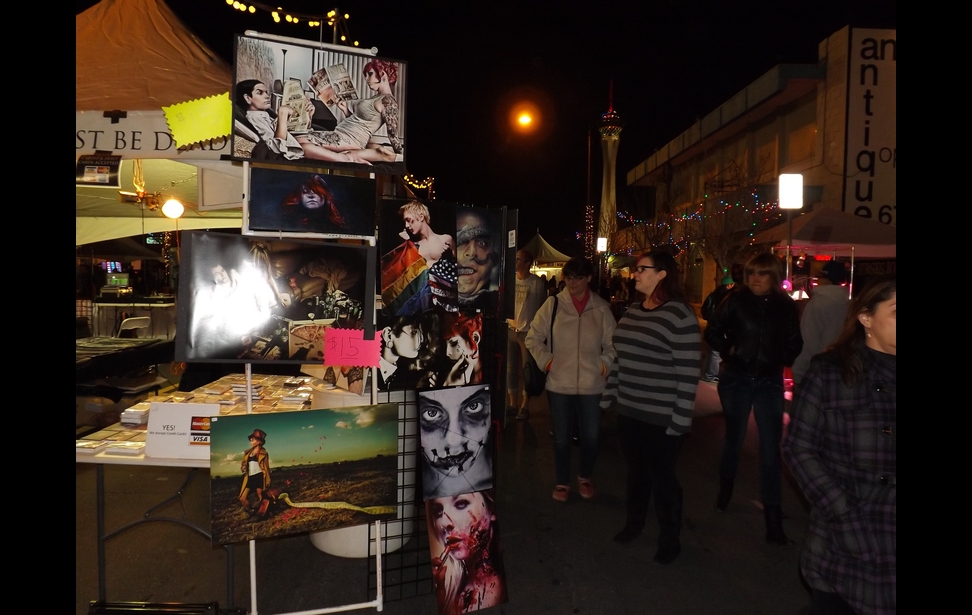 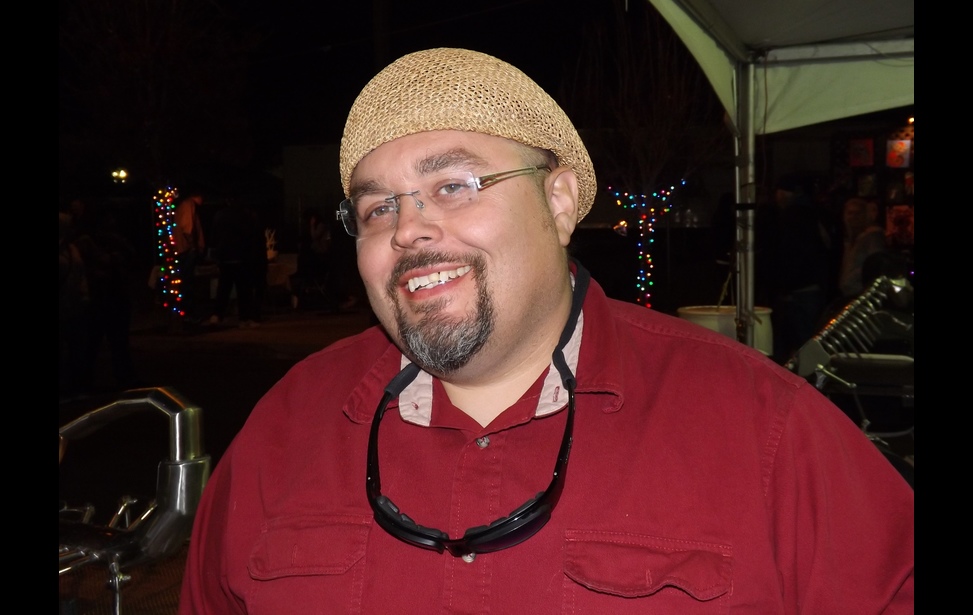 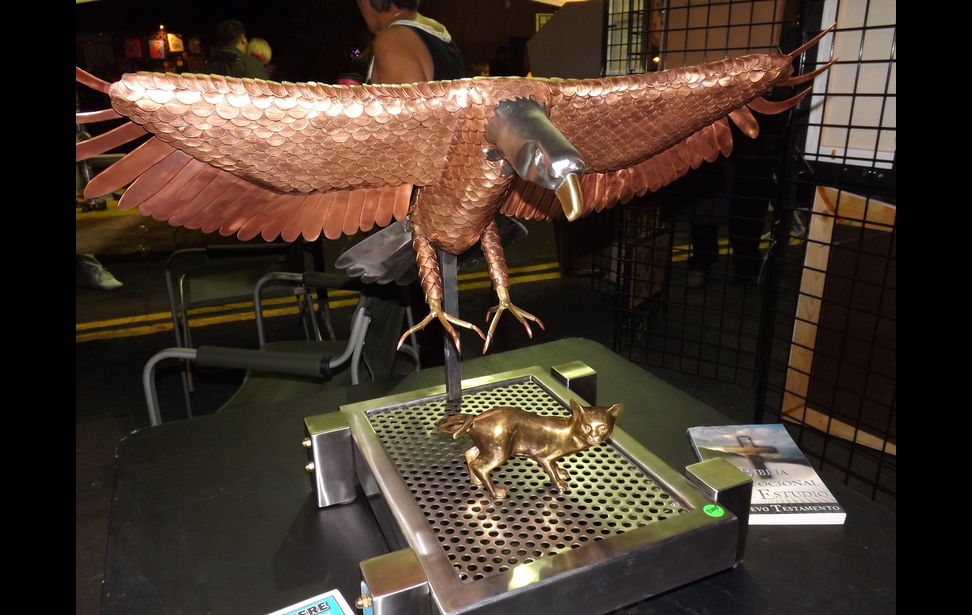 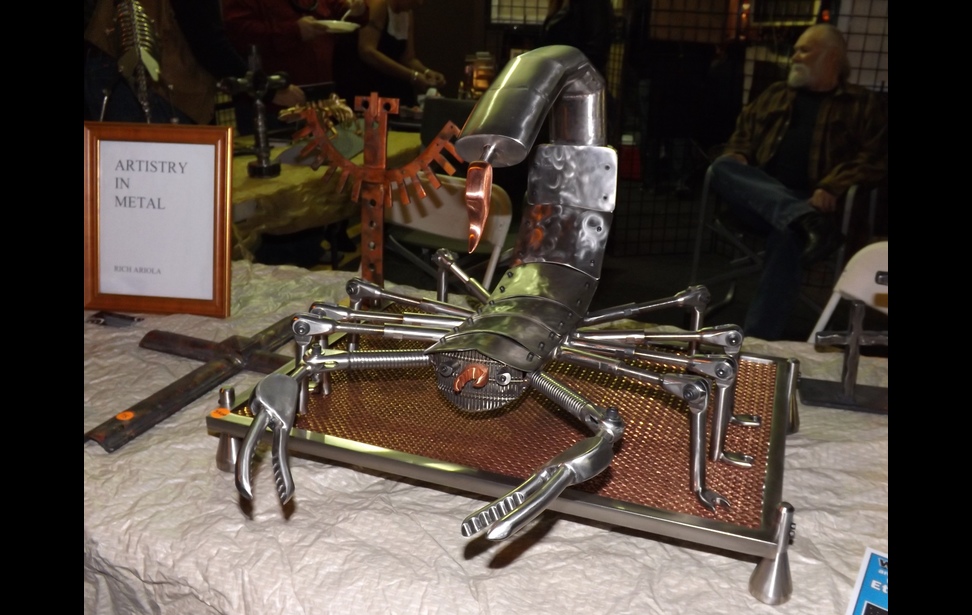 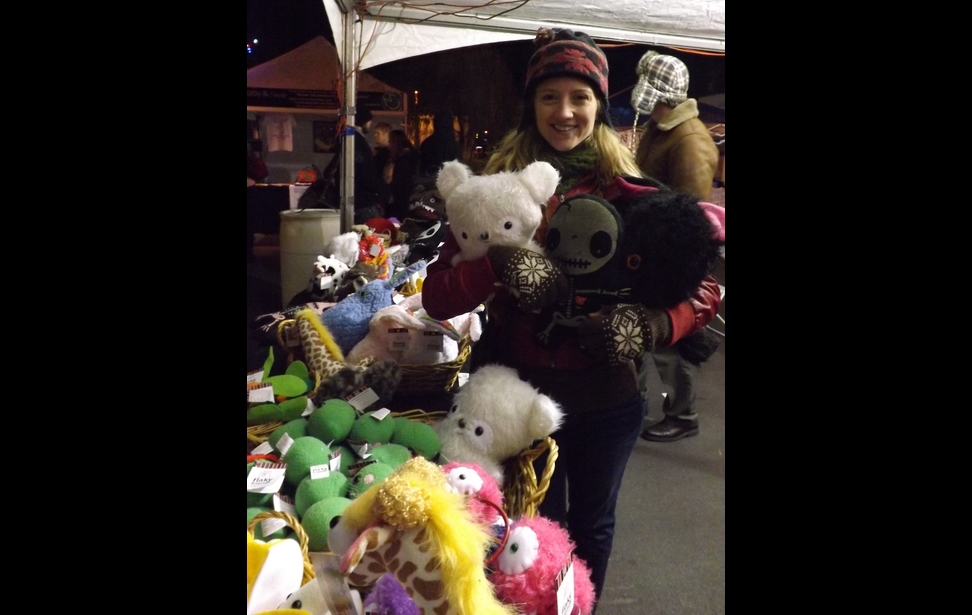 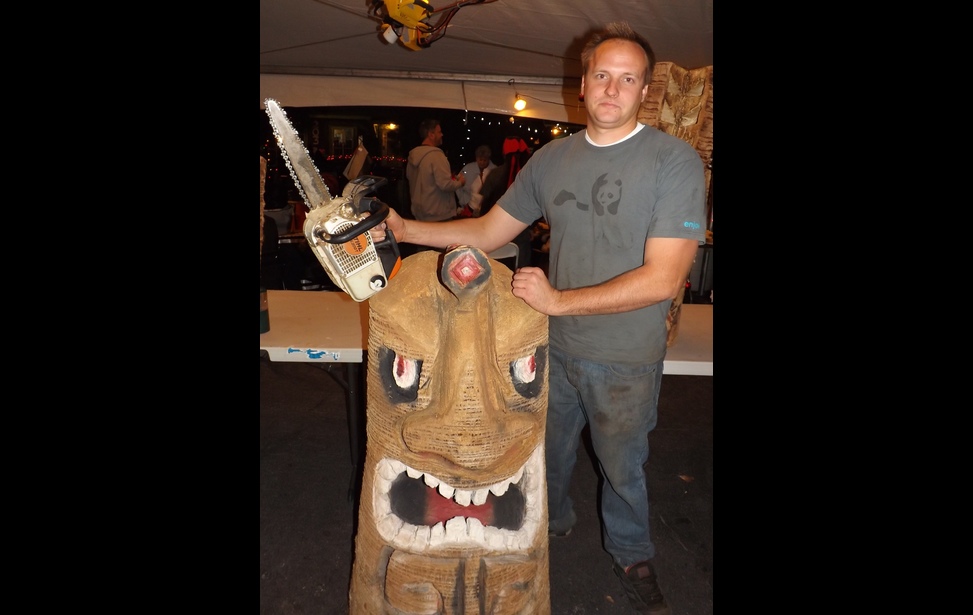 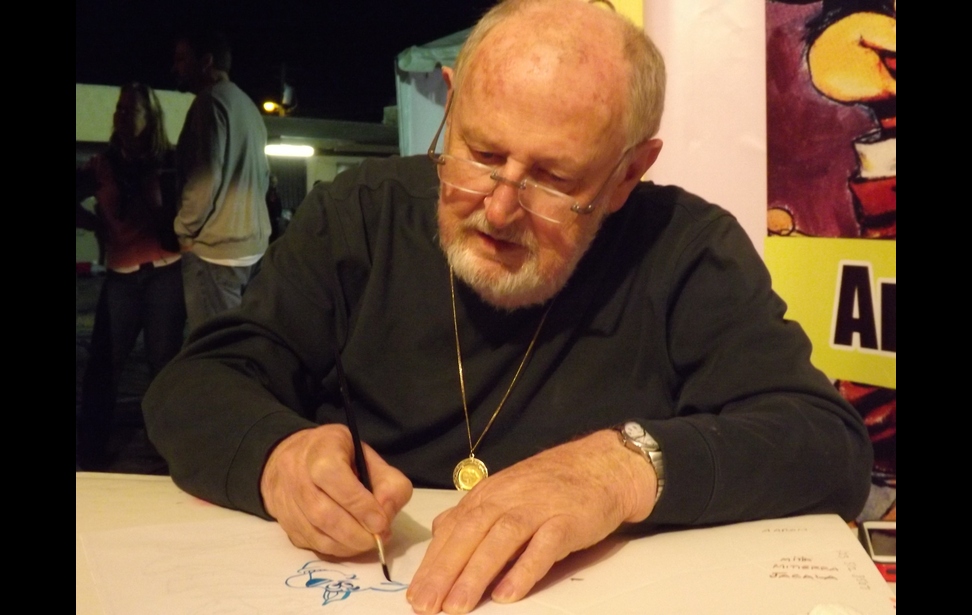 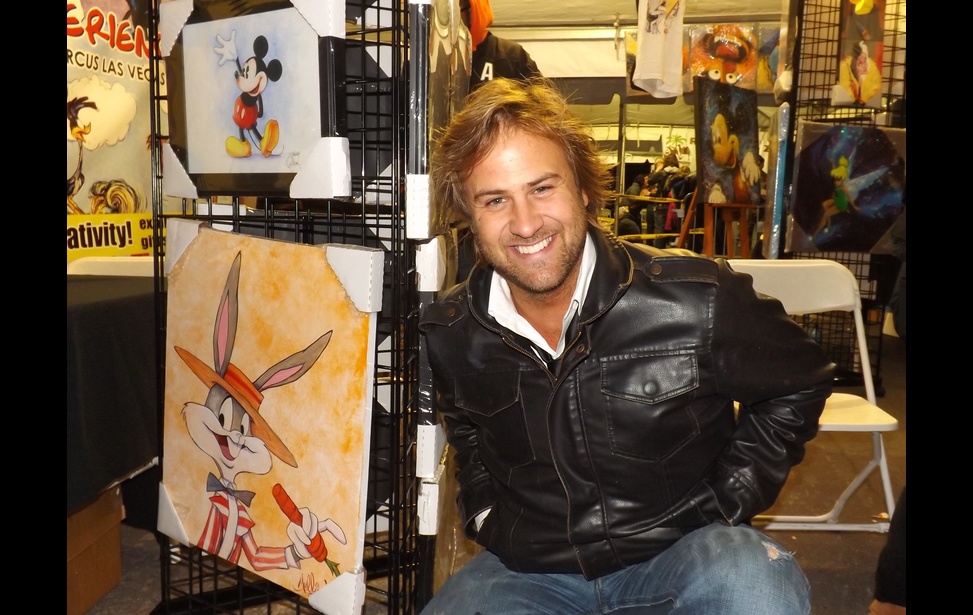 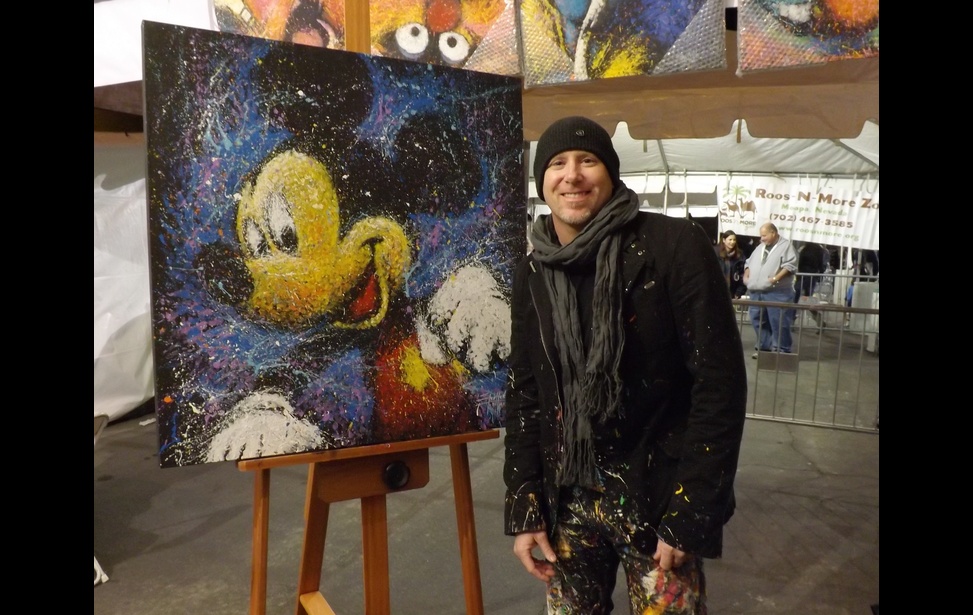 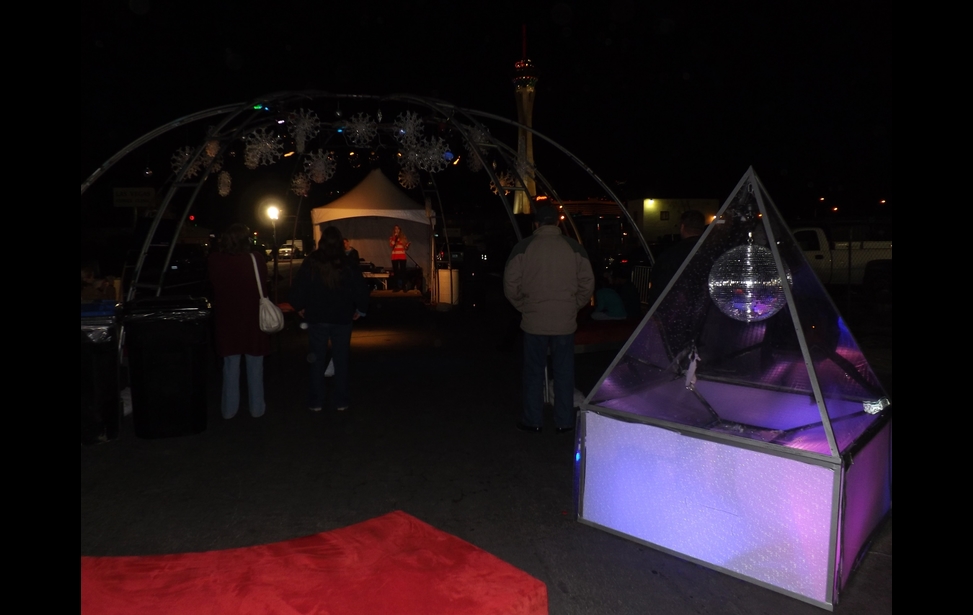 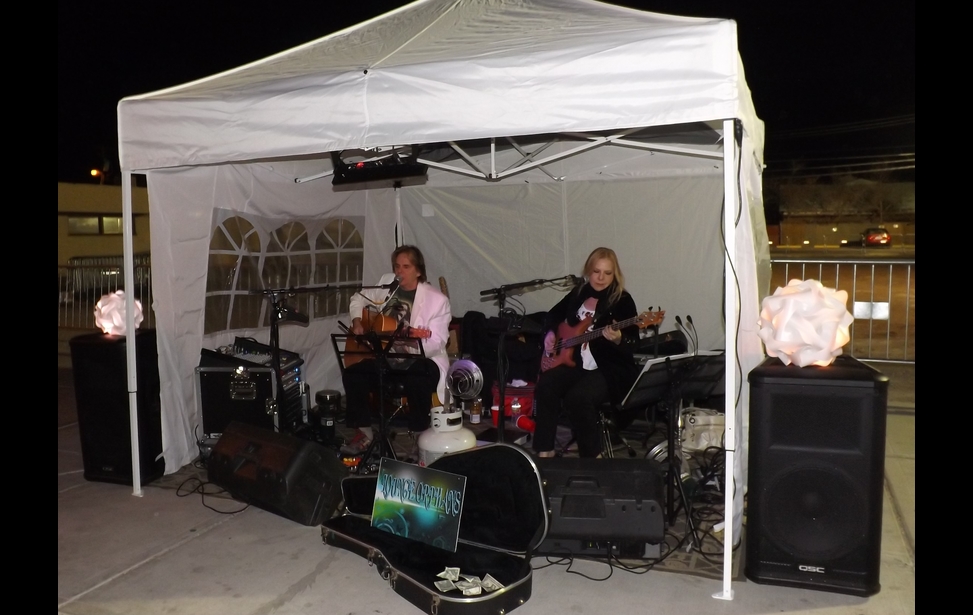 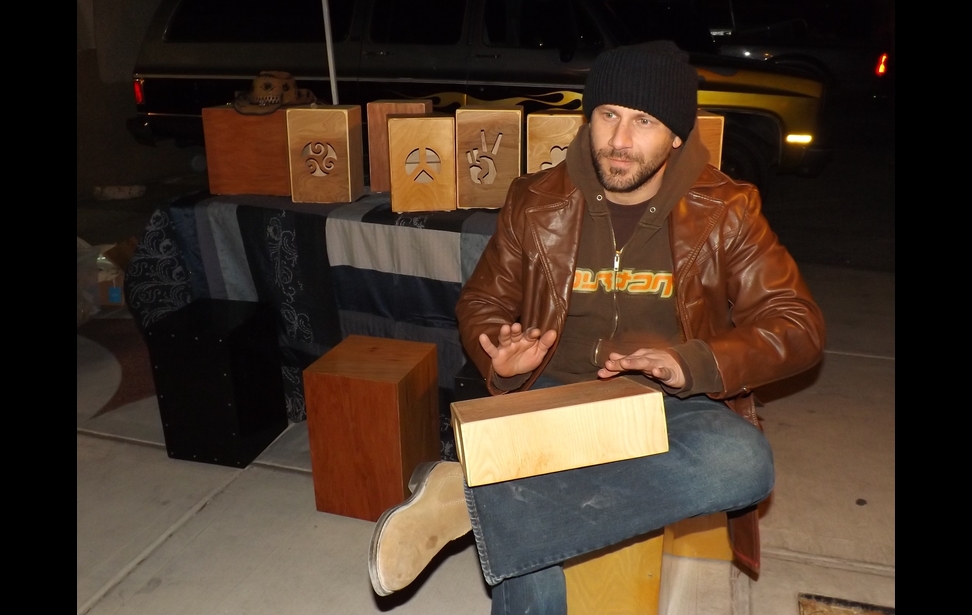 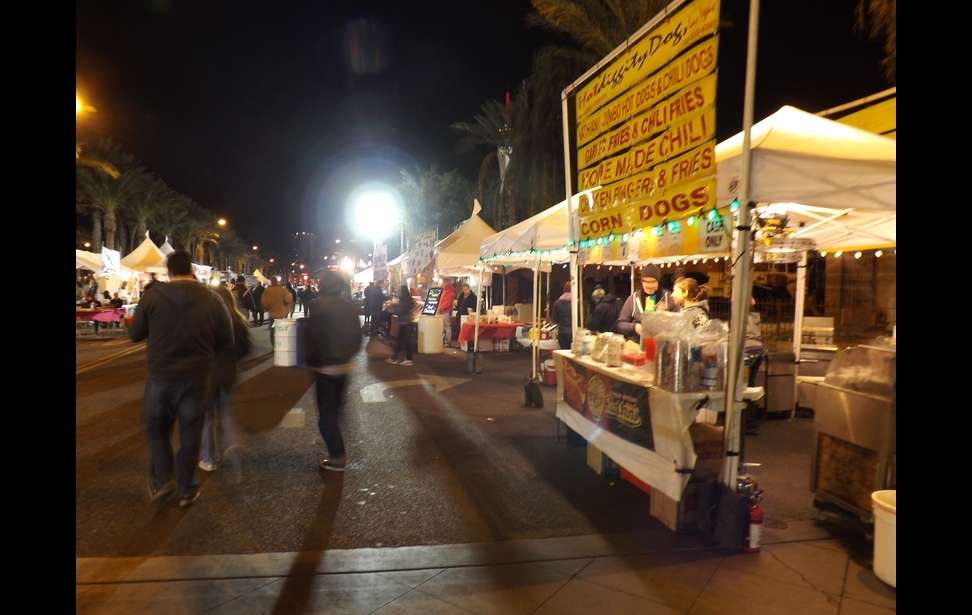 LAS VEGAS, NV -- When you think of Las Vegas, chances are you don’t think of art. And if you do think of art, it might be large curated shows at casinos, like “Da Vinci – the Genius” at the Venetian or “Warhol Out West” at Bellagio.

But in the downtown core north of The Strip, a lower-key yet higher-energy show for the masses takes place on the first Friday of every month — hence the festival’s name, First Friday.

“It is the only ongoing community event of its kind, and each month brings over 22,000 people including visual artists, culinary artists, musicians, literary folk, and the community from all walks together,” says Charles Ressler, First Friday’s PR and Marketing representative.

The cultural festival celebrated its 10-year anniversary in October, 2012; however, it experienced its biggest growth during the previous year, almost tripling attendance from 8,000 to 22,000 (as seen in photo 1).

The credit for that growth goes to long-time event promoter Joey Vanas and his team, who took over festival operations in October, 2011. While Vanas is in the forefront of running the show, the background support (moral and financial) comes from Tony Hsieh, the Zappos CEO who has made headlines for his downtown revival strategies.

One such artist is Rich Ariola (as seen in photo 2) of Artistry in Metal, a sculptor who welds impressive creatures and figures from found metal objects. (as seen in photo 3) “I like showing my work at First Friday because it provides a chance to talk to people about my work in a very relaxed atmosphere,” he explains.

His larger pieces are slow to sell, but he’s had some success with the smaller ones that are priced under $250. He also caught the attention of the head of promotions for the Venetian, which resulted in two of Ariola’s pieces being featured in a month-long Carnevale Art Show at the hotel. His work was prominently displayed in the atrium, and even featured in the event’s brochure (as seen in photo 4).

Next for him is an exclusive show at the City of the World Gallery’s Main Room, an opportunity that came about when the curator and several board members spotted his pieces at First Friday.

Another festival favorite is Sarah Flake of Flaky Friends (as seen in photo 5) who creates whimsical stuffed animals — like vegetables, a naked banana, skeletons and a pitbull —  that each come with their own story.

Her byline is “Plush with Issues,” and Flake found challenges selling them at other craft shows where people just didn’t get it. However, “First Friday is the kind of crowd that’s artsy, that’s looking for something different, something that doesn’t have to be pretty or perfect. They look at my toys and think, ‘Oh, my gosh, these are so weird, I love it,’ as opposed to ‘This is so weird, what’s wrong with you?’” she laughs.

An artist who uses his day job to inspire and further his art is lumberjack and wood sculptor Milan Weedman (as seen in photo 6). Working with a chain saw, Weedman uses trunks from the trees he cuts down to create large native-inspired totems and masks.

“Most professional artists who are involved with First Friday are able to pay all of their overhead and bills for the month from this one night of commerce,” claims Ressler. “We really believe in assisting the artistic community in cultivation, and so a new artist will be grown by the team and helped to build a following.”

For kids and budding artists, The Chuck Jones Experience gallery at Circus Circus brings in prominent guest artists to demonstrate and teach their skills at First Friday’s Kid Zone. Just attending two shows allowed me to meet legendary animator Ron Campbell (as seen photo 7), best known for The Yellow Submarine, the Flintstones and Scooby Doo, who drew his famous dog for my son; Jimmy Mulligan (as seen in photo 8), one of the youngest animators ever to work for Disney, who drew a picture of Goofy for my son; and pop artist Stephen Fishwick  (as seen in photo 9) who creates fantastic cartoon-inspired paintings on the fly, using his hands instead of paint brushes.

Don’t forget the 20 to 30 bands that play each month. “All musical genres are represented depending on the theme for the month,” explains Ressler. Some of them are up on large stages, some of them are singing under small tents (as seen in photo 10), and some are just busking on the street. Strolling through the festival, you can be serenaded by pop covers, folk guitar, island-flavored percussion, and jazz piano, with the soundtrack changing every few steps.

And then there’s the hybrid artists, like Jeff Murphy (as seen in photo 12), a percussionist who makes and sells wooden box-shaped drums at the fair — and plays them from his rented sidewalk space. With unique cut-outs adorning the fronts, some of them have snares inside for a classic drum sound, while others sound more like bongos.

When you get hungry from walking around, food is just a stone’s throw away. The strip of food trucks and vendor booths primarily have a street-friendly, fair-food flavor, with cute and sometimes punny names like Hot Diggity Dog, Thai Harder, Haulin Balls, Roamin’ Dough, 3Potato4, JoJo’s Jerky, Pop’s Kabobs, and Fat Daddy’s Ice Cream. (as seen in photo 13)

But being Las Vegas, you can also get a beer or glass (er, make that a plastic cup) of wine to go with your corn dogs or funnel cakes, and walk around freely with it.

As Ressler points out, there’s really something for everyone; but even more so if you’re a fan of down-and-dirty simplicity — from the art to the music to the food — which, in many ways, is in drastic contrast to Vegas’s reputation for glitz and glitter.

You can join in the monthly festivities in the Arts District, where the area is closed to traffic south of Charleston Blvd. E. from Main St. to 3rd St., and along East Fremont St.