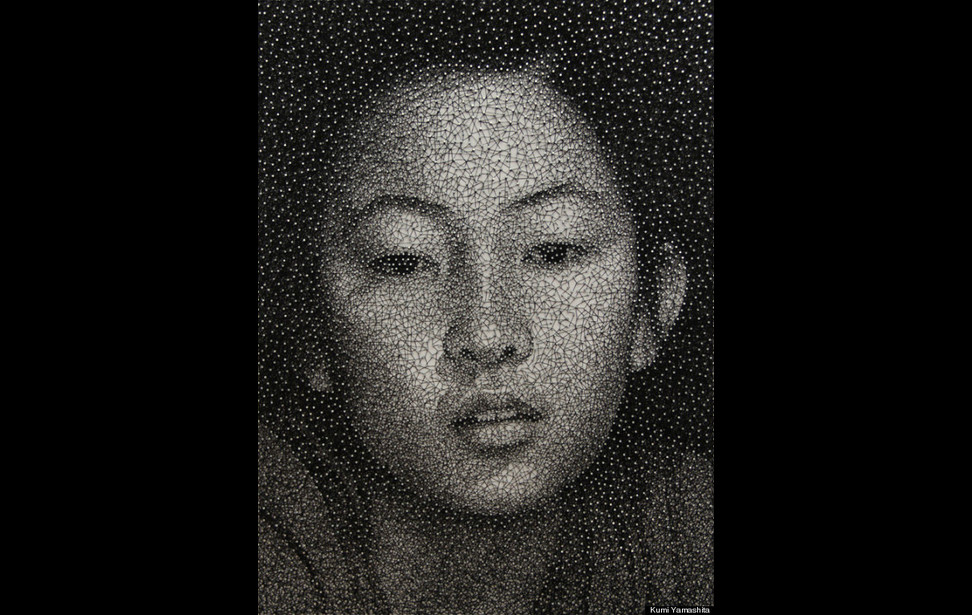 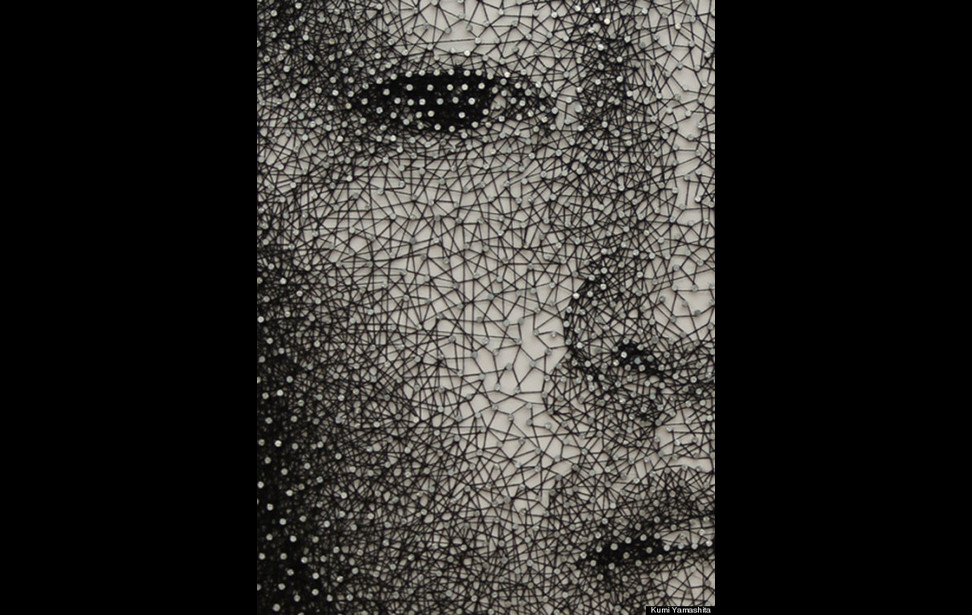 NEW YORK, NY -- You may not know her name yet, but Kumi Yamashita is a woman to watch. Born in Japan and holding and MFA from the Glasgow School of Art, she has begun delighting art lovers with her breathtaking portraits made from thread.  How? Yamashita uses a long, single piece of thread twisted around a huge number of nails, to create the pieces, overlapping with the thread where it needs to be darker, and making single passes to create the presence of light.  The result is a near photographic portrait, on par with the realism found in pointillism (as seen photo 1). Indeed, the presence of the many nails means that there are hundreds of tiny dots all across the finished piece, reminiscent of pointillism in reverse. The sheer amount of nails and the concentration required is mind-boggling (as seen in photo 2). Using an unbroken piece of thread takes a great deal of patience and skill to achieve such detailed results.

The series, called Constellation, contains several portraits, all utilizing a single piece of thread and a lot of nails. On her website, Yamashita says of the project: “This body of work consists of three simple materials that, when combined, produce the portraits: a wooden panel painted a solid white, thousands of small galvanized nails, and a single, unbroken, common sewing thread.” With just those items, Yamashita creates her masterpieces. When looking at the finished pieces, it is easy to see why “constellation” is a fitting title for such a series: The nails looking like stars, the thread tracing the lines between them, all reminiscent of literal constellations. The portraits’ nails and thread look like drawings of the way that we view star charts and trace constellations in the sky.

Thread and nail art in itself is not new, and a variety of pieces can be seen here. But as one can see from the comparison, Yamashita’s work is unmatched in intricacy and detail.

Yamashita lives in New York, where she works with a variety of media and on many types of projects. She has been featured in solo and group shows, as well as been commissioned by a variety of sources across multiple countries. She has served as Artist in Residence at various locations across the US and abroad, as well as a guest lecturer. She has also received numerous grants and awards.

In addition to the thread and nail pieces, Yamashita has done sculptures, plate rubbings, drawings, and worked with paper, glass, and linen. Her willingness to explore the use of materials in new ways is what draws people to her and it is safe to say that we will see more great things from this unique artist with such skill and talent.  More of Kumi Yamashita’s work can be found on here website.