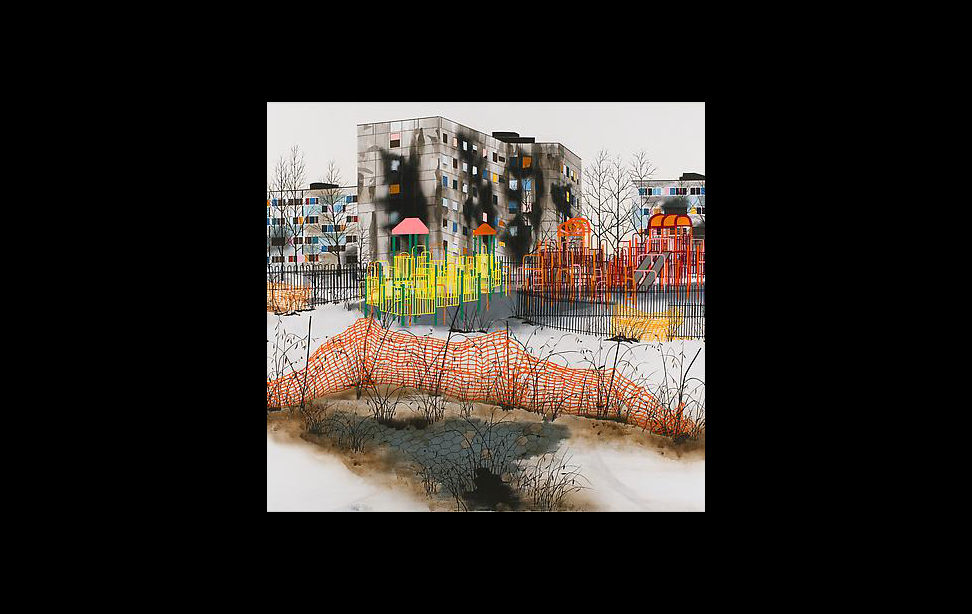 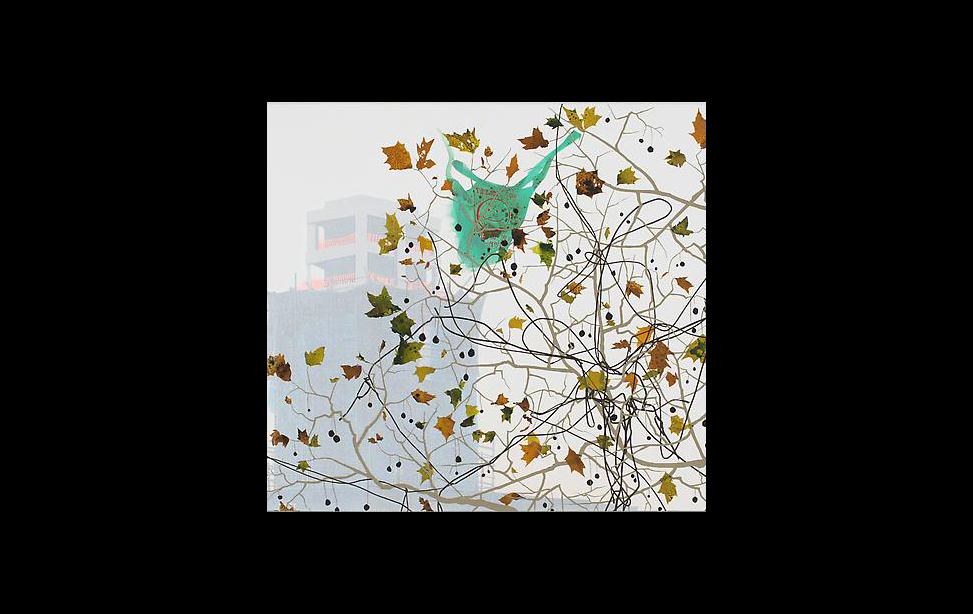 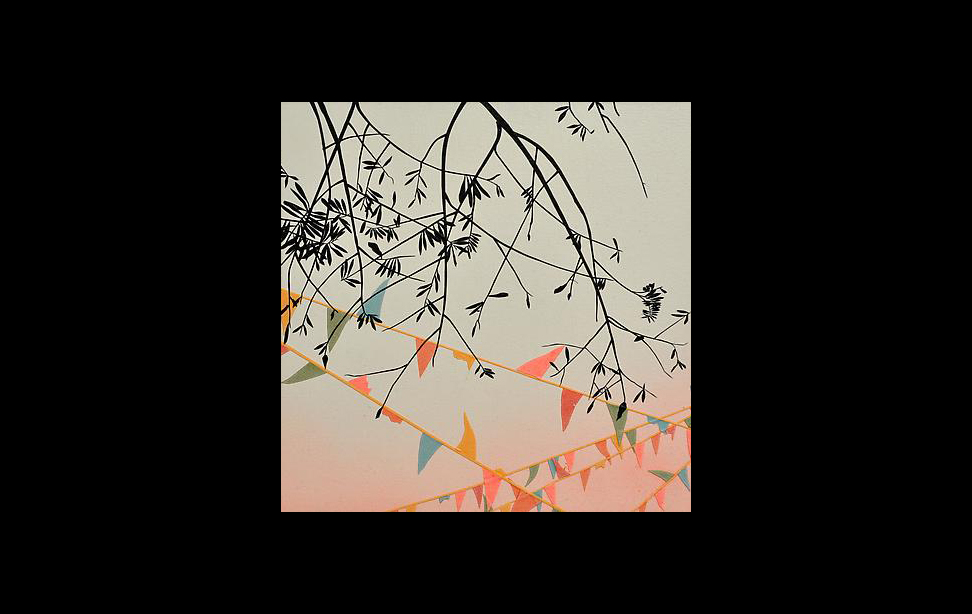 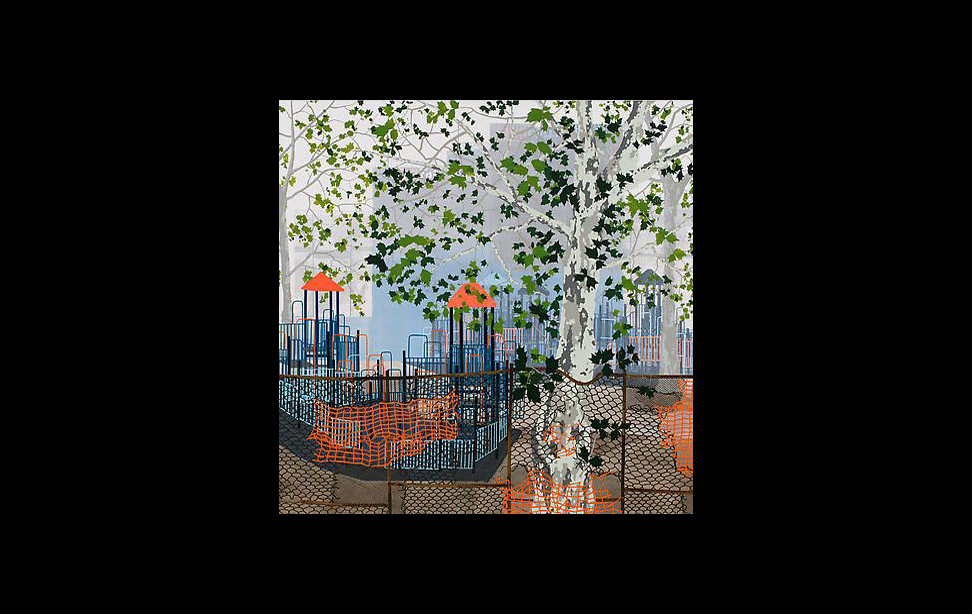 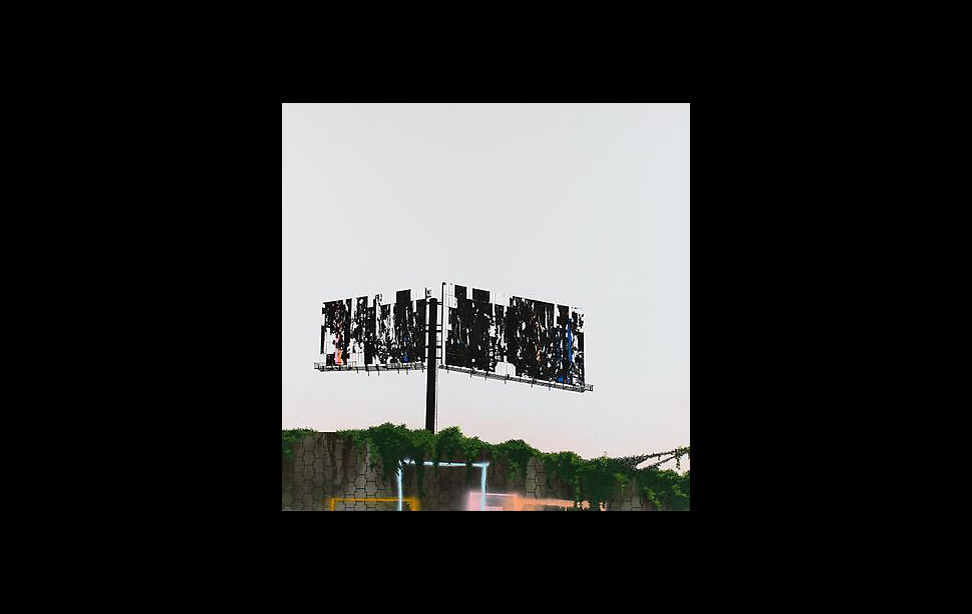 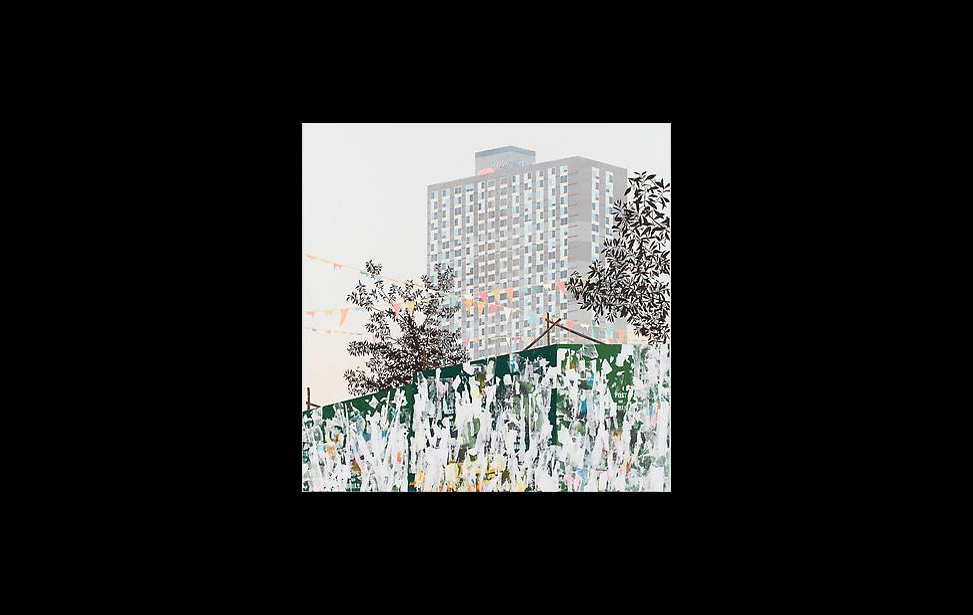 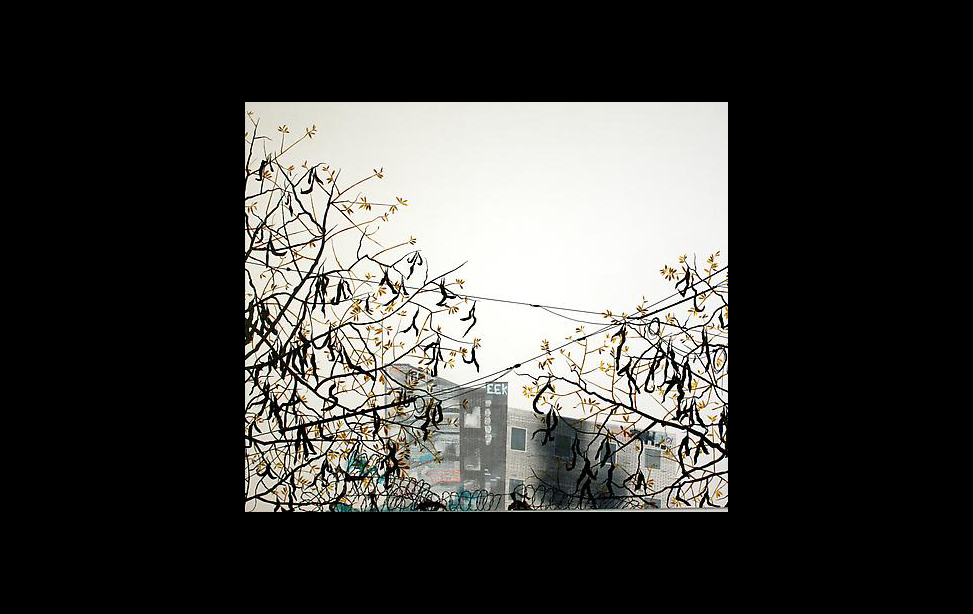 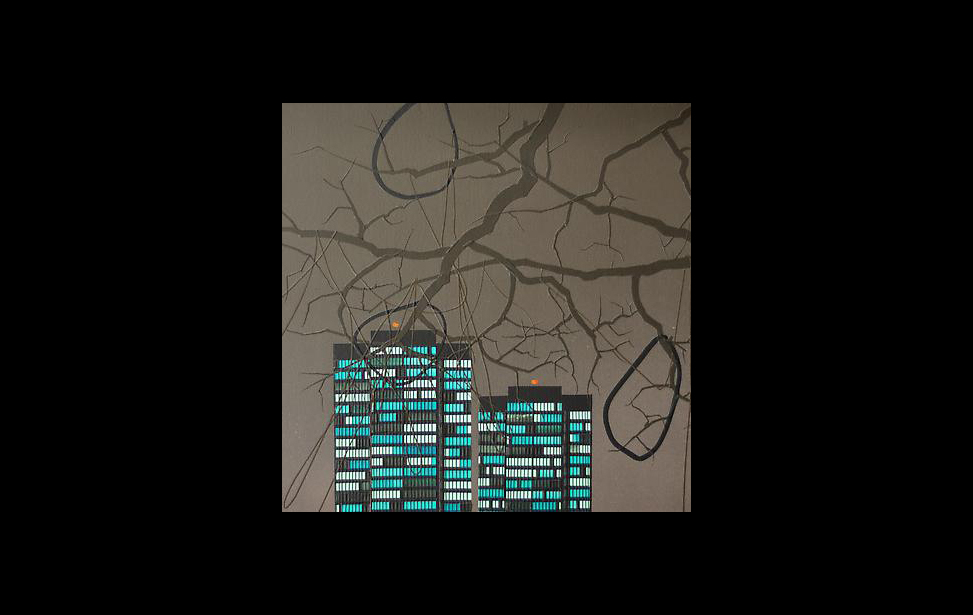 BROOKLYN, NY – Erik Benson’s style owes a great deal to the way he goes about putting a painting together. As such, his unconventional results are not achieved by traditional methods. He begins by pouring acrylic paint on to large panes of glass and letting it dry into thin sheets. Benson then uses an X-Acto knife to slice into the now-dry but elastic paint and incorporates the cut shapes like a collage on to the canvas—a method of painting by arranging the pieces of solid paint. While his work often comments on urban environments, it’s clear that the nature of his technique is more indebted to the architectural structures and city skylines of his subject matter than a traditionally-inclined landscape artist: the buildings he depicts appreciate the perspective and framework integral to his subjects’ construction—and by extension, guide the nature of his work (as seen in photos 1- 8).

thalo: What advantages does your technique afford you creatively, that you might not have using more traditional methods?

Erik Benson: I like how the technique has a set of rules to an extent. I like that there is a sense of construction and building that mimics the subject matter as well. There is a kind of meta-painting that happens by actually building the architecture in the paintings that doesn't happen with just painting the image of that architecture. It is an image but it has an autonomy of it's own after I make it.

th: When I look at your work, I’m often reminded of Japanese prints, graphic commercial art and sometimes, even hints of some stylized comic book art. What would you say are your strongest influences?

EB: My influences really range from a lot of different things. From painting as a language to music to living in the city—it really just depends on the day. Japanese prints are obviously important to me, stylistically yes, but I think because when I'm working I'm not always interested in making something "look like it does" with perspective or scale. I want it to make sense in the painting first rather than as a depiction. I guess I think of Cezanne a lot in that regard. It's influenced by an apple but it's a painting of an apple. If that makes sense.

EB: Lately, I have returned to painting back into the work. I think because I started using watercolors as a way to work out images. Almost like a drawing. I have also started painting on thin plastic and pulling those images off and applying them. They have been little things of graffiti. It gives a little more realism to the paintings rather then making them out of cut and applied paint.

th: When preparing to start a new work, what’s your conceptual plan like? What are your strategies to move from initial ideas to finished products?

EB: Usually I have an idea. Sometimes it takes more than one painting to accomplish that idea. I hate to say "series" but in a way it's like working that way. I have an archive of photos that I take just walking around. Sometimes certain images ring a bell and want to be the start of a painting. Things just find a way to seep into the paintings at some point. Lately I have been working with this subject of "High Rises." It's sort of dealing with how buildings and their surroundings decay and age, but also how they are used and lived in.

th: Your works often combine depictions of man-made structures and elements of the natural world in urban environments. Ultimately, how integral to your expression is your exposure to the urban landscape? You live in Brooklyn, but to what extent do you find that the scope of your vision is tied to city life?

EB: I'm not sure. I think that right now living in Brooklyn is an influence, but I'm not sure it has to be. I guess I won't know until I'm not living here. I do think that the ideas are bigger than just one city, or city life in general. I think they have a lot of social and economical ideas in them. There are politics that influence the paintings, as well as just plain aesthetics of enjoyment of your surroundings.

th: How important is scale to your work? How does the size of your canvas contribute to your intended vision?

EB: It is, I guess.  I tend to like things that are around 60 to 90 inches—sort of a traditional landscape format. I'm working on a painting now that is the largest thing I have done. It's 90 by 136 inches. It works almost as a backdrop or a one to one scale. It's like your entering into the work. I'm still figuring out how I feel about that, but it's interesting to say the least.

th: In dealing with concepts in your work, what role does the title play? Of course you have some untitled pieces, but how do you utilize the other evocatively titled works (like Pandemic or Pure Love) beyond merely pointing out to the viewer what’s already there in the art?

EB: I think some of my earlier paintings like the one's your referring to, had more romantic titles. Almost like pop songs or something like that. It was a way of setting a mood to view the work. Lately they work a little more as nicknames to concepts. Like "High Rise (99 cent store)"—something like that. It's usually just a way to locate a viewer to the idea of the painting.

th: After creating as many thematically linked pieces as you have, how do you continue to develop fresh ideas about your chosen subjects?

EB: I think just through continuing to paint. I never really feel finished per se with something. It's more of how it was in that moment in time, rather than how it is forever. I think these works with the watercolors are opening up a lot of new paths. I'm able to make things that are more appropriate to how they are as I see them in the real world. For example, by making a painting of a tree, I can focus on the abstract qualities of bark. This allows me to pour out a pattern that is seemingly abstract but when cut and formed into trunks and branch shapes it make a tree.

th: Speaking of the future, where is your inspiration currently taking you—that is, in relation to what you’ve already established in your body of work?

EB: I'm currently just about to start about 3 different conceptual image ideas. These will probably consist of about 5 to 8 paintings for each. I think the challenge for me is to be engaged in each idea separately but to always find a way to relate them back to one another. It's going to be a tough challenge but I'm really excited to see where the work takes me.