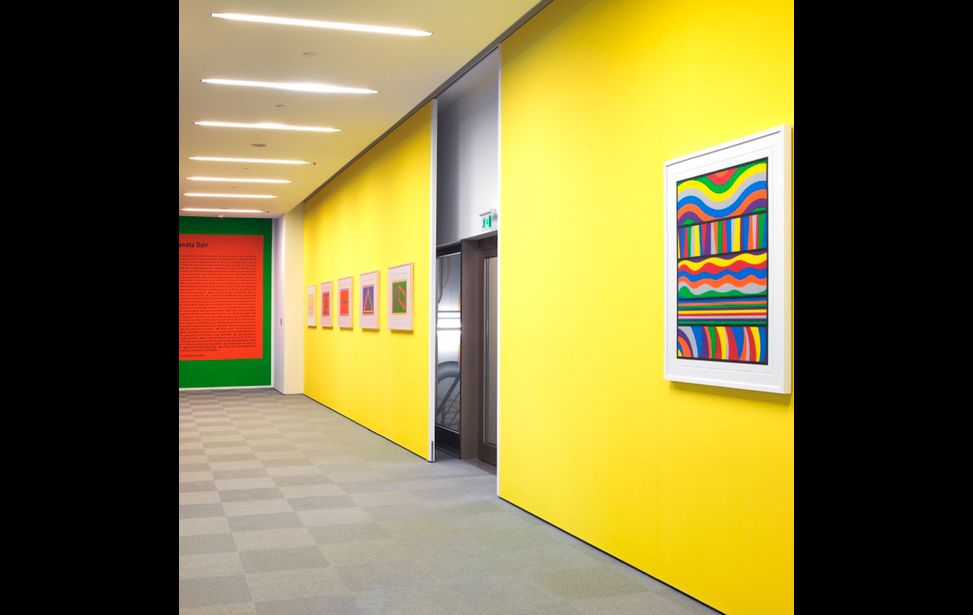 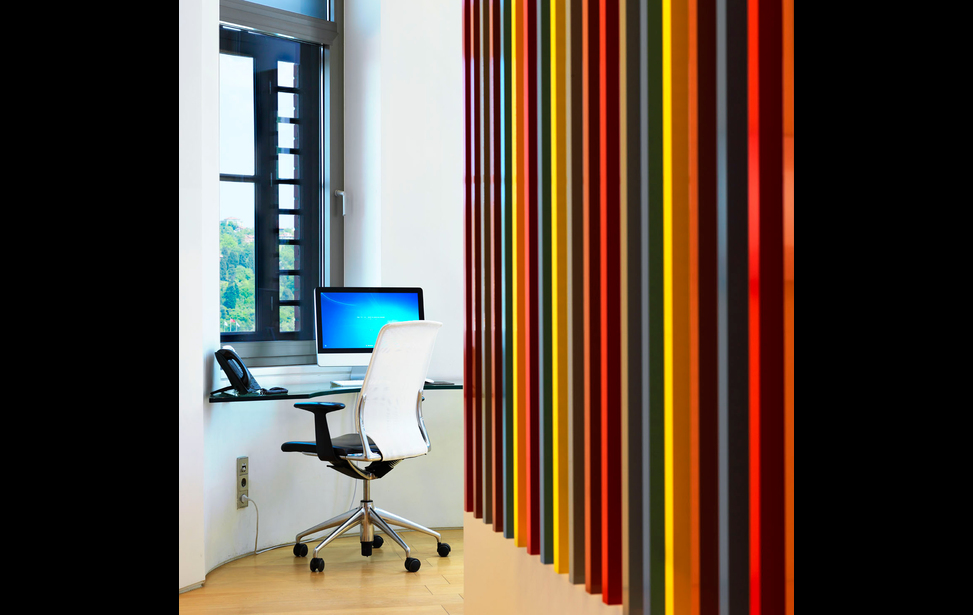 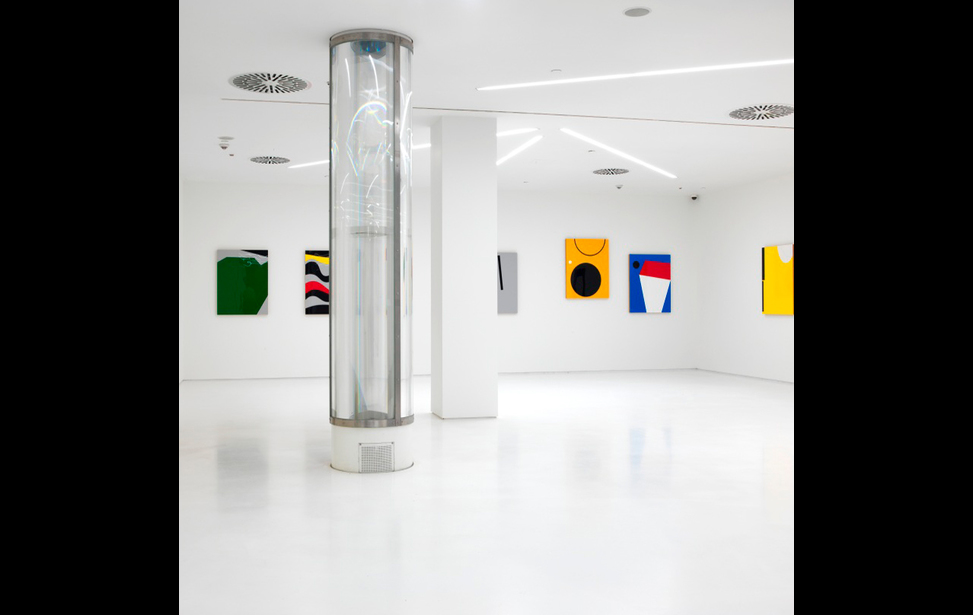 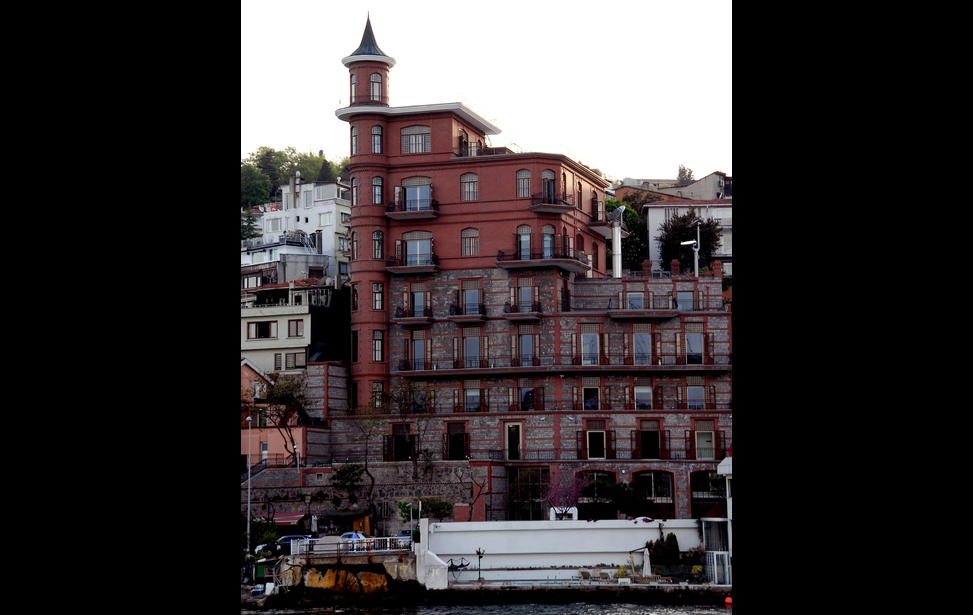 ISTANBUL, TURKEY – A corporate headquarters during the weekdays that turns into a contemporary art museum on weekends? That’s the idea behind Borusan Contemporary, Istanbul’s newest private art museum. This unusual venue, which opened last year in the waterfront neighborhood of Rumelihisari, embraces a concept unique in the city – if not the world.

Every Saturday and Sunday from 10am to 8pm, the headquarters of Borusan Holding, a major Turkish conglomerate, are opened to the public as a museum. After purchasing an admission ticket, visitors are free to wander through the entire building – including even the office of the Chairman of the Board – to view the art on display. A series of Sol LeWitt linocuts might adorn a hallway (as seen in photo 1) while photographic prints by Michael Kenna hang on the wall behind a row of cubicles. (To allow visitors to better focus on the art, employees are asked to clean off their desks at the end of each workweek, as seen in photo 2.)

The museum focuses on new media art, photography, video art and light installations – fitting for a corporation that operates in the energy, logistics and steel sectors. Borusan Holding is known for its strong commitment to the arts, sponsoring the Borusan Istanbul Philharmonic Orchestra, artist residencies and other arts-related programming. Board Chairman Ahmet Kocabiyik has been collecting art for some 30 years, and pieces from his collection were on display in Borusan workplaces even before the office-museum opened.

“Borusan Contemporary’s mission is to contribute to the development of contemporary art in Turkey, to open new horizons for young people, and to help them become interested in and appreciative of art. The corporation supports young, emerging artists and places great importance on art education programs,” says Borusan Contemporary museum director Guzin Tezcanli.

At any given time, the museum hosts two separate exhibits, organized by Turkish or foreign curators. The Borusan Contemporary Art Collection, largely consisting of works from after 1990, features internationally known names such as Jim Dine and Robert Mangold, as well as important Turkish artists including Ayse Erkmen and Ekrem Yalcindag. Selections from the more than 600 pieces in the permanent collection are exhibited throughout the building in six-month installments called “Segments.” Running through November 18, 2012, “Segment #2” includes works by Robert Mapplethorpe, Chul Hyun Ahan and Shirley Shor.

Concurrently, a two-level dedicated gallery space is given over to temporary exhibits that feature significant contemporary artists from Turkey and abroad on a three-month basis. Most recently, “4to2floors” brought together colorful, abstract wall sculptures and installations by Gerwald Rockenschaub, in his first show in Turkey (as seen in photo 3). Between September 15, 2012 and January 20, 2013, the museum presents Austrian light artist Brigitte Kowanz.

A handful of other works, commissioned by Borusan as site-specific installations, are permanently on display, among them a neon tubing “chandelier” by Keith Sonnier and a bronze sculpture by Andrew Rogers. Particularly memorable is multidisciplinary Spanish artist Daniel Canogar’s “250 K,” a chaotic yet beautiful arrangement of recycled copper cables that dangles in midair as flickering lights projected on the wires create mesmerizing patterns of darkness and color.

For all the cutting-edge art to be found inside Borusan Contemporary, the building itself is a century-old historical landmark. Popularly known as the Perili Kosk, or “Haunted Mansion,” the ten-story, turreted, red-brick edifice (as seen in photo 4) was built in the 1910s as a private home for Yusuf Ziya Pasha, an Ottoman official. After extensive reconstruction and restoration work in the early 2000s, Borusan moved into the building in 2007, opening the museum four years later. With stunning views of the Bosphorus as a backdrop for the art, it’s nothing short of inspiring.