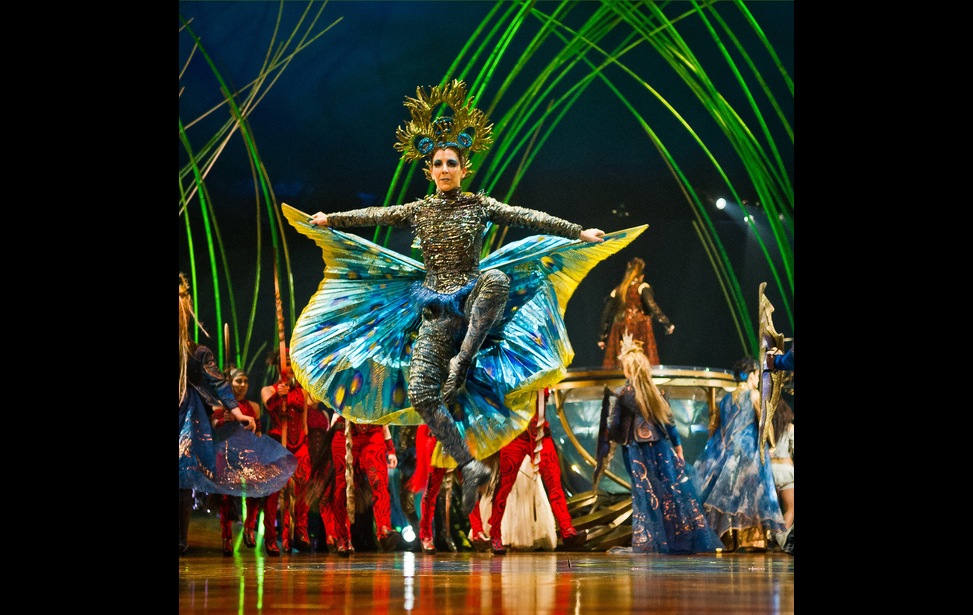 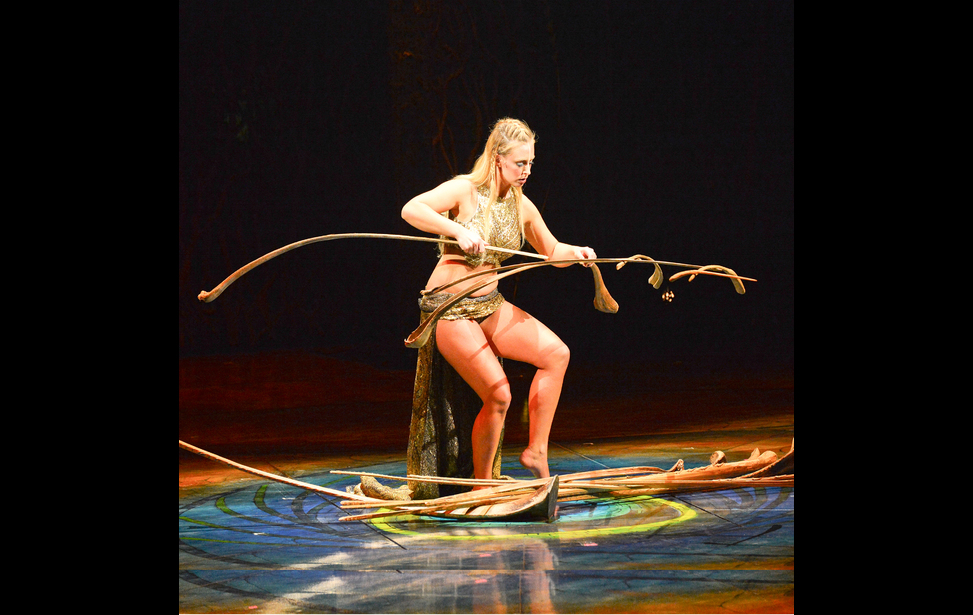 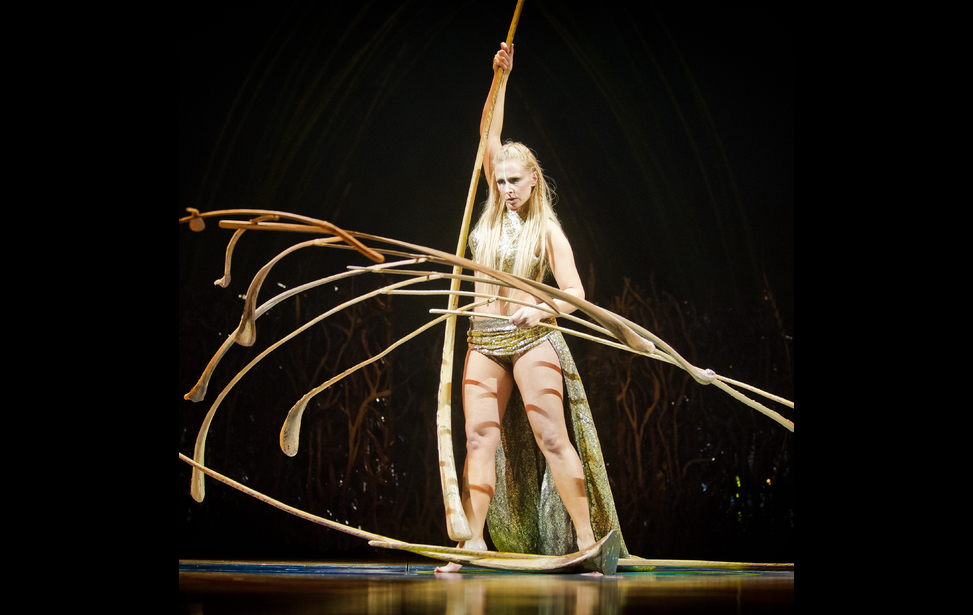 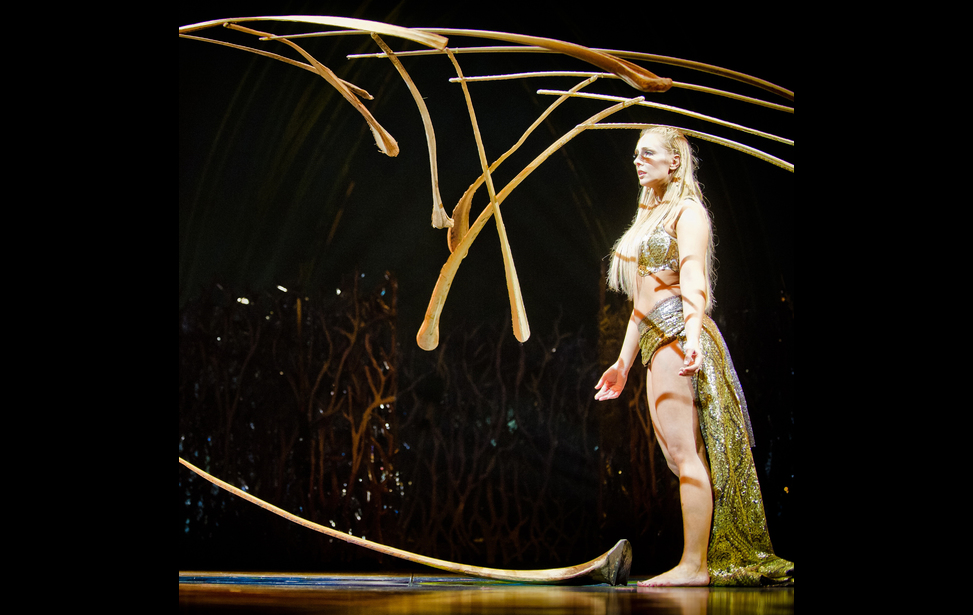 The shows of Cirque du Soleil are world-renowned for their jaw-dropping spectacles, awe-inspiring performers, and innovative aesthetics. With shows running on nearly every continent, Cirque du Soleil has become an auteur in the world of performing arts. To arrive at this point of tremendous success and popularity, Cirque du Soleil has developed their shows around unique acts, originating from every corner of the earth and born of every walk of life.

Enter Lara Jacobs, a Swiss-born performance artist currently on North American tour with Cirque’s latest creation, Amaluna (as seen in photo 1). Amaluna  tells the story of Miranda, a girl transcending across the threshold of womanhood. Set in a garden rich with nature and culture, ruled by goddesses and the moon, Miranda seeks love and balance as she endures her emotionally tumultuous transition. The role of the Balance Goddess, played by Jacobs, emerges at a pivotal point in the story, teaching the young lovers an important lesson about the fragility of life and love. In her act, entitled “Manipulation”, Jacobs ever so slowly and with the utmost concentration, creates a nearly 45 lb. mobile of 15 palm ribs, each one perfectly balanced by another. Jacobs utilizes her entire body in the act, reaching for each branch with her toes, as her chest heaves with audible meditative breath and her arms hold soft but strong (as seen in photo 2).

thalo spoke with Lara Jacobs about her unique act, how it came to be under Cirque’s esteemed spotlight, and why she thinks humans are so drawn to the beauty of balance:

thalo: How did your act become part of Amaluna?

Lara Jacobs: From what I have heard, someone showed Guy Laliberte, founder of Cirque, the Youtube Video of my father, Maedir Eugster, doing the act on Le Plus Grand Cabaret du Monde (a popular European television show), in Paris. I was told that (Laliberte) never watches an entire act, but that this one he did. He really liked it and wanted the act to be part of Cirque, so someone contacted my father. Since my father runs his own company and is very busy with galas, events, and a new project, it wasn’t possible for him to do such a long-term tour. He agreed to license the act, and Cirque held a casting in search of an artist who could possibly represent it.

No one else ever even thought of touching the branches; it was always my Dad’s thing. But when my father asked me if I wanted to go to the casting ...of course I was excited.

At the casting I was super nervous and overwhelmed. There was so much going on, so much creativity, people, artists, costumes. I was wowed. I was also nervous, of course, because performing at Cirque is one of the highest achievements for any performing artist.

th: How did Lara Jacobs, the Balance Goddess, come to be?

LJ: Balance was always my thing. I have been passionate about tight wire since Kindergarten. At six I had my first trapeze act in my family’s nouveau cirque show. At sixteen, when I joined a professional dance school, it was my balance that got me into higher levels. I could hold my arabesque and passé forever. My legs have always been pretty strong and high, as they say in the dance world, so it was not a problem to stay in plié for fifteen minutes or longer.

After I was chosen at the (Amaluna) casting in Montreal, I started training right away. I had never done the act myself. I had to start lifting very heavy weights.

Right away I started picking up the branches with my toes. It was natural for me to stand on one leg and do the work with the other leg. It became my personal thing.

th: How does your act fit into the storyline and themes of Amaluna?

LJ: It’s perfect for the show. My act demonstrates how every little piece in the mobile has the same importance, just like on planet earth. The big fish are not more important then the small; everyone plays its role, and we tend to forget that sometimes. But with the smallest winds, or when the smallest branch is removed, everything can fall, just like life, or many moments in life (as seen photos 3 and 4) . The mobile resembles the world as much as it represents your own simple life. It’s about fragility, and the endless journey to find balance.

th: Why do you think audiences are so captivated by your act?

LJ: We live in a very fast world. Everything needs to happen fast and people have no patience for anything anymore. There are a million things going on at once and everyone is always trying to top each other. But when you really listen to your needs, I think we could all need less: less technology, less noise, less glimmer and glamour, and should just appreciate the more simple, touching, and meaningful. I think that is what my act offers.