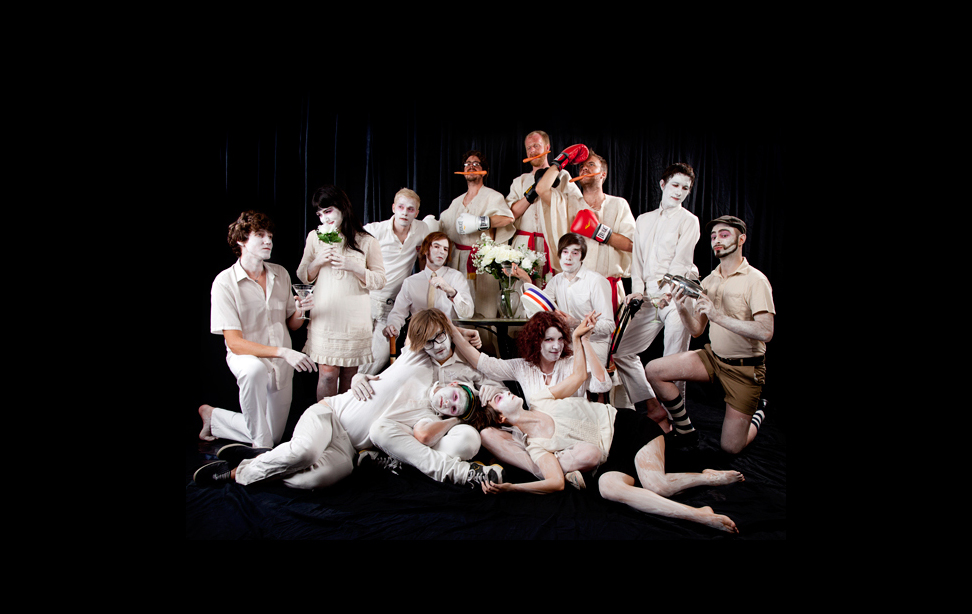 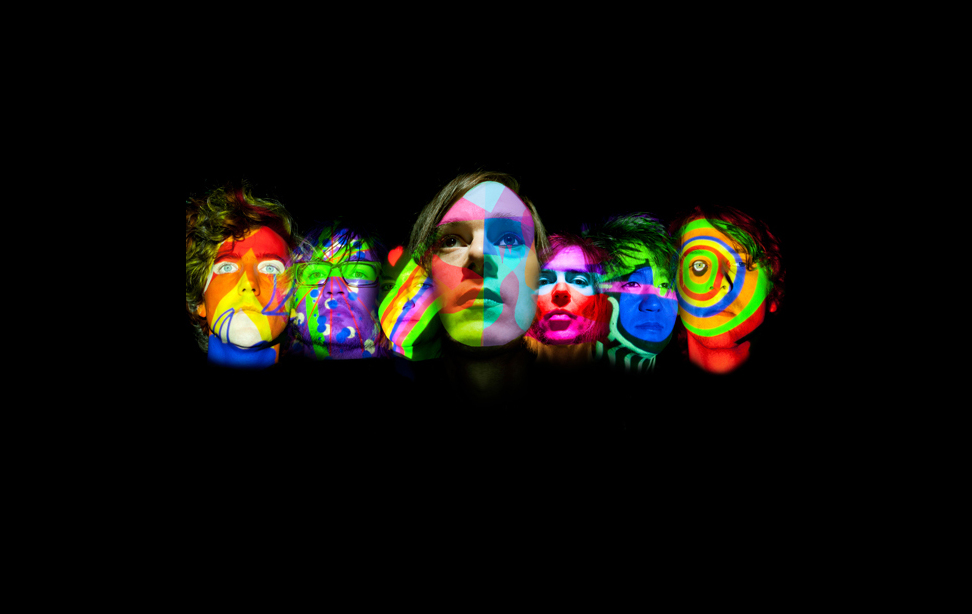 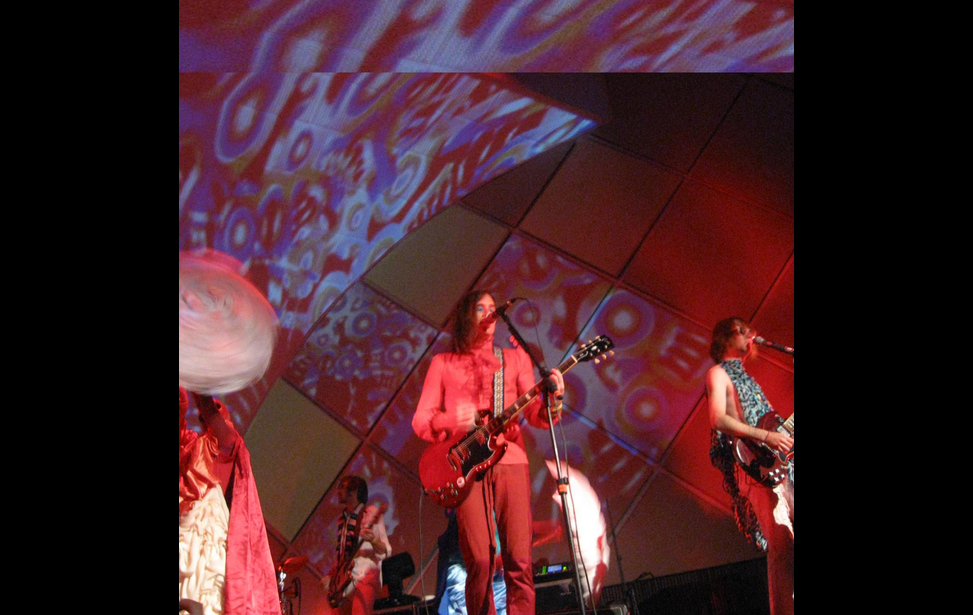 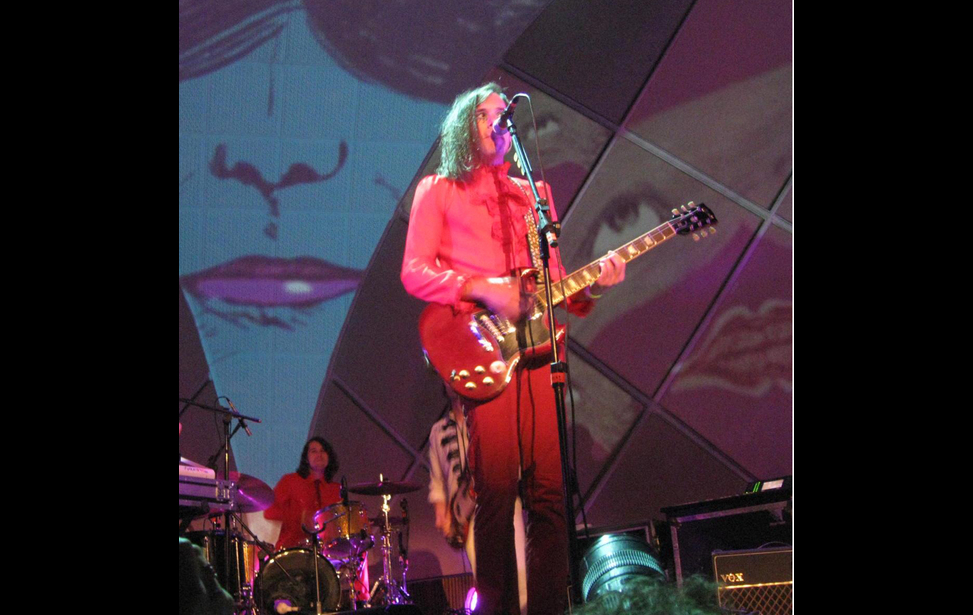 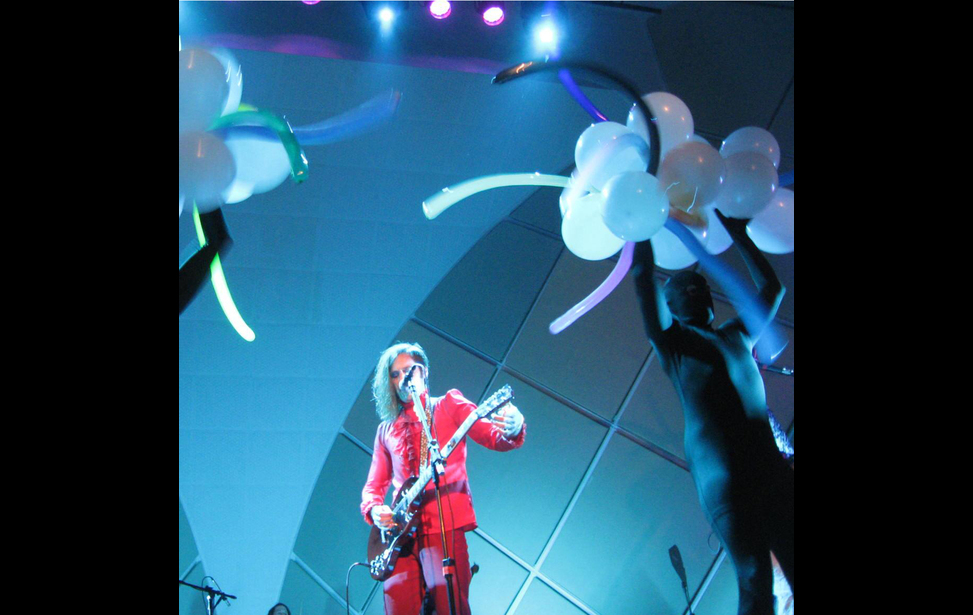 On their recent tour, Of Montreal continues to give the most crestfallen songs of visionary singer/guitarist Kevin Barnes the colorful and uplifting interpretation they deserve.

SÃO PAULO, BRAZIL -- Danceable twelve-minute exorcisms followed by terse, poppy tracks glorifying the power of the human mind. A crowd unexpectedly decorated by a parade of amorphous balloon sculptures jettisoned from the stage. An impossibly thin and shirtless vocalist sporting long hair on only one side of his head, writhing behind his guitar while day-glo video mapping patterns morphed over him. These were the strange manifestations of the most recent São Paulo show from indie rock darlings Of Montreal (as seen in Photos 1 and 2), whose visually striking performance was buttressed by a well-crafted set list featuring both the underground staples that have made them internationally beloved hipster icons and a taste of songs from their latest collection, Paralytic Stalks. The song selection and the show’s visually engaging elements made for an uplifting night in a hotspot on the fringes of Liberdade, the city’s most traditional Japanese neighborhood, in the year-old movie theater-turned-concert hall, Cine Joia (as seen in Photos 3 - 5).

For the uninitiated, Of Montreal is the slightly awkward moniker used by Athens, Georgia musician Kevin Barnes for both his records and touring live shows. And while many of the pieces in his sprawling discography of more than eleven studio album releases are actually Barnes working alone, he has also recorded under the Of Montreal name with guest musicians; in a live setting, he’s supported by a full group, delivering this one-man band’s often solitary recorded work with a completely different feel than what might be expected from his embarrassingly introspective songs. But presented in a celebratory and inclusive manner, Barnes and company’s set remained upbeat throughout, and unpredictable enough in their execution, that they remained free from any trite rock conventions.

Indeed, if a casual concertgoer didn’t know any better, the very nature of contemporary indie’s earmarks (obtuse riffs, experimental sounds, incomprehensibly personal lyrics) might have pitched expectations way down for a dour, disgruntled performance vacillating between inscrutably quiet passages and caustic attack on the audience. But for all of Barnes’s potentially disheartening messages (“Let’s pretend we don’t exist / let’s pretend we’re in Antarctica,” for example, from 2005’s “Wraith Pinned to the Mist (and Other Games)”), the camouflage of the ebullient melodies he employs kept the undulating crowd singing along. Lightly pogoing in place to the funk-flavored rhythmic bass lines, the packed house bought right into the band’s major key mantras with a gleeful selflessness otherwise associated with the communal enthusiasm of a cult member experience—minus any sinister undertones of being duped or being set up for a tragic end, of course.

The six-piece configuration Of Montreal utilized on this South American tour was responsible for providing the uptempo soundtrack for the evening, but this was ultimately only part of the reason for the event’s festive air. Much of the credit belongs to the inventive pair of fantastically costumed dancers, who provided plenty of participatory action, breaking the barrier between stage and audience numerous times with stage diving, confetti throwing and the aforementioned balloon sculptures launched over the heads of spectators. Every other song became permeated with a circus-like atmosphere thanks to the bombastic couple who made nearly a dozen costume changes; their incarnations included papier-mâché sex dolls complete with gargantuan breasts, gas-masked gala attendees, hunter versus wild pig, long-armed, long-headed white horse beasts straight out of a Dali painting, and faceless flesh-colored body stockings, among others. Between the projected blinking eyes gliding along the back walls and the Sgt. Pepper’s styling of the bassist, a 1960’s hippie “happening” feeling was certainly tangible. But rarely had any of the psychedelic practitioners given the world jubilant songs like the show’s closer, “Heimdalsgate Like a Promethean Curse,” nor had the old manic color guard ever approached the sing-along style of Barnes’ chorus. Pinned on a lyric about the human brain’s ability to control our mood—“C’mon, chemicals!”—all of Cine Joia joined in to sing the pleading refrain with him, taken in by the warmth of the music, where they remained well beyond the struggle with their own minds for happiness.