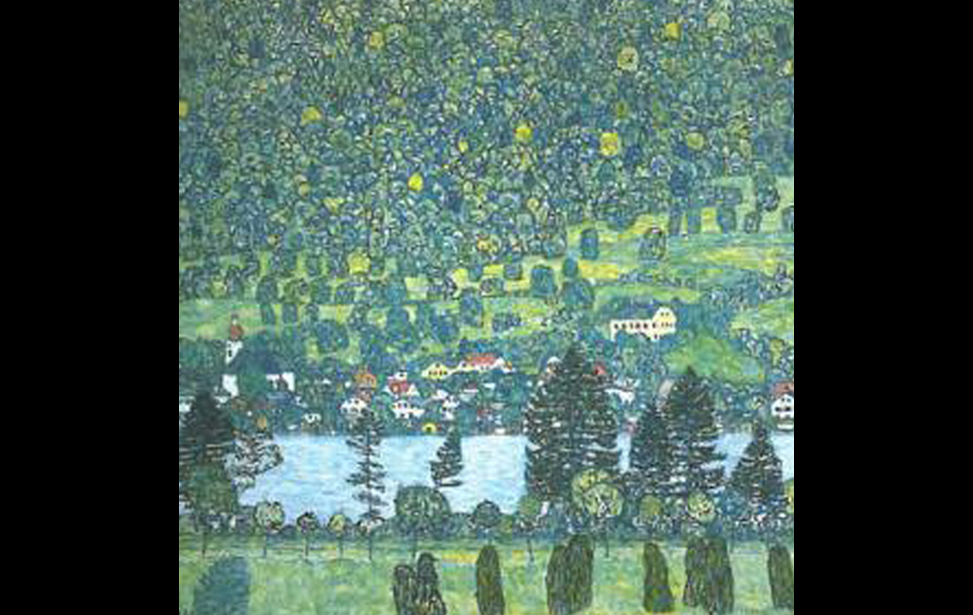 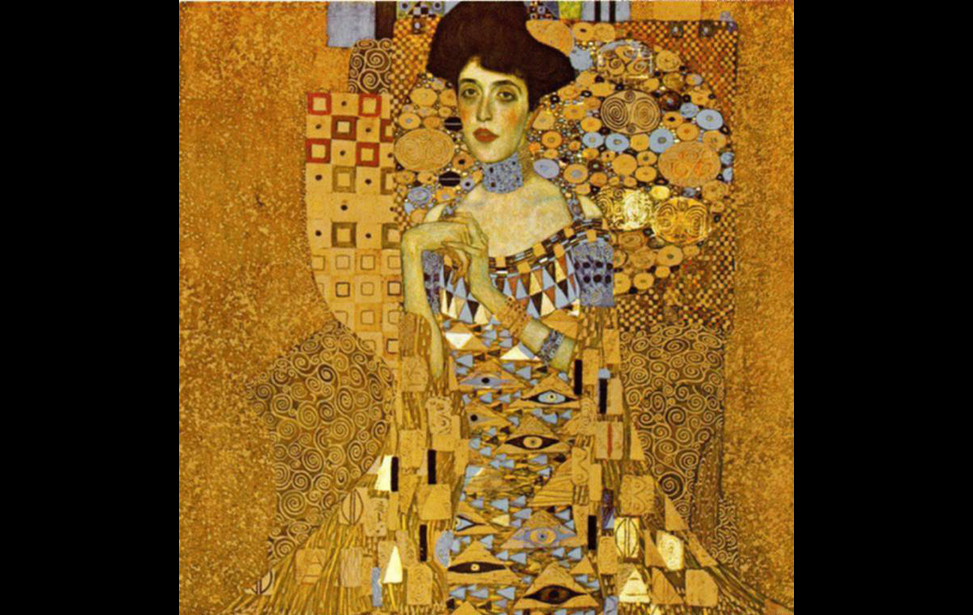 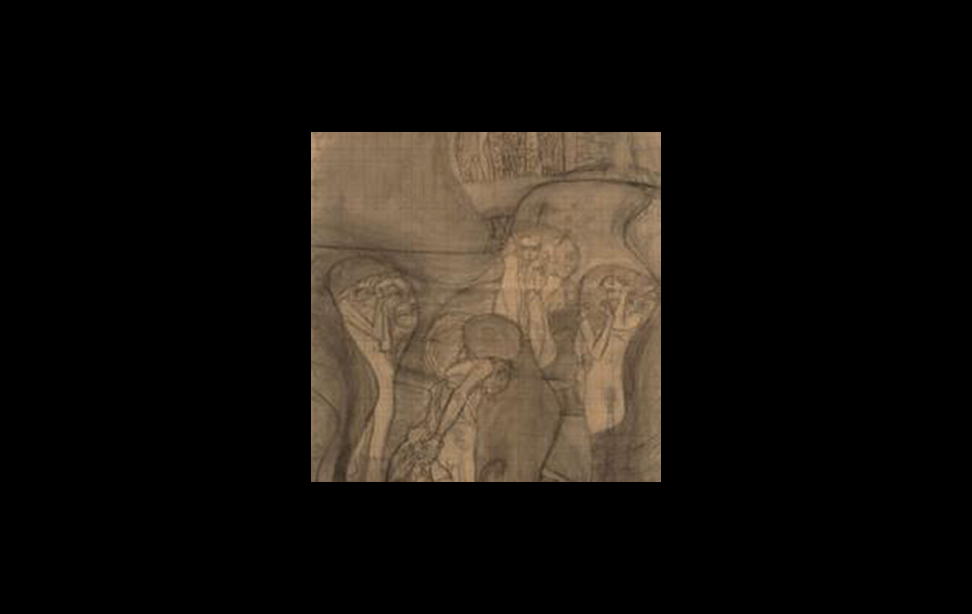 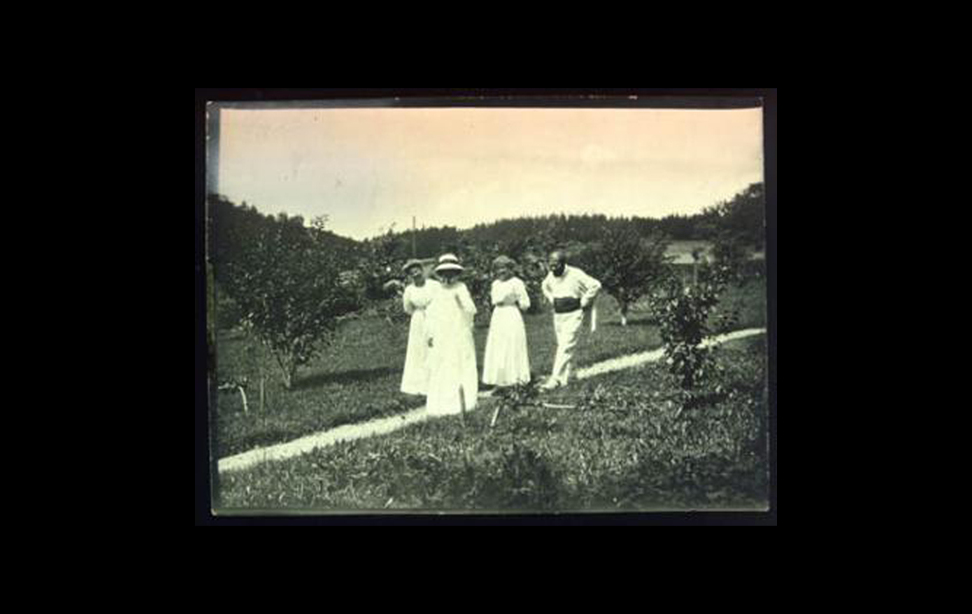 NEW YORK, NY—This summer, the Neue Galerie, a museum dedicated to the art of Austria and Germany, joins several Viennese museums in celebrating the 150th anniversary of Gustav Klimt’s birth with a special installation of the artist’s work. Among the paintings featured are Forest Slope in Unterach on the Attersee (seen in Photo 1) and Adele Bloch-Bauer I  (seen in Photo 2), one of Klimt’s most iconic portraits. A number of Klimt drawings are also on exhibition (seen in Photo 3), along with a collection of never-before-seen photographs of the artist with close friend Emilie Flöge (seen in Photo 4). Outside of the museum’s exhibition spaces, the celebration spills over into Café Sabarsky, where visitors can enjoy a slice of Klimt cake, the Design Shop, which sells gold and silver Klimt cufflinks, and the Book Store, where newly published Klimt studies are available, including a book called The Age of Insight by Nobel Prize-winning scientist Eric Kandel.

In The Age of Insight, Kandel writes about Vienna at the turn of the twentieth century, a time when the city attracted an array of ambitious scientists, artists, and intellectuals, whose convergence in salons spawned revolutionary shifts in their disciplines. In salons, the boundaries between the spheres of art and science were regularly crossed, providing grounds for a uniquely interdisciplinary exchange of ideas. Klimt, like many other Viennese artists, was well aware of advances being made in science and medicine. He studied Darwinian evolution, witnessed the dissection of cadavers, and observed human cells through a microscope. Klimt’s fascination with these subjects manifest itself in his works, including Adele Bloch-Bauer I, viewable at the Neue Galerie, in which “the small iconographic images on Adele’s dress are not simply decorative…they are symbols of male and female cells: rectangular sperm and ovoid eggs.”

Kandel explains how Viennese artists and scientists shared the belief that truth is to be found by probing beneath the surface of things. Medical doctor Carl von Rokitansky, for example, established a radically improved system for diagnosing diseases by recording abnormalities in the body’s interior noises, while psychologist Sigmund Freud called attention to the unconscious desires and aggressions lying in the depths of the psyche. Artists, too, felt compelled to turn inward, in part because the advent of photography seemed to nullify painters’ attempts to replicate three-dimensional reality, but also because of a growing interest in the rich interior lives of their subjects. About Klimt’s portraits Kandel writes, “Klimt and his disciples tried to help viewers look at art and themselves in a new, more emotionally introspective way that would acknowledge the psyche of the sitter and thus illuminate the unconscious anxieties and instinctual drives present in everyone.”

In effect, Viennese artists were able to convey the sitter’s emotional state in such a way that it is reproduced in the viewer— an anxious subject incites physiological signs of anxiety and a relaxed subject induces relaxation. This new approach to portraiture anticipated truths that modern science has since confirmed—that humans have an innate and nearly instantaneous capacity for empathy when confronted with images of others’ faces, hands, and body movements. In recent years, neuroscientists have discovered a special class of cells in the motor cortex called mirror neurons, which “are thought to reflect the actions and emotions of people in front of us.” In other words, the viewer does not passively perceive a painting but actively lives and experiences it. Each beholder constructs the work anew, coloring it with his or her own wealth of memories and associations, current mood and level of attention, knowledge of art history, etc. Trying to achieve a static, objective likeness is ultimately fruitless when a portrait is experienced differently in the minds of all who behold it.

If you visit the Neue Galerie this summer, you are likely to encounter some works that are new and others that you have seen many times before, but even the old favorites will be new in the sense that you have undoubtedly changed yourself. Perhaps one of the best ways to honor the 150th anniversary of Gustav Klimt’s birth is to bring an interest in modern science into an art museum. Knowing that your own mirror neurons are firing up as you gaze into the face of Adele Bloch-Bauer, or that the ornamentation on her dress represents the miracle of biological reproduction, will only enrich your experience of the art. Klimt himself would surely appreciate the new level of intrigue added to his body of work by scientific thinkers like Eric Kandel.

Photographs 1, 3, 4 courtesy of the Neue Galerie.