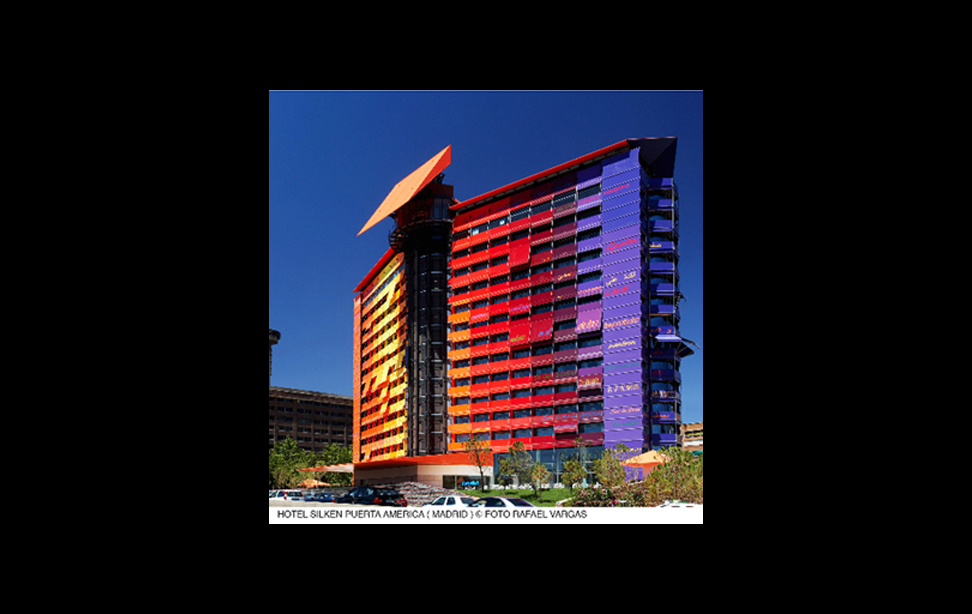 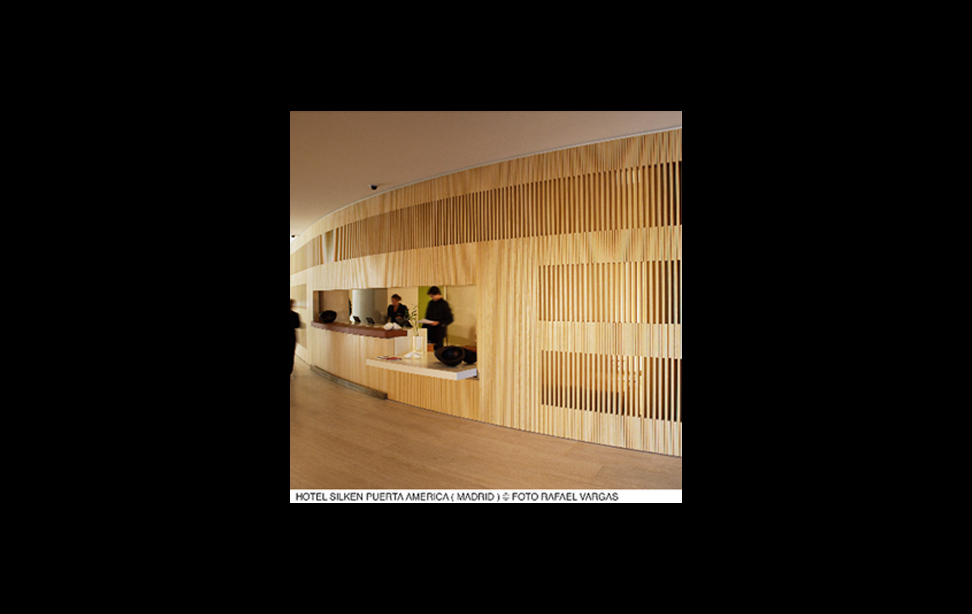 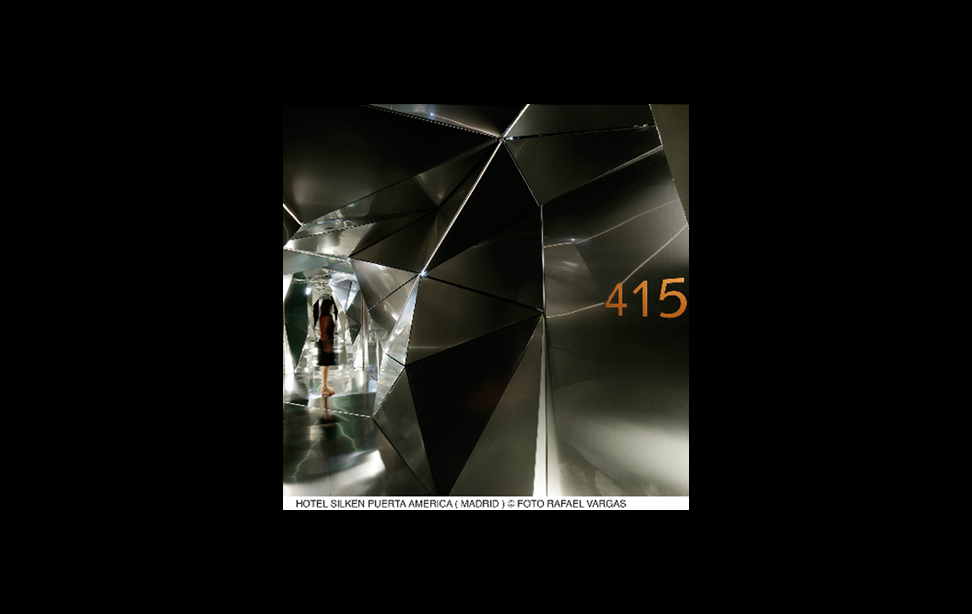 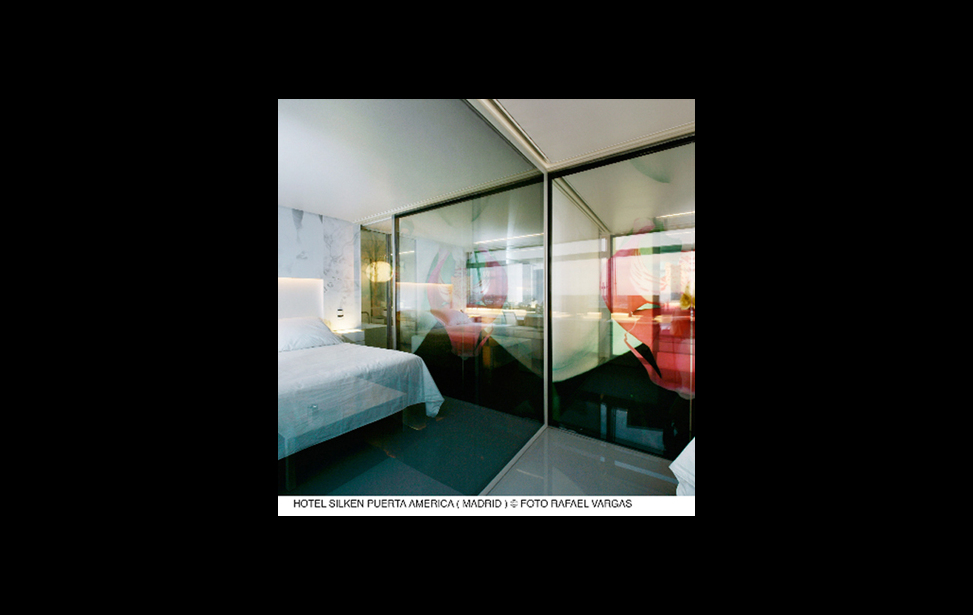 MADRID, SPAIN - Imagine entering a hotel where each floor is a window into a different architect’s full personal creativity. Where each time you exit the crystal elevator peering out over a cosmopolitan Spanish street, you turn around only to be transported into a vastly different space. This is Madrid’s Hotel Silken Puerta América, an architectural mission involving 19 top architects and firms from 13 different countries, all contracted to create the innovative space together.

“It is rare to be asked to design a hotel room without having to adhere to any type of restrictions,” explains English architect David Chipperfield, designer of the minimalist, two-tone third floor. “This has been my rare opportunity to design the kind of room I would like to find in any hotel.”

Whereas the interior of the hotel demonstrates the meticulous attention to detail and the luxuries typical of a modern 5-star hotel, the glowing red, purple and orange exterior designed (as seen in Photo 1)by French architect Jean Nouvel is what calls to the public. On the hectic traffic-packed street of Avenida de América in northern Madrid, the multicolored façade reads cryptic messages such as “On the bisected fruit of my mirror” or “windmill of shadows”, fragments from Paul Éluard’s poem Freedom translated into various languages.

The mis-matched, yet somehow harmonious messages splashed on the façade prepares the guest for the same feeling on the interior. Suddenly shielded from the noise of the street, the lobby is a sensory experience of calming wooden curves and low lights (as seen in Photo 2). Also on the ground floor is the hotel’s award-winning restaurant, whose most distinctive characteristic is a transparent bodega, and the Marmo Bar with an outdoor terrace.

Guests can choose the architect’s work that most appeal to them in one of the hotel’s 282 rooms, 21 junior suites and 12 suites spread out among 12 floors. The suites, also designed by Nouvel, are equipped with sliding panels to give the guest the freedom to arrange the space that best fits the desired experience.

Although most of the architects are experienced and renowned, the fourth floor, designed by the London-based Plasma Studio, was awarded as the first prize in a contest for new, upcoming artists and proves to be the most avant-garde. The hallway uses large pieces of stainless steel arranged geometrically giving a futuristic, spaceship ambiance (as seen in Photo 3).

The other, more experienced architects come together from every corner of the world such as Spain, Japan, France and Australia. The American Richard Gluckman was commissioned to design the ninth floor, a geometric space with one wall made of translucent glass that gives the room a peculiar glow (as seen in Photo 4).

Already in a relatively high part of Madrid, a city that is enclosed in the north by a large snow-capped mountain range, the Hotel Puerta América offers spectacular views from most of the windows, especially the 12th floor suites. Somewhat hidden, but not to be missed, visitors can walk on a crystal floor in the periphery of the elevator and see down along the whole vivid façade to the ground.