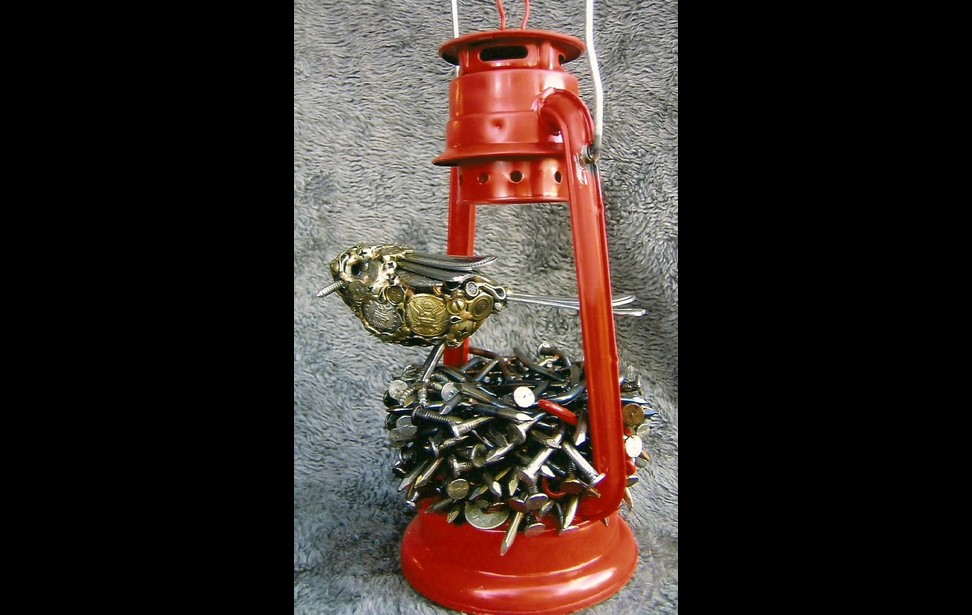 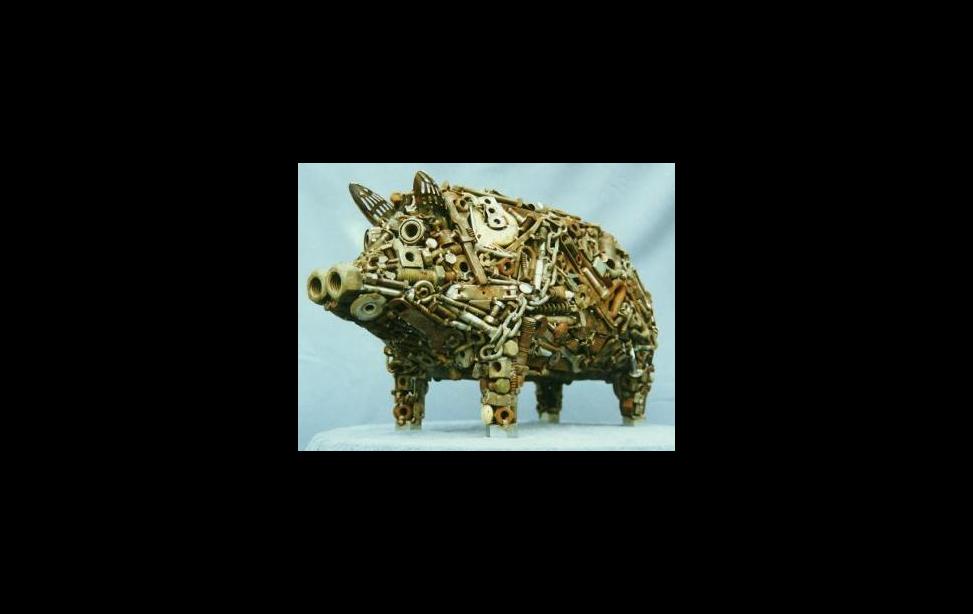 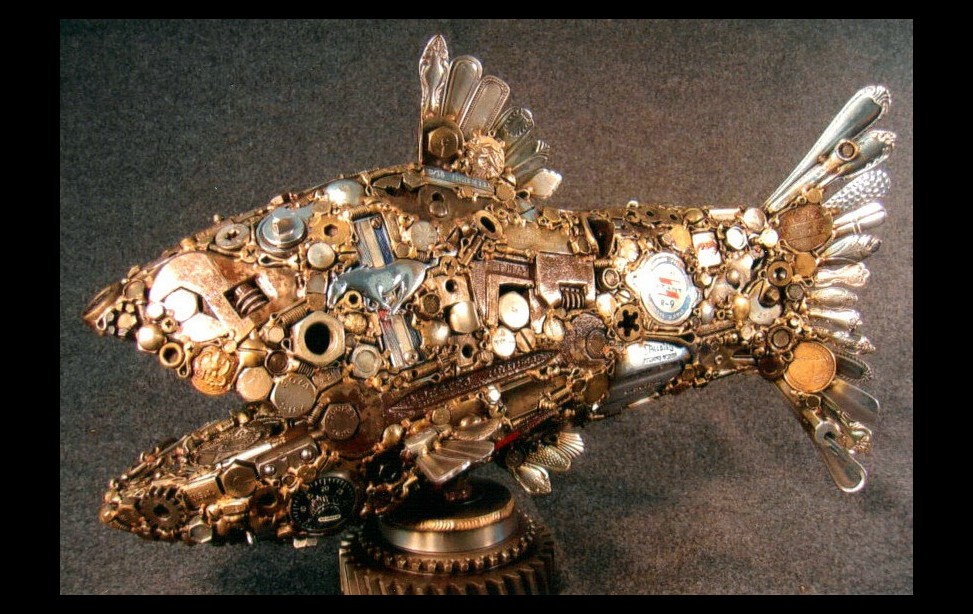 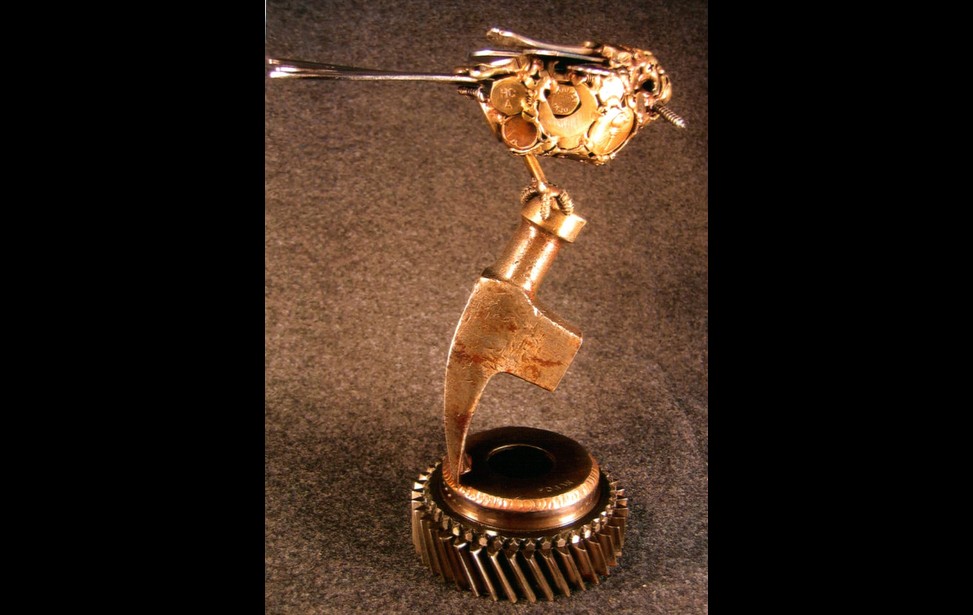 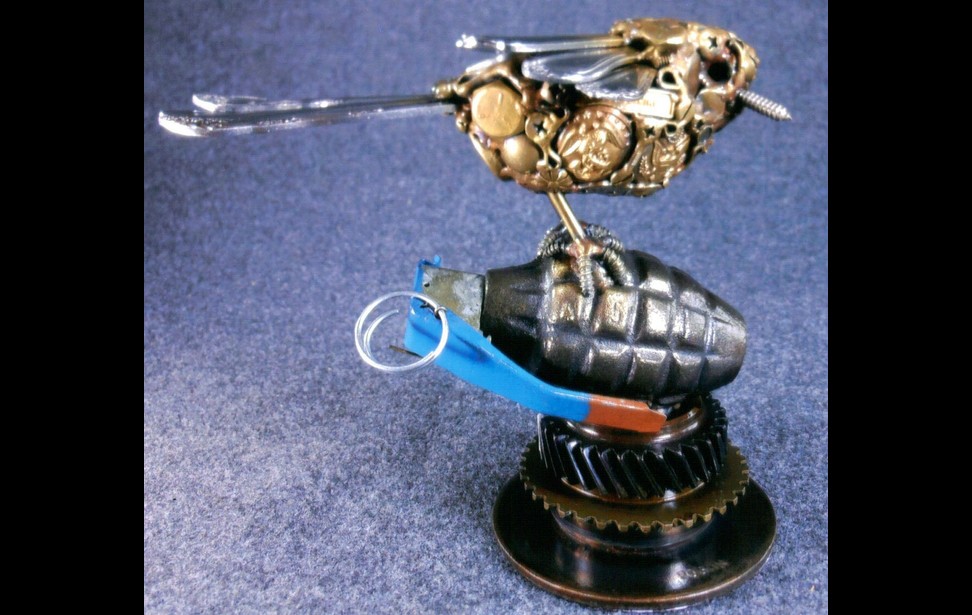 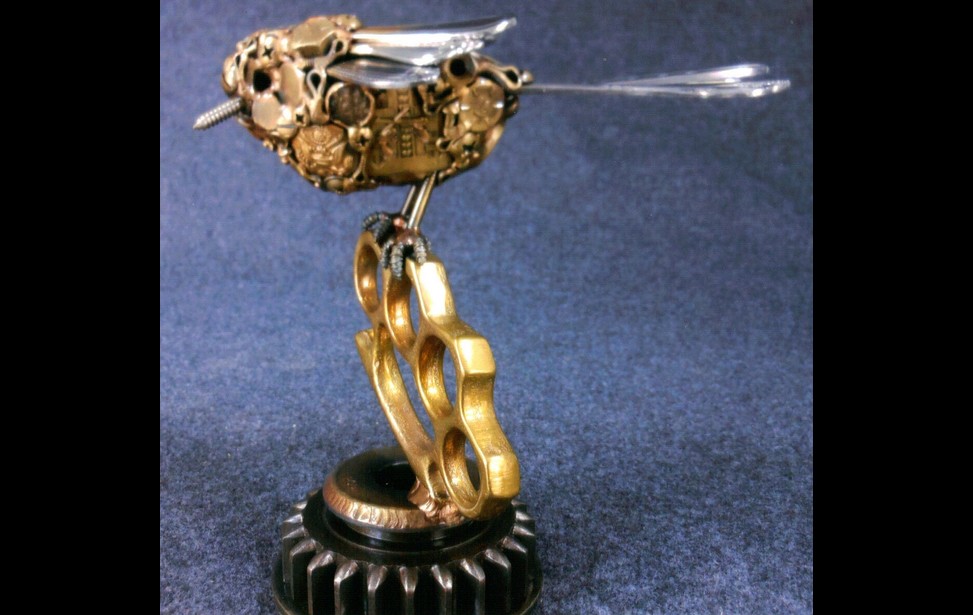 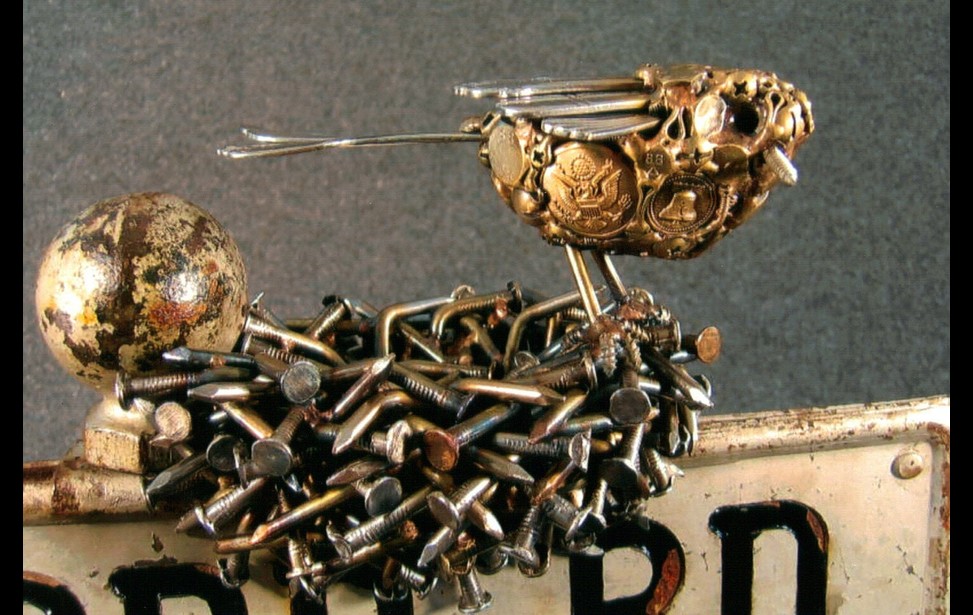 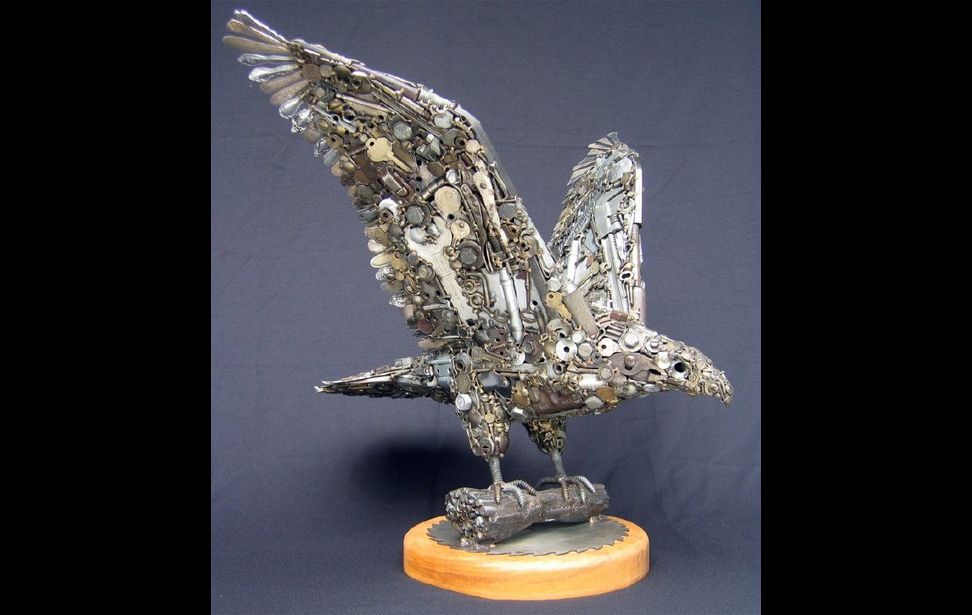 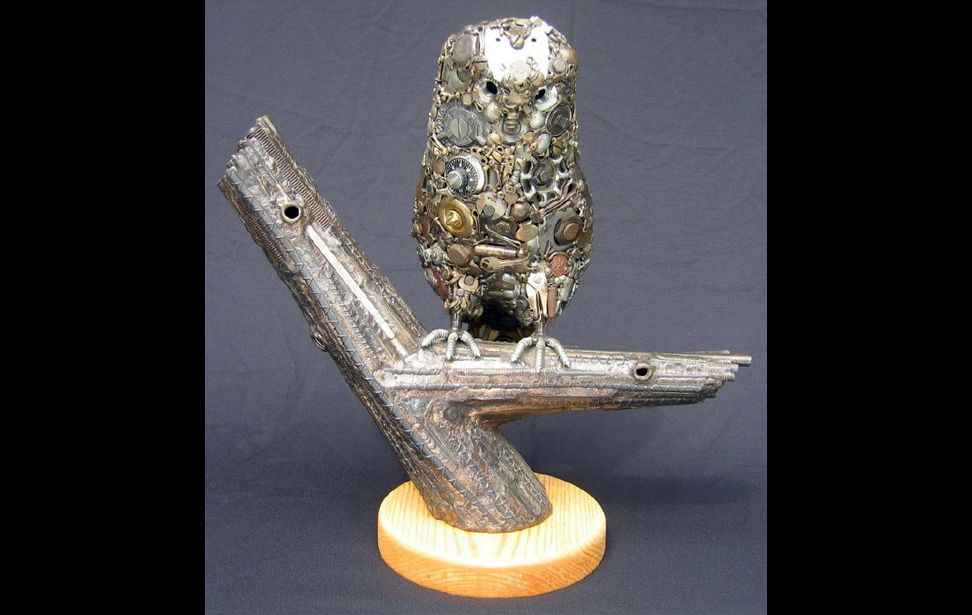 ALOHA, OR -- Joe Pogan was a welder for over 20 years before he decided to use that skill to make art. His realistic wildlife sculptures are made entirely of found metal objects — an interesting and sometimes jarring juxtaposition of nature as the subject matter, and industrial objects as the medium.

If I asked you to picture a cute little bird, you probably wouldn’t imagine it settling down on a nest of nails or perching on top of a grenade (as seen in Photo 1). But that’s how sculptor Joe Pogan depicts them, and that’s how his customers like them.

Pogan was a welder for over 20 years before a fateful day in 1995 when, at almost 50, his life took a different turn. “I bought a TIG (tungsten inert gas) welder for my shop and had to come up with a good reason on why I bought it,” he explains.

That reason soon stared him in the face from a box of junk at a farm auction. “I saw a couple of nuts that looked like eyes in one of the boxes so I bought them, took them home and tried to make a big pig.” (as seen in Photo 2)

The thought to make sculptures with his new welder had crossed his mind a few times, but until he saw those eyes, he didn’t know what kind of art he’d like to make. And truth be told, he didn’t really consider himself an artist. “I have a twin brother who draws pictures with both pencil and pen/ink, made prints and sold them at art festivals. I always considered him the ‘artist’ of the family,” says Joe, who also draws and paints, but just for fun.

Luckily, based on that first pig and a few follow-up pieces, Joe’s brother Jerry suggested he try to get in to Oregon’s Salem Art Festival to sell his work. “I applied, got in and made some little pigs (size of a piggy bank) and they sold. That's when I decided to become an artist,” Joe reveals.

His years of working with metal were a big plus, and while it might seem odd to use obviously manmade pieces to create such beautiful nature-inspired works, Pogan has never tackled any other subject matter. People like what he makes, and until they stop selling, he doesn’t see a reason to change.

Besides that, it seems pretty fitting that recycled junk, with its environmentally friendly appeal, is being used to represent creatures of the earth.

Every sculpture is unique, but based on the same patterns. He gets the hardware wherever he can find it — at garage sales, auctions, second hand stores, thrift stores and junk yards. “First I weld a frame and then attach bigger objects to the frame and work my way down to the smaller objects till it looks solid,” he explains. If he really tries, he can make a bird in a day, and a fish in a couple of weeks (as seen in Photo 3).

His goal is to create an eye-catching metal amalgamation (as seen in Photo 4), with enough odd objects, nooks and crannies that you could explore it for hours. “I do like the idea that each object I put on a sculpture has a past (someone’s hammer, etc.) that has a story of its own, and now it’s being looked at in a different way,” Joe says.

But he wants people to see the subject matter, not just the medium. And while it may seem like he’s making a social or political statement by having a bird perch on a grenade (as seen in Photos 5 & 6), that’s not the intent. “My only message is I hope people enjoy looking at my sculptures. As far as the grenades, brass knuckle, etc., people ask if I’d put a bird on those objects, so I did. I thought they were pretty neat, so I keep making them.”

What’s really fascinating is how all those odd metal pieces end up building a creature that looks like it could fly, walk or swim away at any moment. When I told Joe that, he replied, “I do try to make them look alive, so if I pull it off, I’m happy.”

How difficult is it to do that? “I'm having fun, so it’s easy to do what I'm doing; so if they look like a living creature, I'd have to say, (it’s) easy,” he answers. Pogan's other artwork featured in Photos 7 - 9.  To view more of Pogan's artwork visit www.joepogan.com.