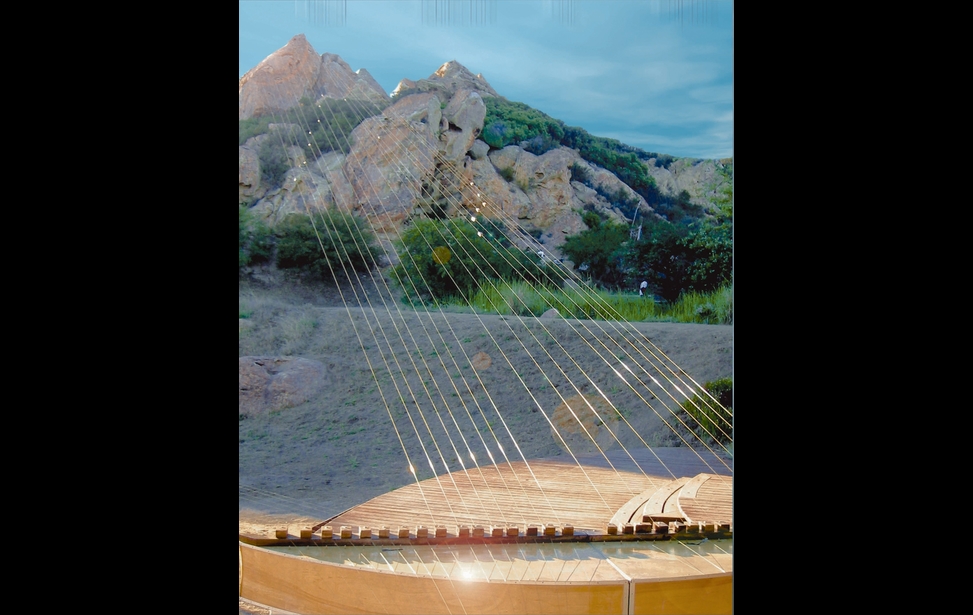 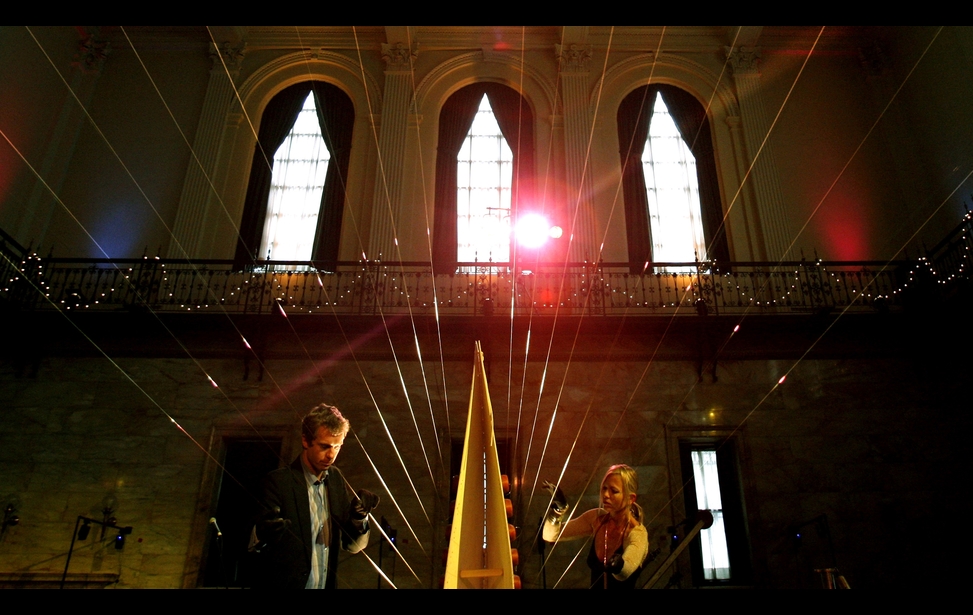 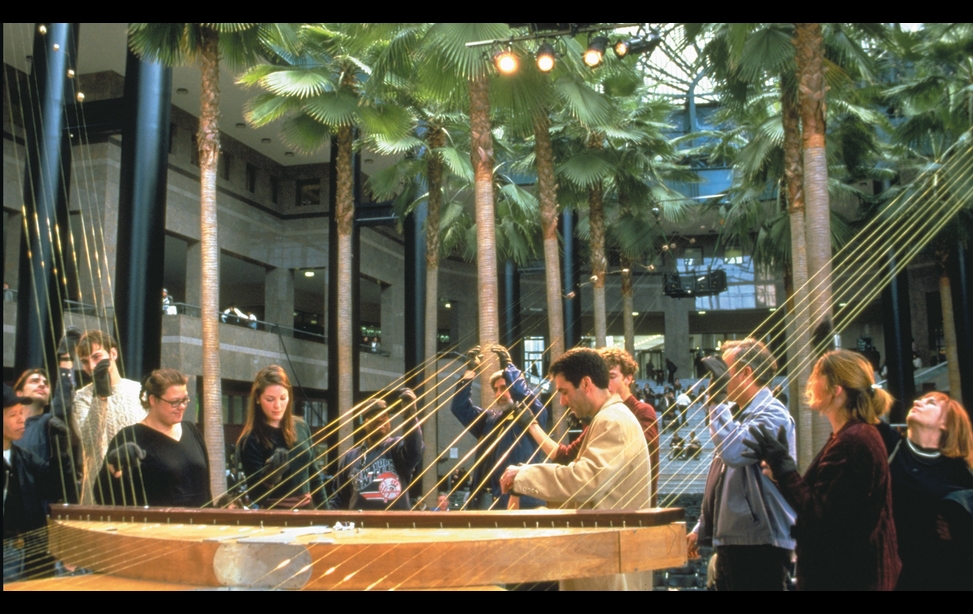 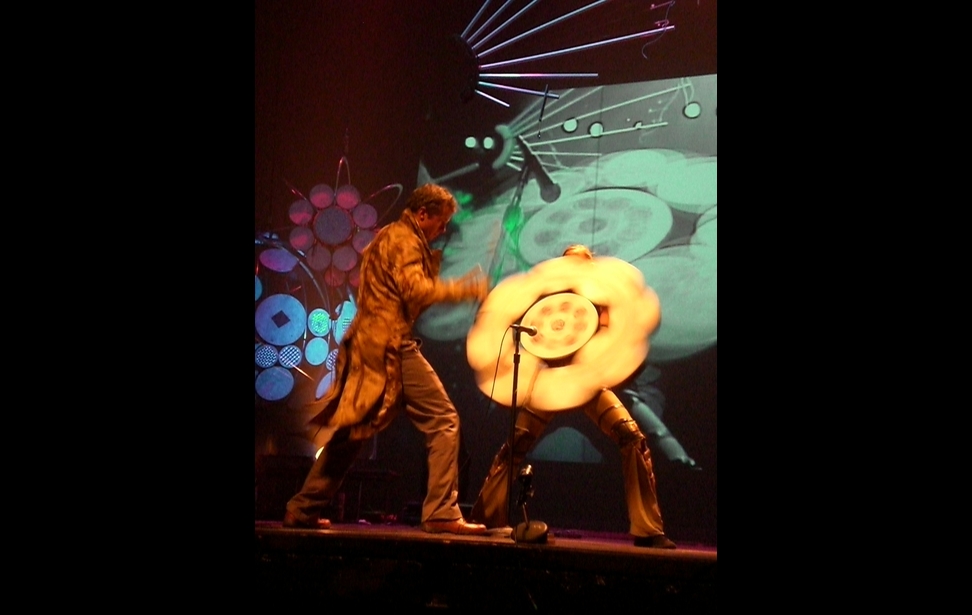 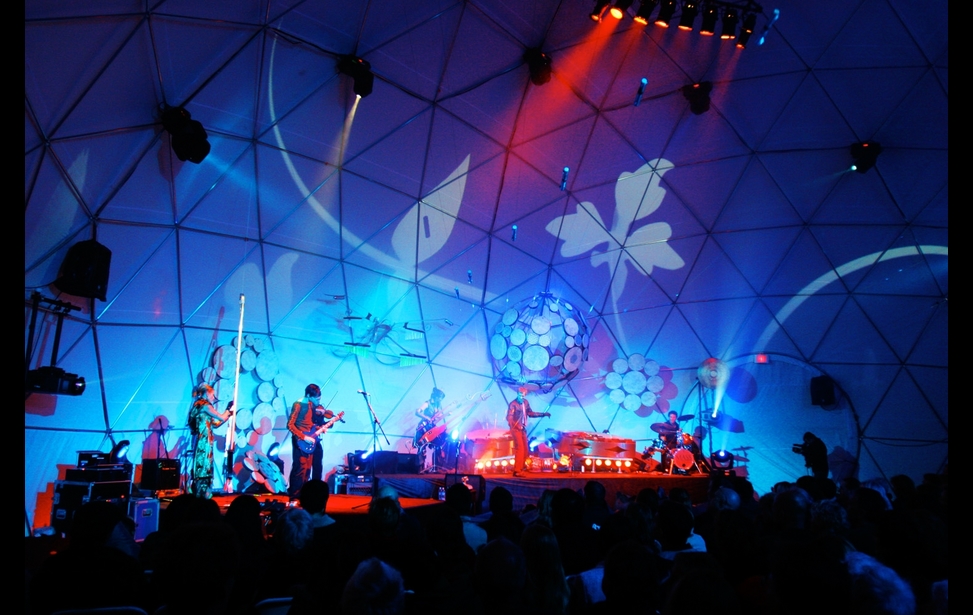 Long strings stretch from the top of buildings to a platform on the ground. A pile of gloves lay in a box next to a tray of rosin. It is an instrument known as an Earth Harp. The platform acts as a bridge, similar to the bridge of a violin.

Invented by Bill Close, Artistic Director of MASS Ensemble, the Earth Harp is a large-scale installation, described as an architectural stringed instrument. It is played by running gloved fingers coated with rosin along the strings, effectively using a person as a bow. Unlike other stringed instruments, the strings are stroked, not plucked or bowed, to create their deep, rich sound.

The Earth Harp received its name when it first ran strings across a valley, literally turning part of the Earth into a giant harp. With strings that have run over 1,000 feet, the Earth Harp holds the record for longest stringed instrument in the world (as seen in  Photo 1).

Earth Harps have been set up in a variety of locations, including the Prudential Building in Boston, the Seattle Space Needle, the Los Angeles Natural History Museum, The Mondavi Center for the Performing Arts, and even a mountain peak in the Santa Monica Mountain Range. For Close, developing instruments is an ongoing project. He has developed over 100 new types of musical instruments as an installation artist and musician, and continues to do so as a driving creative force of MASS.

But Earth Harps aren’t limited to setup outside. They are equally impressive in theatre spaces. In such instances, the ‘bridge’ sits on the stage, and the strings go out over the audience, attaching to the back of a theatre, effectively putting the audience inside the instrument. The result is an all-engulfing musical experience (as seen in Photo 2).

At some events, the public is able to play the Earth Harp (as seen in Photo 3). While it is easy to learn how to play, it is difficult to play well. For an audience member who has tried the Earth Harp themselves, hearing inventor Bill Close or a member of MASS ensemble play it is an amazing experience. The sound is rich and ethereal, entrancing audiences and highlighting the uniqueness of the instrument.

In addition to the Earth Harp, MASS ensemble performances utilize traditional stringed instruments, as well as flutes and other instruments. Performances are more than just musical, and incorporate dance, yoga, and costuming. Sculptural drums, including the multi-surfaced electronic Drum Orb and the Drumbrella add a percussion element to round out the musical experience (as seen in Photo 4).  Elaborate lighting and the use of colored gels are also an integral part of the MASS experience (as seen in Photo 5).

Internationally renowned for their creative combination of several artistic disciplines, MASS ensemle performances are a treat for the eyes as well as the ears, and are sure to constantly unveil new experimental instruments. To locate events in your area and to hear samples of the performances, check out www.massensemble.com.