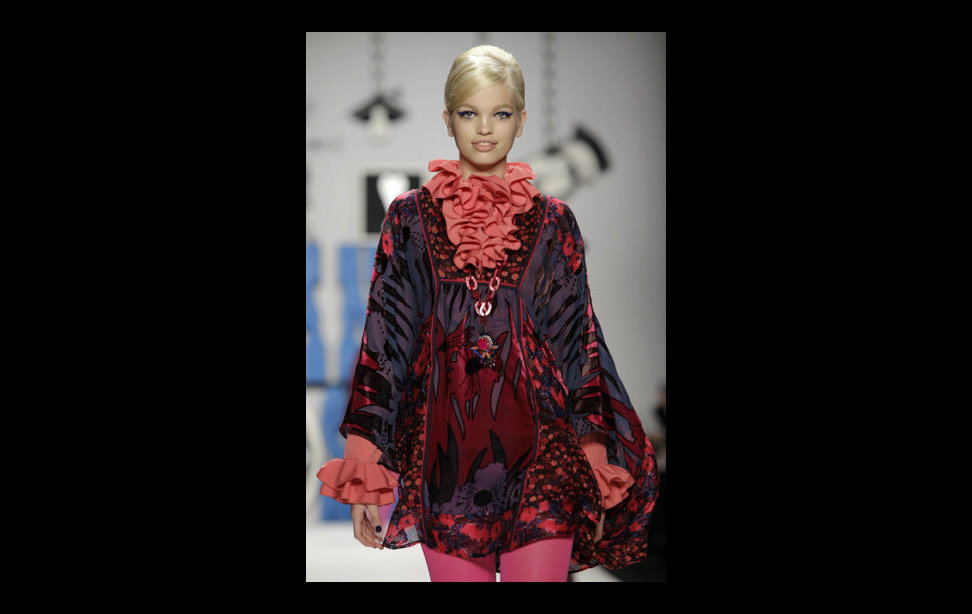 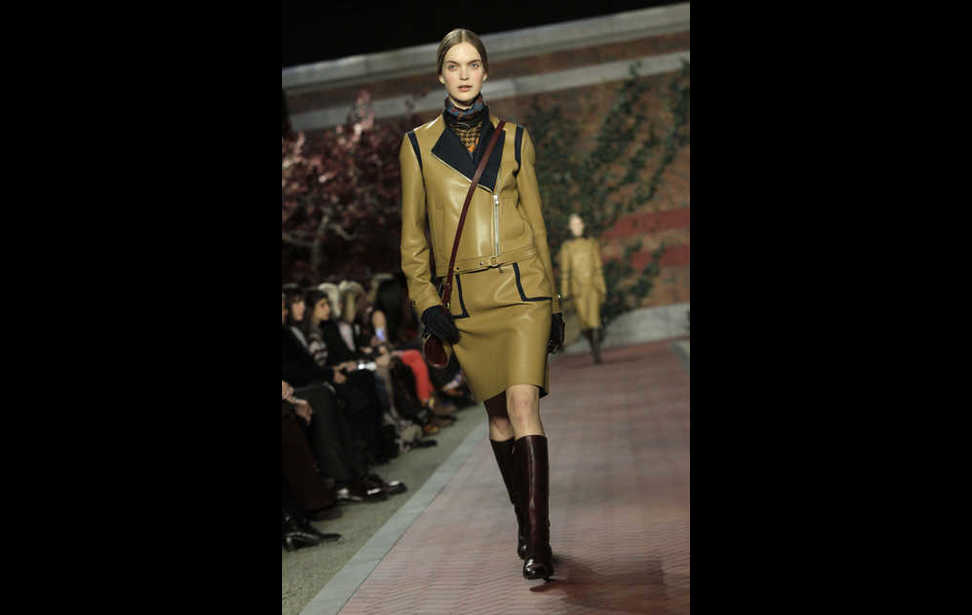 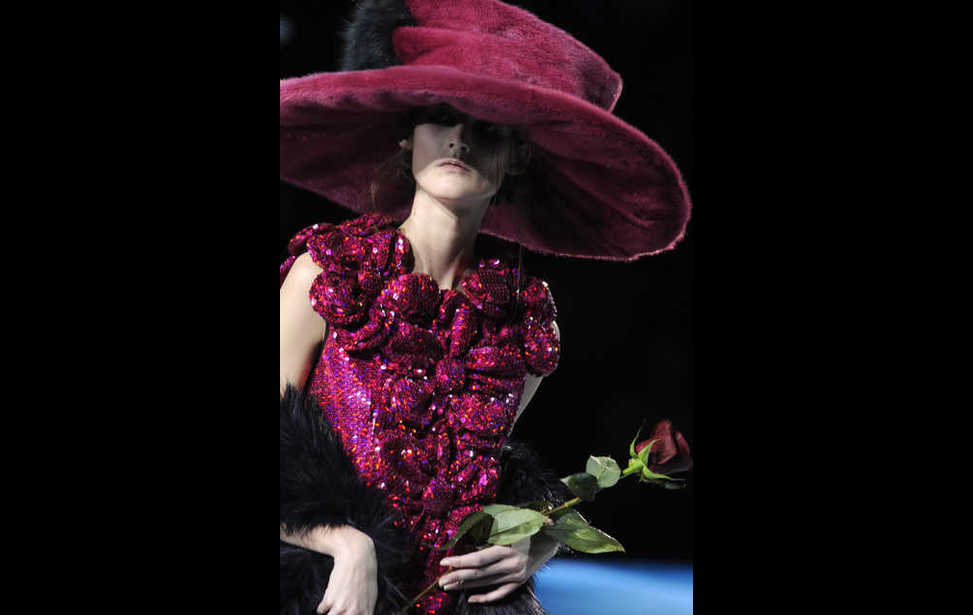 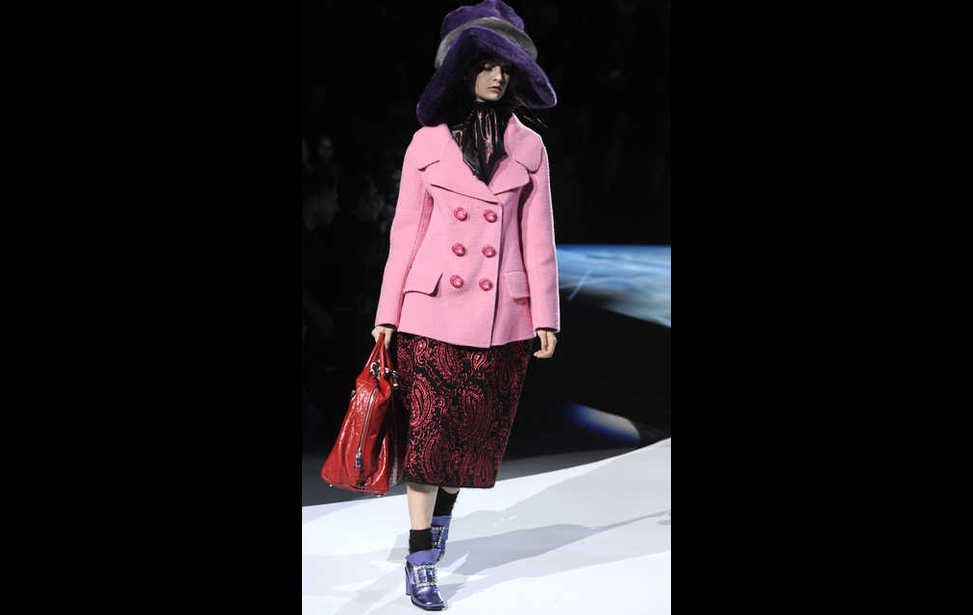 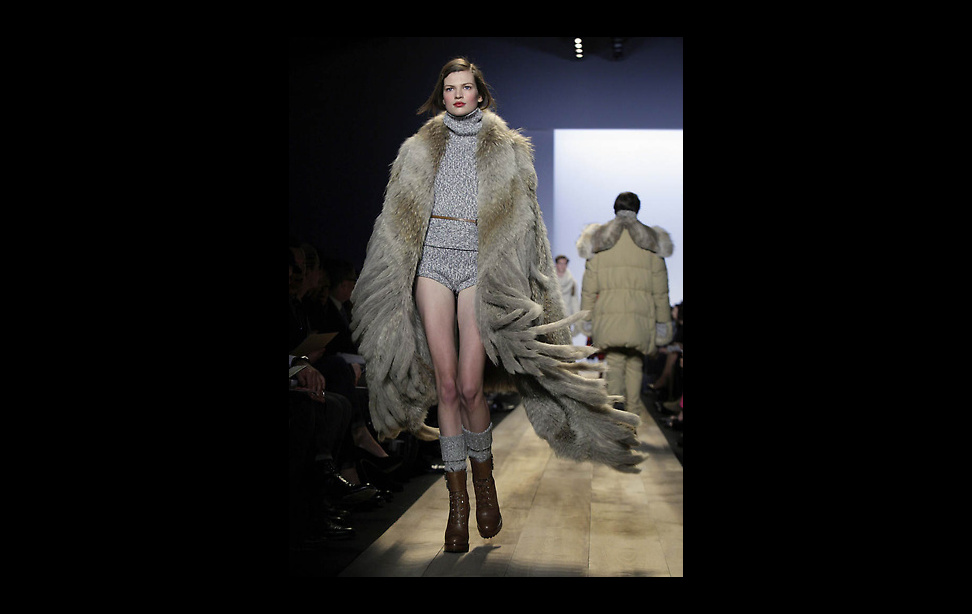 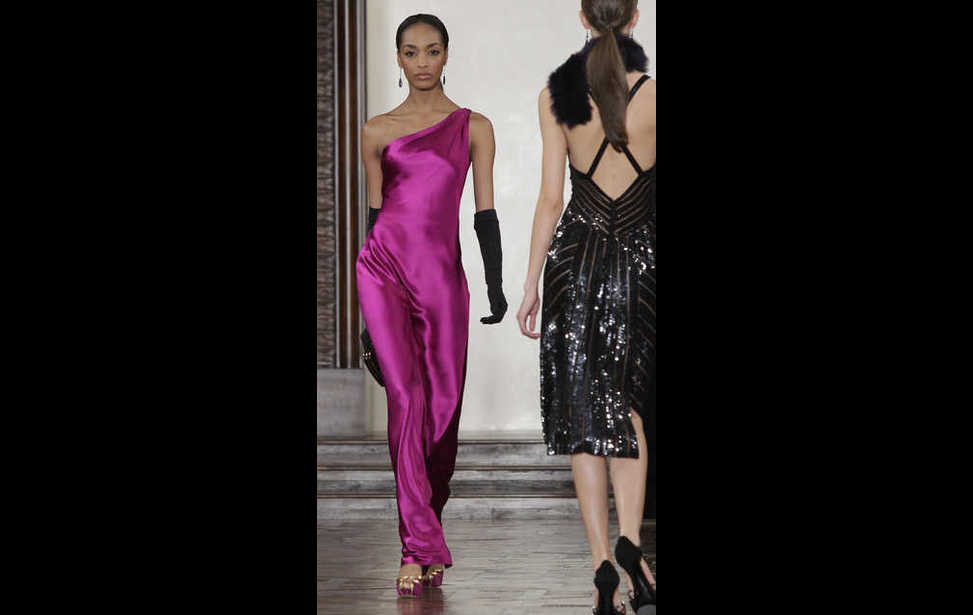 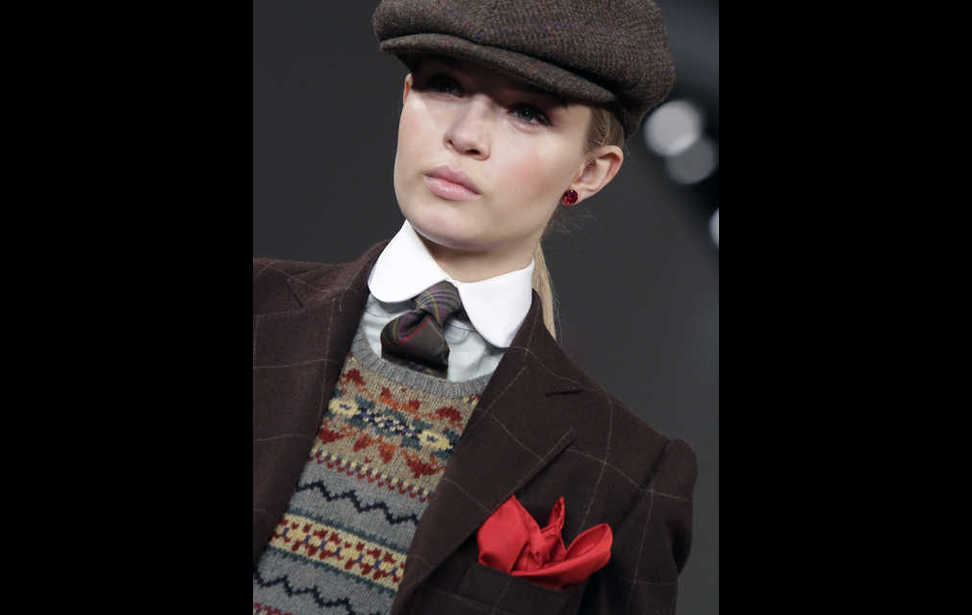 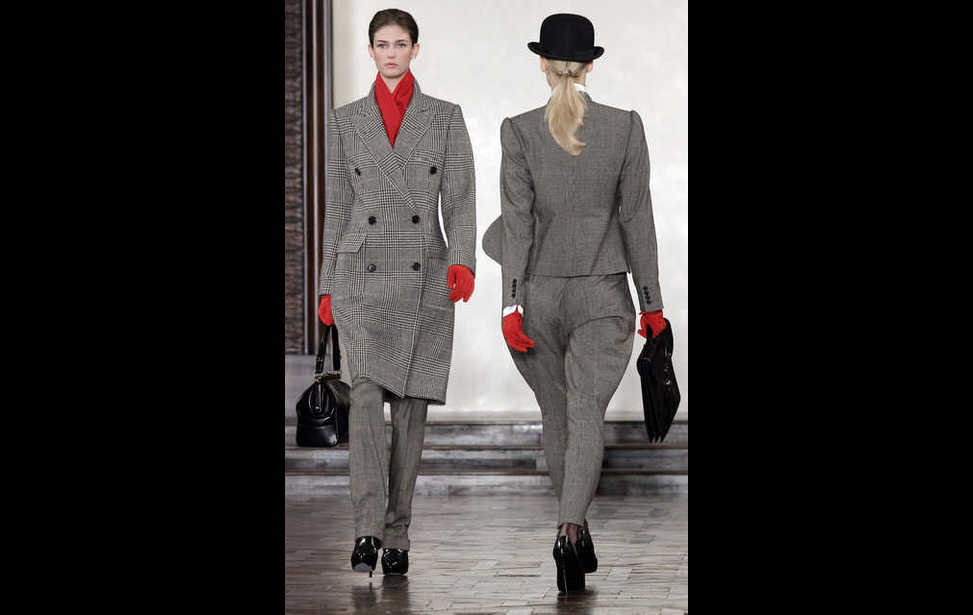 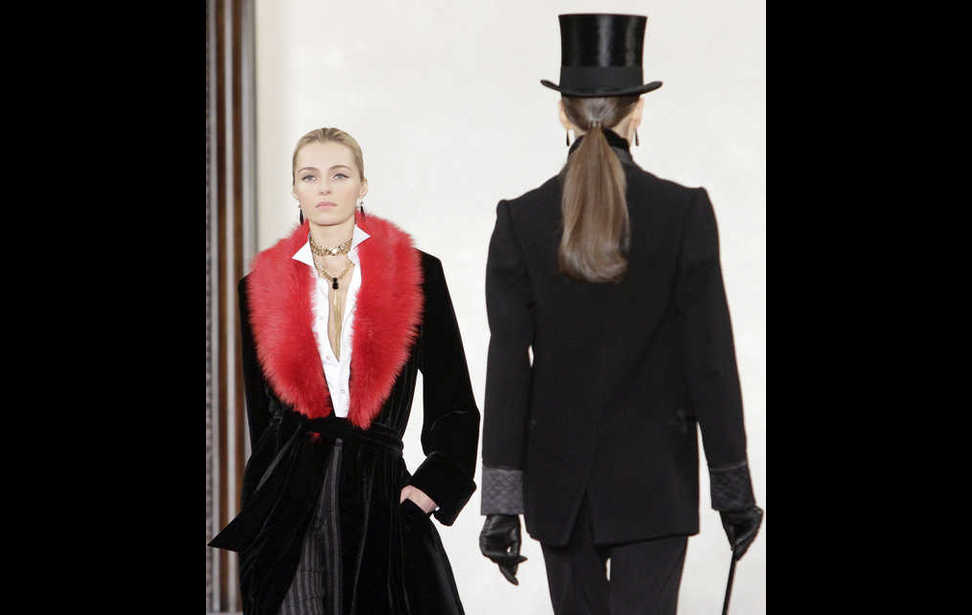 NEW YORK, NY - It may seem like spring outside, but the fashion world is preparing for fall. Kicking off the Fall 2012 global fashion show was the New York fashion week, which took place February 9th through the 16th.  While there are hundreds of talented designers who showcase their collections, some of the most famous American brands presented were Tommy Hilfiger, Nicole Miller, Hervé Léger, L.A.M.B, Marc Jacobs, Betsey Johnson, Michael Kors, Ralph Lauren, and Calvin Klein, showcasing everything from bright prints to muted neutrals (as seen in Photo 1).

Tommy Hilfiger’s collections for both men and women featured tailored looks with a military and menswear feel.  There were muted colors and plaids, hats and peacoats (as seen in Photo 2) Gwen Stefani’s Love Angel Music Baby, or L.A.M.B, collection featured similar styles.  With the exception of the occasional loud-print jumpsuit, most of her pieces were inspired by menswear.  Muted colors like greys, blacks, and some mustard yellow herringbone, houndstooth, and plaids dominated her collection, and her models’ hair looked like it was styled after the late Amy Winehouse’s signature beehive.

Nicole Miller’s collection brought a splash of color to the muted theme of her fellow designers.  Featuring wild prints and a variety of colors, her boho and psychedelic-inspired looks seem straight out of the 60’s or 70’s.  Brown suede, fur, fringe, and blousy tops made their way into her ready-to-wear collection, while oversized hats and velvet or patterned leggings graced most of her models.

Hervé Léger’s ready to wear collection opted for a gladiator-inspired, but feminine, feel.  Again we see mainly blacks and browns, though nearly all of his pieces were form-fitting dresses.  All had some leather as well, vaguely resembling a corset.  His looks were tied together by the continuity of knee-high gladiator boots, and similarly styled ankle boots worn by all of his models.  Like Nicole Miller’s collection, fringe and fur both adorned some of his pieces.

Marc Jacobs’ hats stole the spotlight away from his collection, most being so large that part of the model’s face is obscured (as seen in Photo 3)  They were either fur or velvet, patterned or plain, and in a wide variety of colors.  The collection of clothes themselves was a mixture of themes, including some tailored menswear styles, as well as some paisley and geometric prints, again reminiscent of the 60’s.  The shoes worn by all of the models had a chunky high heel, with one or multiple giant, square, rhinestone buckles on the front, resembling a dressed up version of a pilgrim shoe (as seen in Photo 4).

Betsey Johnson, known for her signature wild style, followed suit on the trends of the aforementioned designers, including both menswear style pieces as well as mod styles.  Starting her show off with knee high black boots, patterned tights, newsboy caps, and round white sunglasses, she showed black and white jackets and sweater dresses, which then morphed into psychedelic styles of the 60’s.  Wild colors, specifically bright oranges and pinks, and abstract prints - Johnson’s signature style - dominated the second half of her collection, and the black knee high boots turned to silver ones. Like many other collections at fashion week, some of her pieces included furs and leathers.

Ending New York fashion week were popular designers Michael Kors, Ralph Lauren, and Calvin Klein.  Kors featured both male and female fashions, with the color scheme of grey, red and black, and brown (as seen in Photo 5).  Fur, sometimes excessively, made its way into nearly every ensemble for male and female, (as seen in Photo 6) and plaids of all sizes covered almost every piece of clothing.  While he ended the show with evening wear, the majority of it proved that sweaters and jackets were the most frequent articles of clothing in his fall collection, with fur, wool, and leather accents being the fabrics of choice.

Of all the collections inspired by menswear this season, Ralph Lauren’s is the most obvious.  While, like Kors, the last few models wore eveningwear (as seen in Photo 7)  the vast majority wore three piece suits and coats in browns, blacks, and greys. Hats were worn as accessories again, not oversized or floppy, but rather structured bowlers, newsboys, and top hats (as seen in Photos 8 and 9).  Once again, velvets, leather accents, and furs made its way into some outfits (as seen in Photo 10).  Towards the end of Lauren’s show, the color scheme shifted from the neutrals to black and gold, with many pieces being accented with shiny gold beads, sequins, and in one dress, feathers.

Calvin Klein wrapped up New York Fall 2012 fashion week with no surprises or novelties.  Sticking to classic silhouettes in mainly blacks with an occasional beige or coral piece, his collection featured dresses in heavy fabrics, either belted or with a jacket over them.  With sleek hair and basic black pumps, the wildest thing about this show was the partially sheer dresses, and again, like many other designers, the use of leather in some of the pieces.

So be sure to raid your mom’s closet for some 60’s or 70’s pieces, as they’ll be back in fashion come fall! If you pair it with your boyfriend’s pea coat and a quirky hat, you’ll be all set for style for fall 2012.