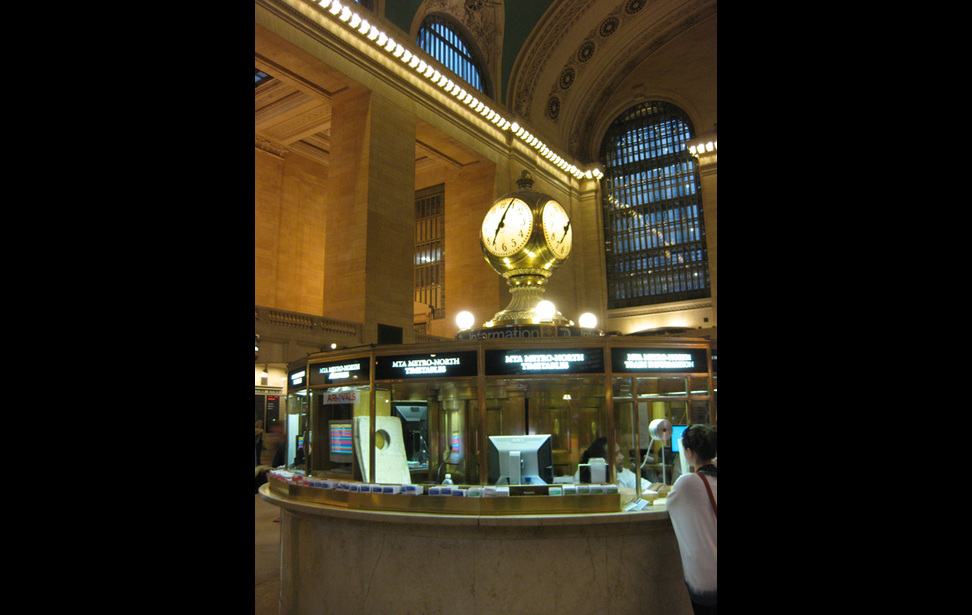 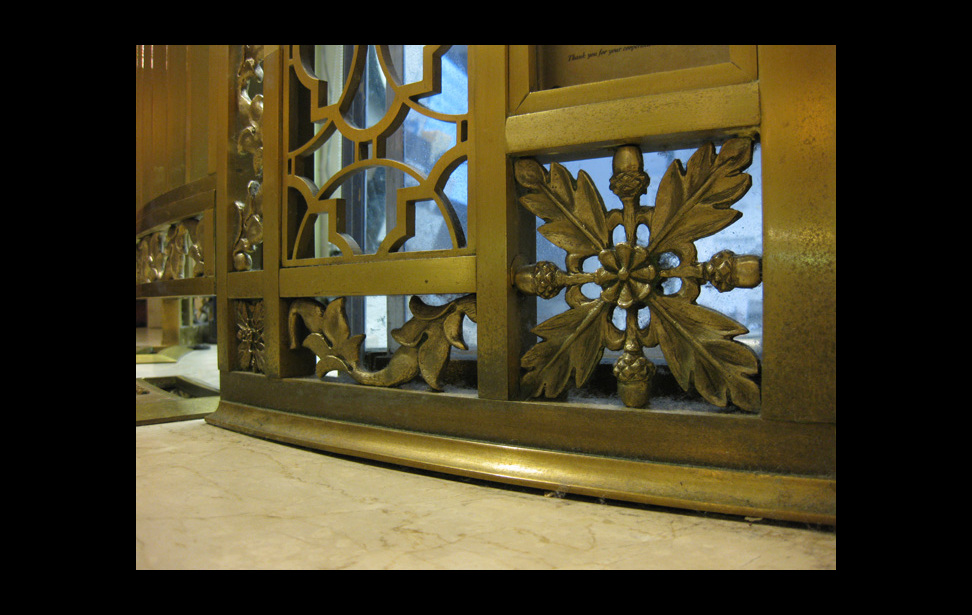 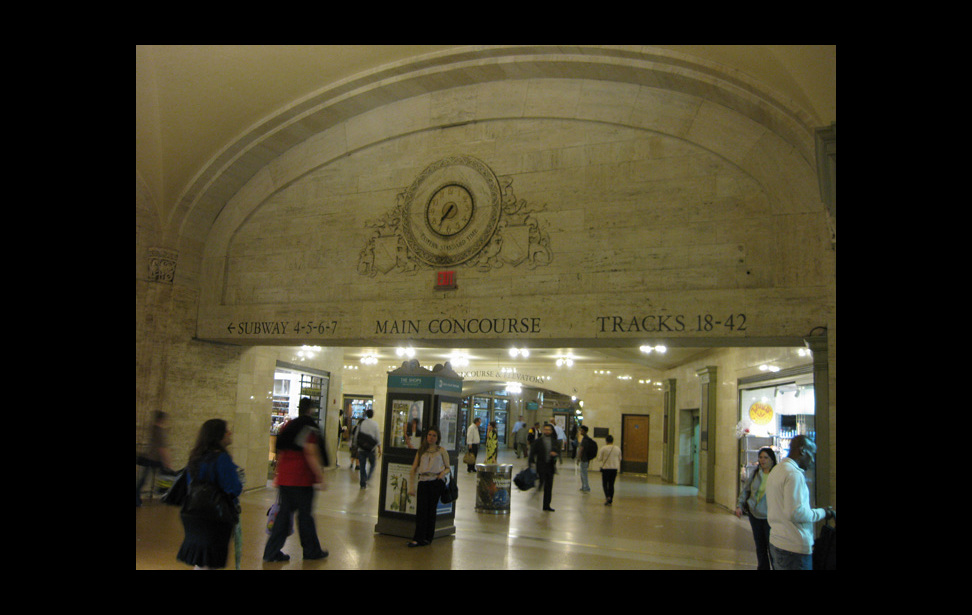 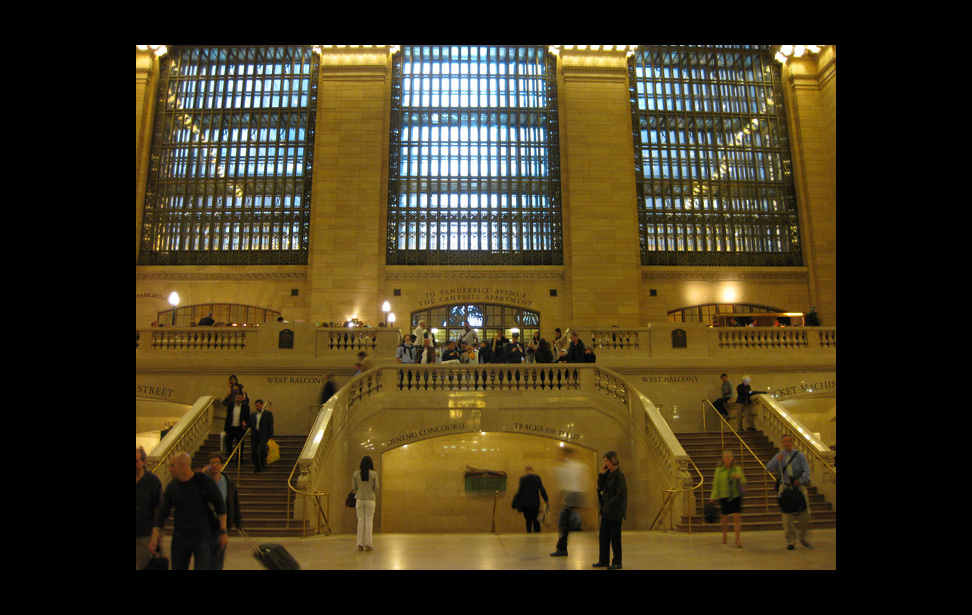 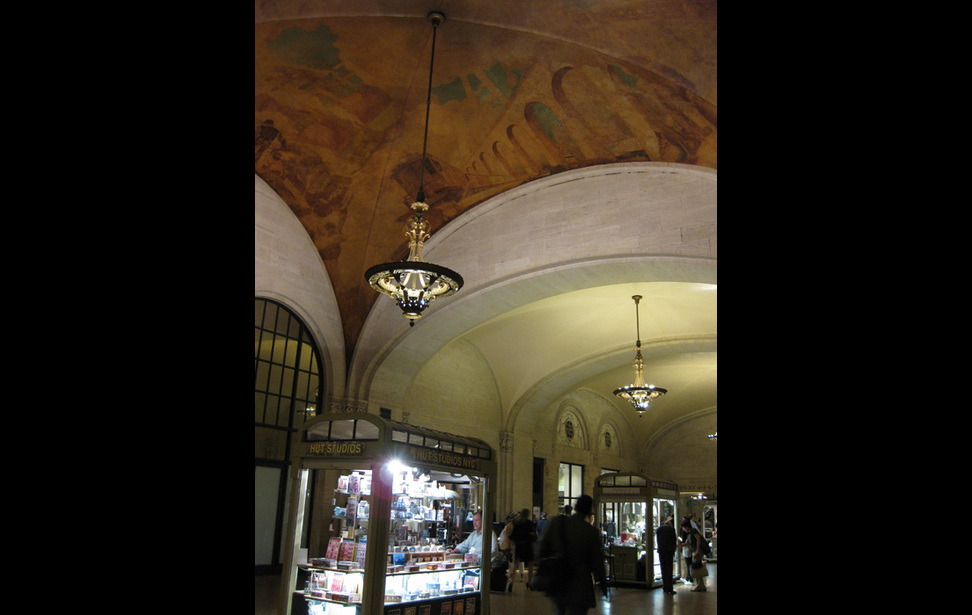 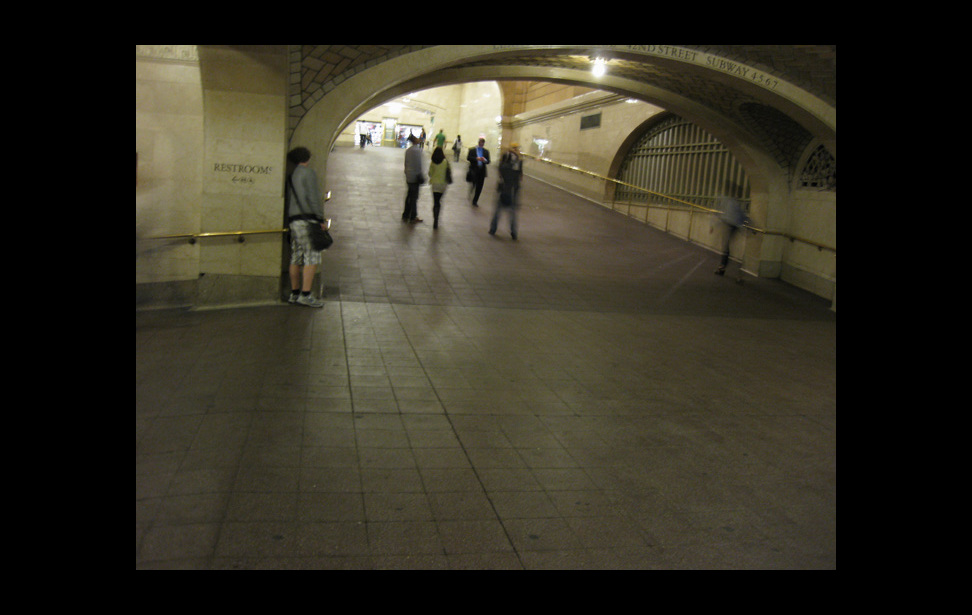 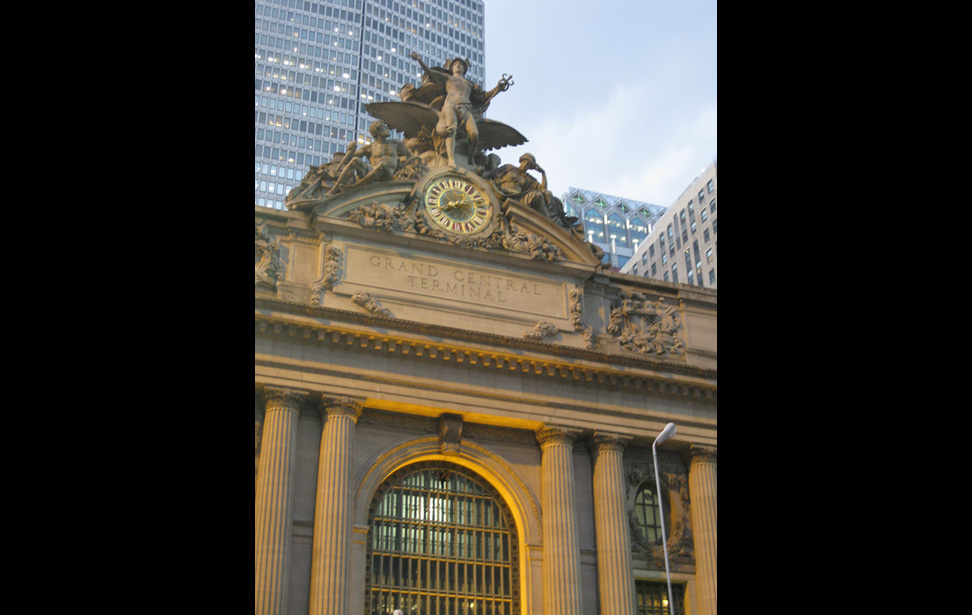 NEW YORK, NY -- In Midtown Manhattan, on 42nd Street between Vanderbilt and Lexington Avenues, is a vast marble microcosm of the city that never sleeps. As the largest terminal in the world, Grand Central Terminal services 700 trains and 700,000 people a day. Designed in the Beaux-Arts tradition, it demonstrates the fullness of modern life: ambition and power, glamour and romance, and utility and speed.

One of the most prominent features of the Terminal is the circular information booth in the center of Main Concourse (as seen in Photo 1). The booth, which is topped by the famous four-faced clock, has an odd feature. Look closely. How do the clerks, who field hundreds of questions a day, get in or out? Where are the doors? In the center of the booth, a large brass cylinder with curved doors leads to a hidden spiral staircase that descends to the lower level (where the food court resides).

Like a star topping a tree, the brass spherical clock—with its four white opal faces—sits above the round booth. The site has been a famous rendezvous point for travelers, families, businessmen, and lovers for almost a century. The acorn on top of the clock is part of the Vanderbilt stamp, which can be found all around the building along with other symbols from the family’s crest (as seen in Photo 2).

A less famous clock (but perhaps more important) is carved into the marble along the Graybar Passage running east off the Main Concourse. The words “Eastern Standard Time” are boldly chiseled beneath the clock (as seen in Photo 3). This clock is actually where standard time began. In order to regulate train schedules and print maps, Grand Central established its own official time to regulate train schedules and print maps, so it instituted its own standard and, in 1918, when Congress passed the Standard Time Act, the rest of the country followed suit.

Also inside the Graybar Passage—named for the Graybar skyscraper to which it gives access—is the Graybar Mural. Painted by Edward Trumbull in 1931, it was titled “Transportation and Construction” to glamorize modern industrial progress, as does his larger, more famous mural “Transport and Human Endeavor” in the Chrysler Building across the street.

Returning to the Main Concourse, although the West Staircase was built in 1913, the matching East Staircase was not built until 1998 (as seen in Photo 4). A metaphorical marriage of European elegance and American grit, it may have been fashioned after the Grand Staircase of the Paris Opera House, but the marble was quarried in good ol’ Tennessee.

Below the Main Concourse (as seen in Photo 5) is the lower-level food court. Just outside the famous Oyster Bar Restaurant is the Whispering Gallery (as seen in Photo 6), renowned its peculiar acoustical effects. Two people, standing in diagonal corners, can hear each other’s faintest whisper. (When I tried the trick out for myself, I clearly heard a woman whisper, “Now, you know one of New York’s best secrets!”)

Flanking the Whispering Gallery are two ramps that elevate behind the Main Concourse. Grand Central was the first train station to use pedestrian ramps. Plucking the idea from the Roman Colosseum, the designer of the station felt that ramps would be faster and create a smoother flow than stairs—setting a precedent for hundreds of airports and train stations nationwide.

Grand Central Terminal is the architectural embodiment of elegance and efficiency, a testimony to the lasting power of great design (as seen in Photo 7). Despite being nearly 100 years old, with every departing and arriving train, it continues to keep New Yorkers up to speed.

All Photos Courtesy Of Rob Reed