For the last ten years, blockbuster comic book films have monopolized our theaters and television screens for fans and casual viewers alike. We are seeing childhood characters decked out in millions of dollars in special effects, casting and production the likes no one would have imagined, and it nearly brings a tear to our eye, (whether out of sentiment or heartbreak, depending on the treatment).

However, what we are seeing on the big screen today are merely the boldest and oldest strokes in an incredibly versatile and ever-expanding cultural painting. When the silver screen is constantly bombarding us with capes, explosions and team-ups it is important to know that underneath that bright and vibrant exterior lies a vastly complex and amazing industry. And, with New York Comic Con having just passed us by (First weekend in October), it only seems fit to put out a crash course for proper comics in the modern age!

While popular culture is currently consuming the classics, it is important to know that comics have been contributing to mainstream media for years. After all, once word got out those comic books “are essentially storyboards”, it was a no-brainer for production companies to try and translate these stories into moving works of art.

Chances are, you have probably seen a film or television series that started out as a comic book. A few key examples:

The Addams Family – The Addams Family is a cultural institution, with movies and television and a Broadway play under its credits. It also began as a comic in the late 1930’s that was originally published in The New Yorker.

Road to Perdition (2002) – This Oscar Winning Film is based on the comic book of the same name put out by Vertigo (DC) Comics in 1998. This film is another primary example that comic books can tackle serious storytelling with equally serious star power (Tom Hanks starred in this adaptation).

Little Orphan Annie (1932, various) – Arguably one of the longest-running properties in both film and comics, Annie started as a comic strip in 1924 and has been transferred to nearly every piece of media in existence. From Comic Strip to Radio to multiples films to musicals, this classic character has been a mainstay in popular culture since popular culture was a thing!

The heavy-handed point about all this is that comics are versatile. Comics are an art form that anyone can contribute to and create and those stories can span everything from personal tales to whimsical epics drenched in metaphor.

Comics are for Everyone!

Just as it says, comics are a diverse, widespread industry of both corporate and independent branches. Stories from the spectrum of human experience and imagination, comics encapsulate creativity as a storytelling mechanic. Here are is a list at a glance of the various comic book companies that are currently operating and the type of content they help produce and distribute.

“The Big Two”
DC Comics – Founded in 1934, DC Comics produces a multitude of titles surrounding such characters like the holy trinity: Batman, Superman and Wonder Woman. These characters have stories that tend to lean towards myth and legend, with characters attempting to navigate humanity through their power. DC Comics is partially owned and operated by Warner Brothers Studios which help produce films and television shows on their properties.

Marvel Comics – Founded in 1939, Marvel Comics produces numerous titles and is host to a myriad of company-created characters by the likes of the great Stan Lee: Spider-Man, Fantastic Four, X-Men and The Avengers. Marvel’s characters are human and typically flawed by nature, making them relatable to their readers. Marvel is partially owned and operated by Disney, which help to produce films, television and other materials based on their properties. 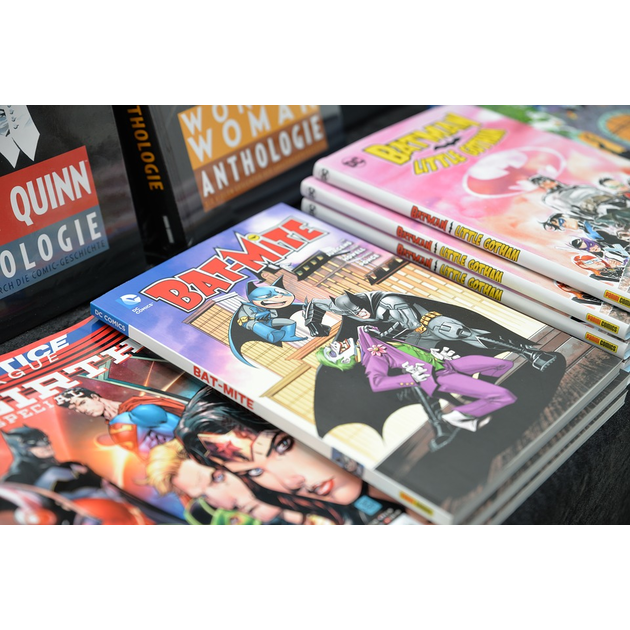 Image Comics – Founded in 1992 by a cadre of the industry’s most popular artists at the time, Image has become a major force for creator-owned comics. Image prints and distributes such noted comics as The Walking Dead, Spawn, Savage Dragon and Saga. The company relies on its creators and has arguably one of the most diverse line-ups of offerings at the moment. Image is a great resource for comic books that are atypical in nature and break the mold of conventional comic book storytelling.

Dark Horse – Founded in 1986 by Mike Richardson, Dark Horse began as a source of alternative comic book stories with a grittier edge like The Mask, Hellboy and Sin City. From there, the company has branched off into producing licensed books for all sorts of properties, from Star Wars to Aliens, Buffy the Vampire Slayer and Conan the Barbarian. Dark Horse boasts a healthy blend of original and licensed content, often times with a slant to the grim and gothic.

Fantagraphics Books – Founded in 1976 by Gary Groth and Mike Catron in Seattle Washington, this publisher focuses on alternative comic books, comic strips, anthologies and magazines and graphic novels. Fantagraphics is responsible for not just one but two notable comic book awards: The Jack Kirby Award and the Harvey Award, both founded and managed by Fantagraphics members.

Northwest Press – Founded in 2010, this Award Winning Press specializes in stories and content produced by and for members of the LGBTQ+ community.

2000AD – Founded in 1977, this British science-fiction oriented comic and magazine produces a number of iconic comics and characters, including Judge Dredd. Comic Book powerhouses like Alan Moore, Grant Morrison and Dave Gibbons have all worked with this publisher at one point.

Black Mask Studios – Founded in 2012 by Matt Pizzolo, Steve Niles and Brett Gurewitz, what once was “Occupy Comics” became BMS, a company specializing in political, transgressive and zeitgeist-driven content.

This is just the tip of the sequential iceberg, with a plethora of other companies producing and distributing content that spans all types of genres and stories. The best part is that most of these companies are all creator-owned and operated, which means the work they are putting out are products of passion. Be sure to check out as many as possible!