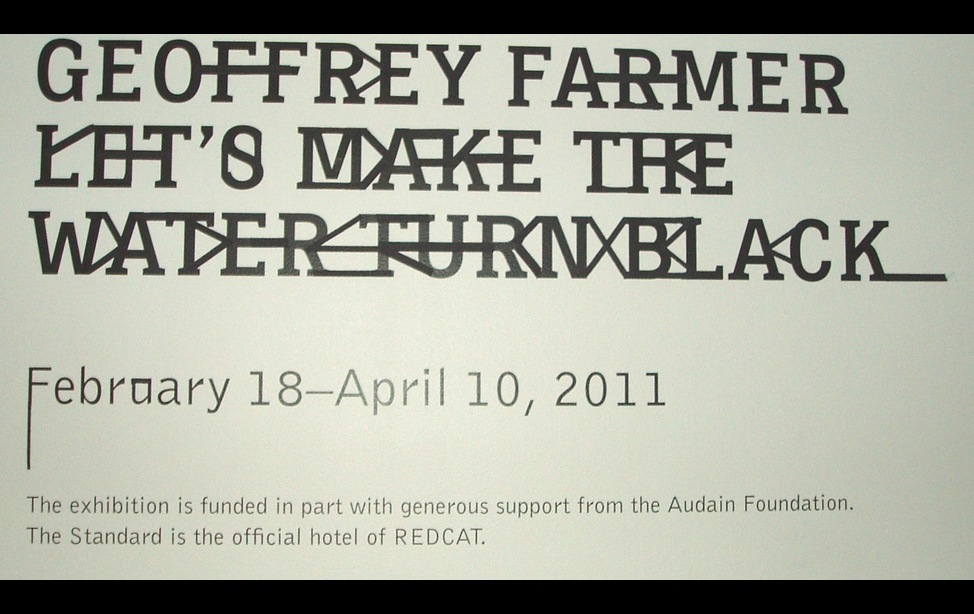 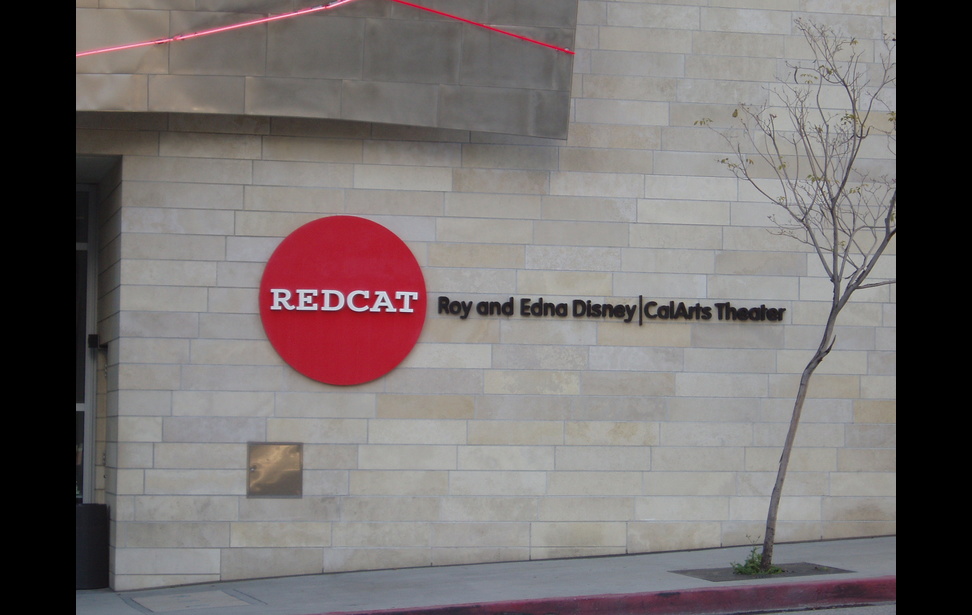 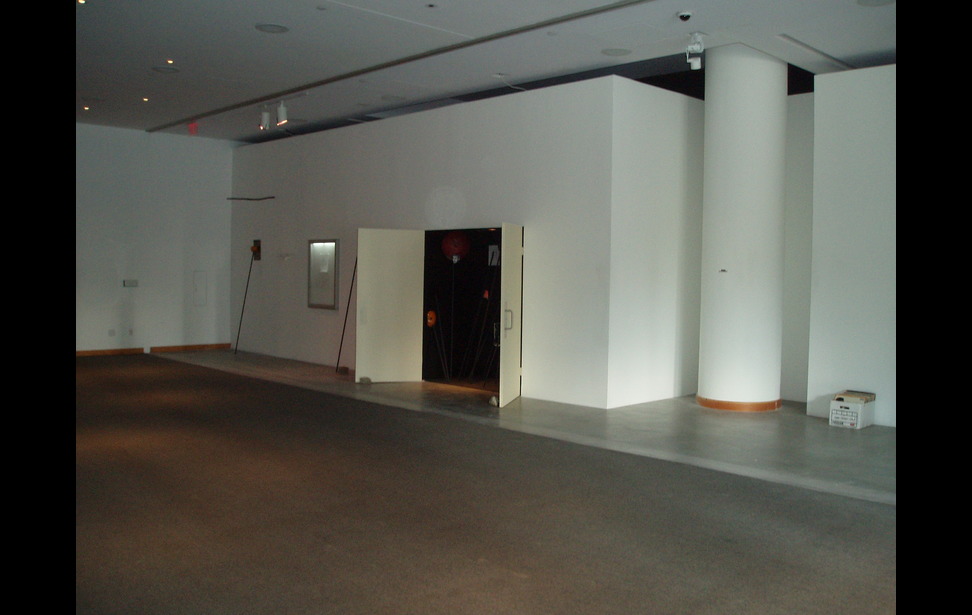 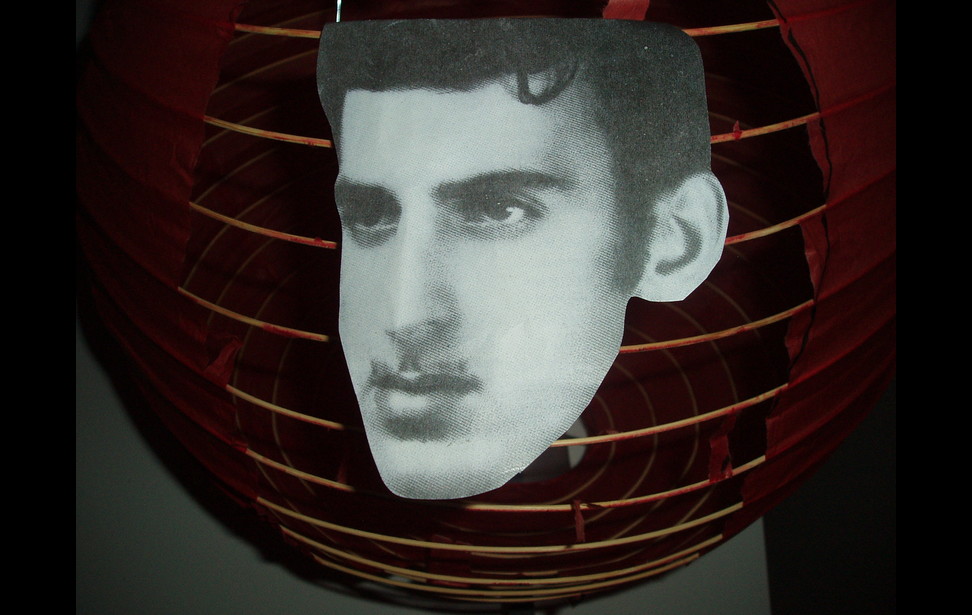 Because Farmer builds his art on-site, what started as just a “façade” in the lobby turned into a full-blown gallery experience. A running diary of that transformation follows.

Geoffrey Farmer paints the doors to the main installation yellow. A recessed, enclosed anteroom is draped in black; it’s barely big enough for the chair placed there. On top of the chair are a bunch of daikon and a zucchini. A display case on the wall contains a set of small, Kabuki-style prints (that look like the historical equivalent of a modern-day headshot).

As he paints, Farmer talks about his current influences, such as the song “Let’s Make the Water Turn Black” by Frank Zappa and the Mothers of Invention (as seen in Photo 3) and an Isamu Noguchi sculpture. “It’s a nice excuse to read,” he says as he delves into a discussion about the roots of Kabuki and its literal translation (“off-kilter”).

“We’re always looking to the past as a way to form our future,” he says. This is an apt explanation of the way his choices in research are applied to his work. In this case, it’s the counter-culture of the 1960s and 1970s, the off-beat evolution of the theatrical form of Kabuki, and the experience of being exposed to various artifacts of Los Angeles’ culture (like the Noguchi rocks in Little Tokyo).

Two words are written in pencil on the door: “waza” and “faza.” He paints over them.

The evolving facade reflects the changing nature of the main exhibit, which, according to Farmer, will include “an assembly of performers and mechanized objects that act out a scripted narrative in the form of a sculptural tableau.”

In its current incarnation, some objects are added briefly and then removed. Others persist a few days or more, creating the kind of motif that might be found in a surreal painting.

At one point, a multitude of sticks prop items up against the wall (as seen in Photo 4). One long post holds up a red, paper, Japanese-style lampshade with a cut-out picture of Frank Zappa; another bears a clip of a painting by Paul Klee. A few others include: semi-nude Japanese figures, a pinecone, a bowler-style hat, and an excerpt from “The Man Who Turned into a Stick.”

The spider plant on top of a post is a semi-persistent object, as it has also been located on the chair and balanced on the top of the door at various points. Items posted in the display case, however, differ by day to include a variety of newspaper clippings—from the recent headline “Rescuers Fight Time” to a full-page Miracle Whip ad.

Farmer adds gaffers tape to the lobby wall opposite the façade, taping over portions of his name and exhibit title, effectively (and somewhat irreverently) altering them.

A poem appears in the display case:
A Rock Can Grow
Eyes, A Curtain Can
Be A Wall, A Stage
Can Be A Piece Of
Paper.

Finally, it’s time to see beyond the façade. Inside, rather than the traditional static paintings lining the walls of a gallery, the “Let’s Make the Water Turn Black” exhibit quite literally takes center stage—on a platform in the middle of the room—complete with theatrical lighting.

Instead of actors, Farmer’s dynamic mixed-media sculptures are the players. The scripts are several running audio pieces, including: spoken word, syncopated drum beats, sounding tones, a poem, and some heavy breathing.

With mood-setting soundtracks and strategically placed spotlights, Farmer skillfully directs the audience’s attention—first to a recreation of part of the Isamu Noguchi statue “To the Issei” (e.g., a rock with Frank Zappa’s likeness affixed to it), and then to a depiction of a Japanese household scene, complete with a tatami mat, slippers, a low-rise table, rice bowl, and a ghost-like figure in a colorful robe.

Farmer’s interpretation of mixed “media” is just that—a multi-sensory experience that combines sound, light, movement, and substance. He does not for one second, though, sacrifice museum-quality color, line, tone, complexity, and meaning.

When asked how Kabuki and Frank Zappa are tied together, Farmer replies thoughtfully and haltingly, mentioning both musical influences and the destabilization of traditional forms. “Maybe they don’t have to be [tied together],” I offer. Farmer gives a noncommittal shrug of agreement. It is REDCAT’s executive director, Mark Murphy, however, who offers a definitive conclusion. “It’s a dirty job,” he points out, “but someone’s got to do it.”