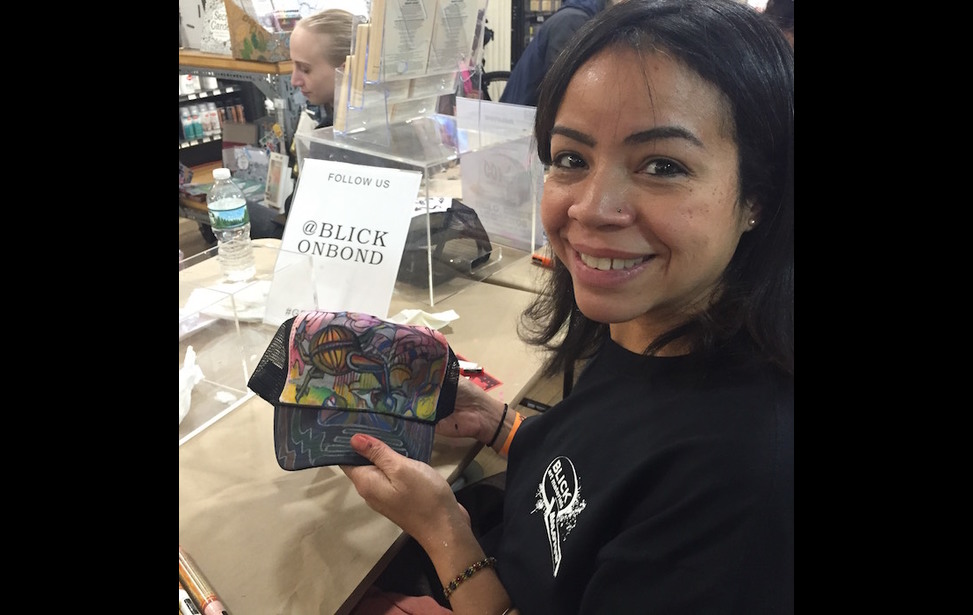 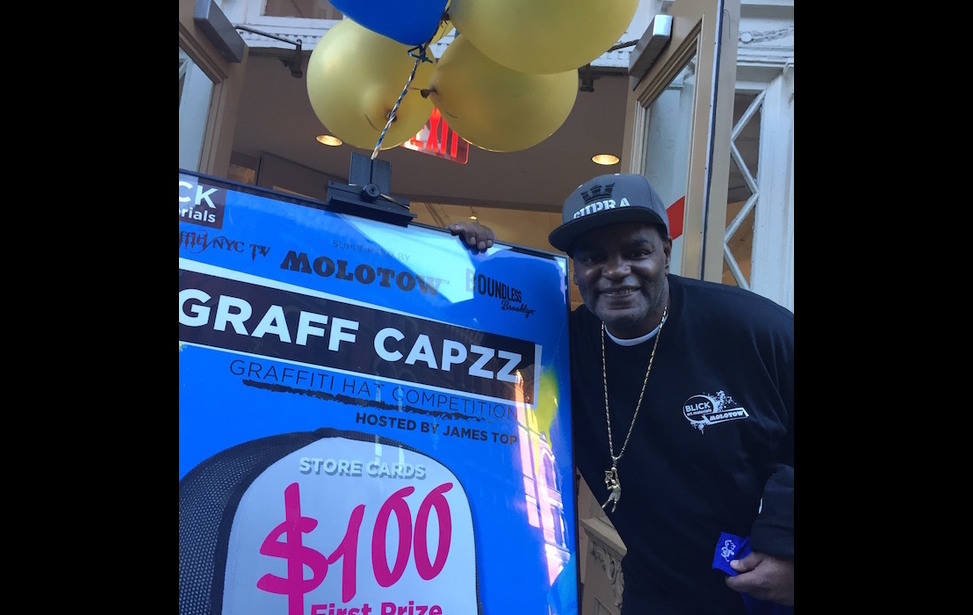 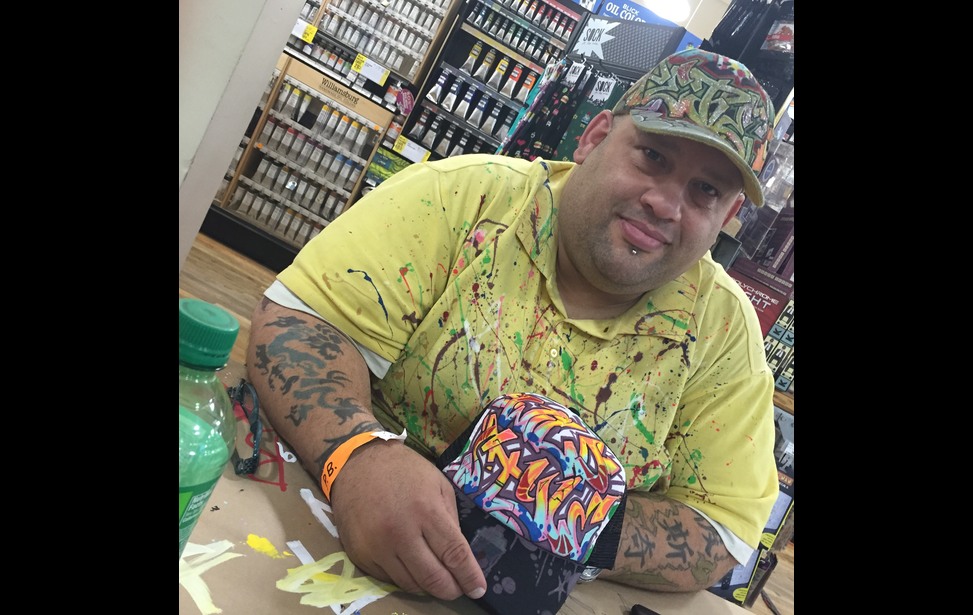 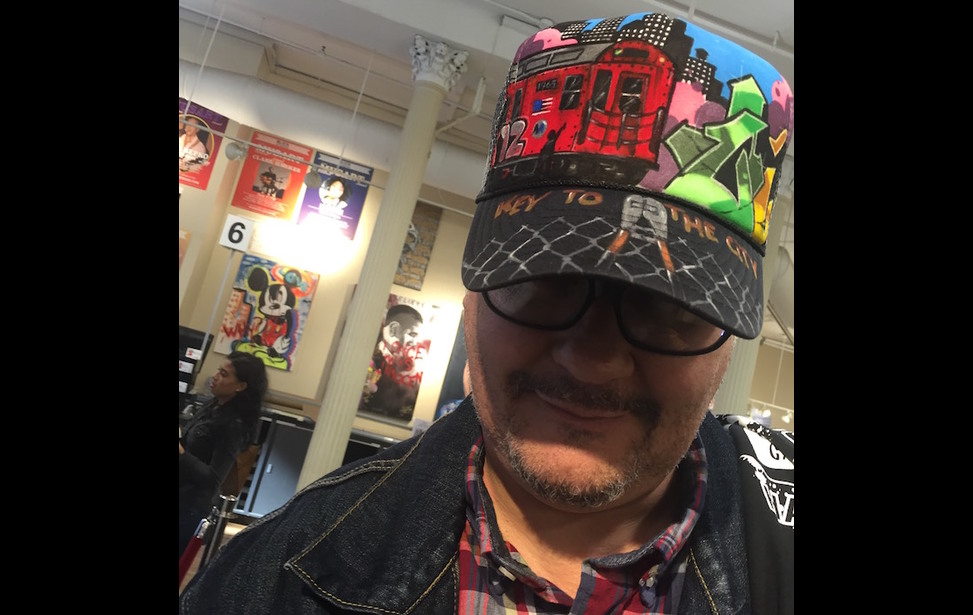 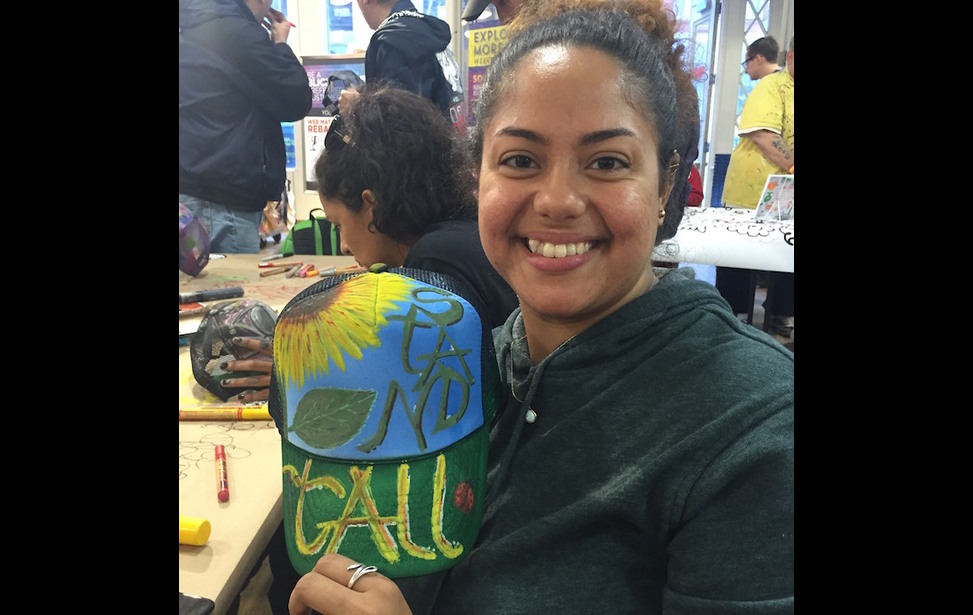 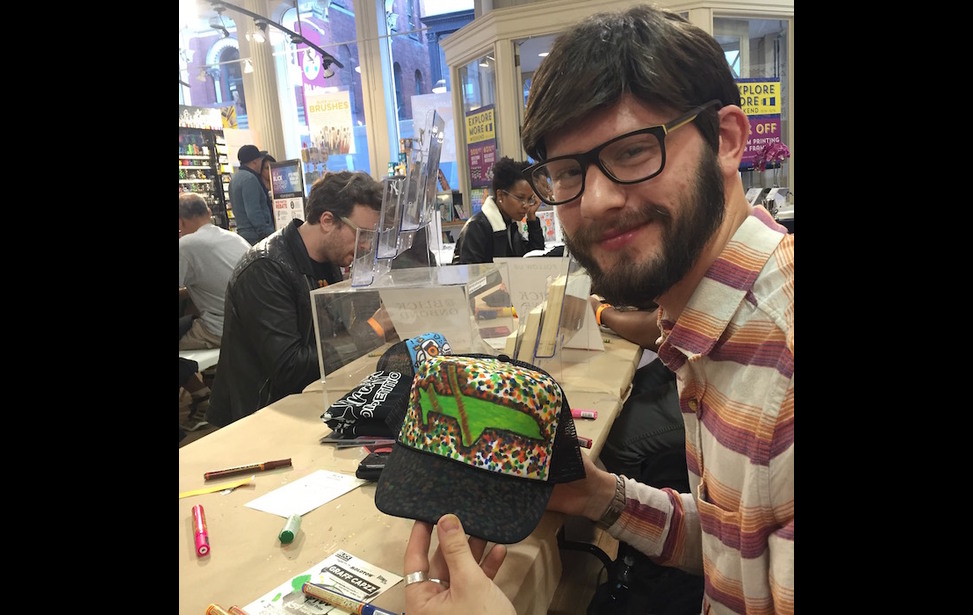 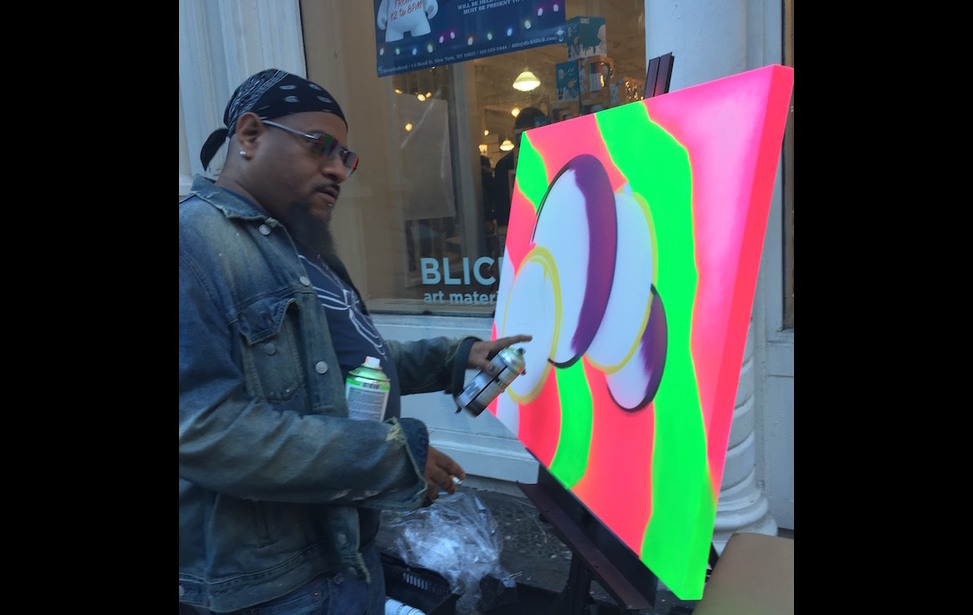 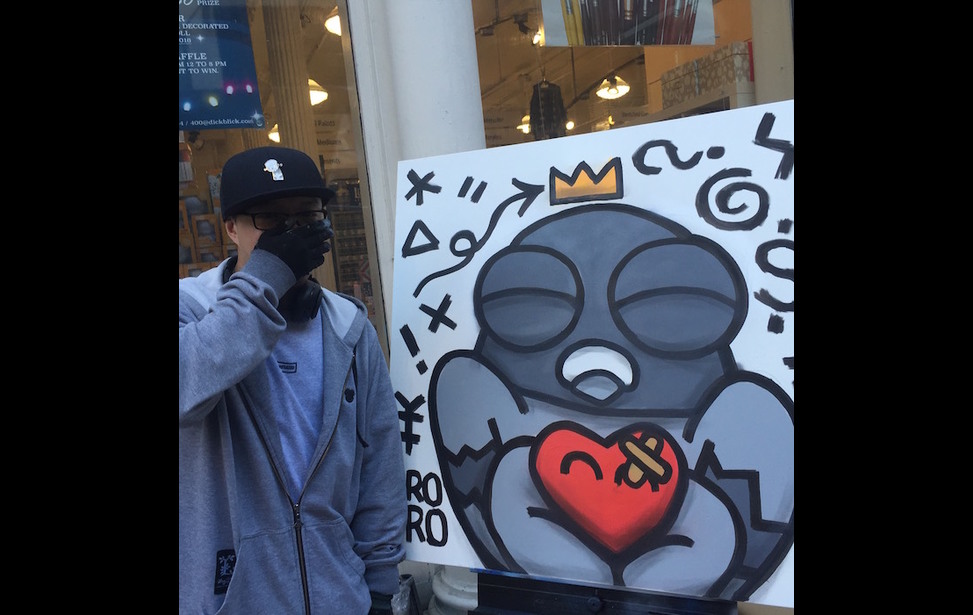 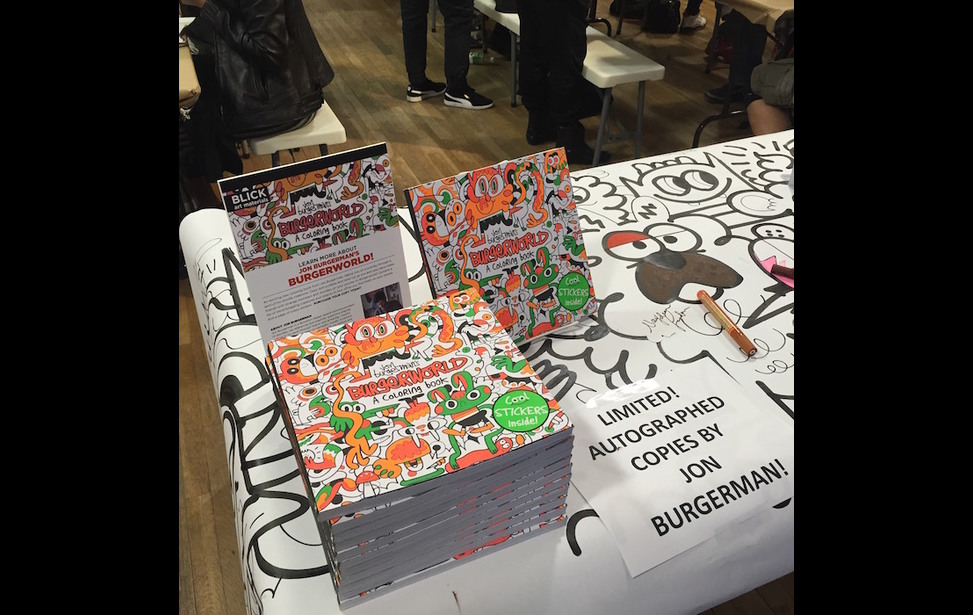 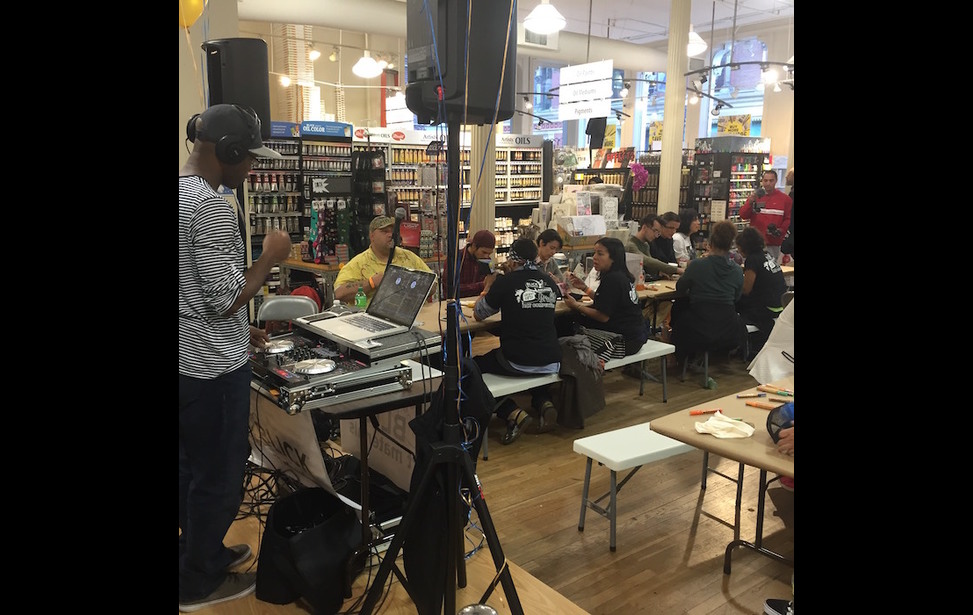 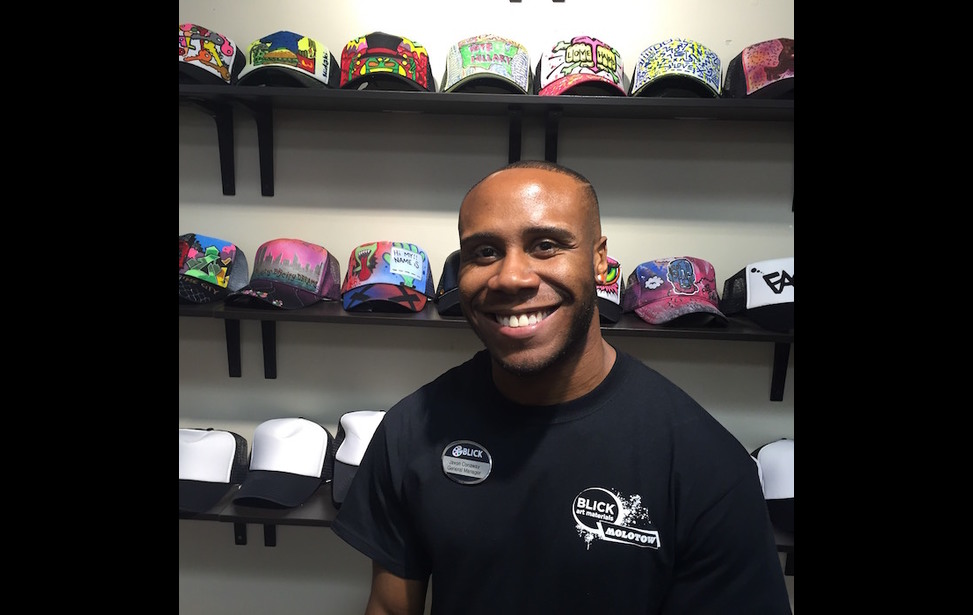 Harlem artist Marivel Mejia was making a painting, but she wasn’t using a brush. Nor were any of the other creatives gathered this past Saturday at Manhattan’s Bond Street branch of Blick Art Materials. That’s because they were vying in the GRAFF CAPZZ graffiti hat competition, where markers and spray paint were the mediums in play for crafting their entries.

Held from noon to 8 pm, the East Village shindig produced a colorway of wearable works that rivaled anything in East Harlem’s Graffiti Hall of Fame. Like Mejia, the talents behind these caps were answering a citywide call to all graffiti artists 18 and up. The earliest 80 got the worm: admission to the joust and a blank cap.

The stakes? A Blick Art Materials store card and sponsored gifts from marker and spray paint maker Molotow valued at $100 for first prize, and at $50 for the two runners up. Champions will be announced on October 29, giving the judges — any Blick customer who swings by the store to vote — nearly two weeks to weigh in. May the All City Best Graffiti Hat designer win.

“Caps are the first thing of fashion that people use to express themselves,” pioneer graf artist James Top told thalo.com. “Instead of walking around with a canvas, they can walk around with a cap.” Besides his hosting duties at GRAFF CAPZZ, the Graffiti NYC cable show anchor and City College instructor also offered guidance to the contending “writers” in attendance.

Among them, remixer and graffer Peteski was busy layering letters in “wildstyle” as thalo made the rounds. The purple contours of those spiky juts and curves radiated down to an image of a spray paint can gracing the cap rim. Asked to annotate his opus, the Chelsea native offered, “The purple spray paint can represents the outline bringing the wildstyle out.” As he noted, the intricate piece (“masterpiece”) lettering referenced iconic works from the South Bronx’s Hunts Point Riverside Park of the 70s and 80s.

The red train motif by fellow entrant Luis “Zimad” Lamboy also harkened back to graffiti’s golden era. Like Peteski, Zimad experienced that cultural moment firsthand. Coming up in the Bronx, he began handstyling as a kid in 1979 and found a way to make a living from his art. “So I knew before I got here today what I wanted to do: Old school Rebird,” Zimad smiled, slipping on his totemic bid. “Back in the 80s they used to call subway cars ‘Redbirds,’ because the authorities painted over the graffiti in red,” he said. It remained to establish why Zimad had the phrase, “Key to the City” emblazoned on the cap’s rim. He ran his fingers over the image of bow cutters against wire mesh and spelled it out: “Bow cutters were used to cut the gates of the train yards.”

Sitting two tables down from Zimad was Esperanza Hincapie, hard at work on the yellow petals of a sunflower set against a cornflower blue sky. The words “Stand Tall” were scrawled in reversals of yellows and greens. Why that injunction? As Hincapie replied, “Without the sun, sunflowers die quickly, but with the sun they stand tall.”

Originally from Colombia, the New York transplant is currently pursuing a Masters in Art and Design Education at Pratt. Earlier in the day she had come to Blick seeking glue for a project, and decided to stay for the challenge. Her delight in the community event was evident, though less so in the exertions required of coloring highly absorbent fabric with markers. “It’s difficult because the cloth soaks everything up,” she explained, noting that oil painting is more her speed. “Markers feel so different. I feel less in control,” she said.

A mere table away, Simon Rubenstein was in marker heaven. “These markers are really versatile,” said the NYU film student as he massaged the nib of a Molotow One4All Acrylic Premium Paint marker into the dome of his cap. That nib carried a citrusy green that Rubenstein had blended from pressing yellow and green markers onto a GRAFF CAPZZ postcard doubling as a palette. “I didn’t think they were going to blend so well,” he confessed. “You can still see the hues, and the pigments are very vivid.”

His Skittles-toned background dots contrasted with the dark theme of his design: a plane sliced by twin verticals slanting ominously downward. As the budding director/cinematographer remarked, “It’s really scary, but it’s reality.”

From its inception, graffiti — like other urban art forms including hip hop and rap — spoke unvarnished truths. Ironically, that expressive tradition was rooted in the blinkered social policies that foreclosed creative outlets in schools. “Art was the first thing cut out of the inner city school curriculum during the early 70s financial crisis,” recalled Top of his Brooklyn coming of age. “With no formal outlet to express ourselves, we found a way with graffiti art, break dance, rap music and hip hop culture.” The former train muralist and co-founding member of the legendary Odd Partners crew continued, “Some people called graffiti art vandalism. I’ve always seen it as a positive art form allowing inner city kids to express themselves and get into art.”

“There are a lot of things we do to beautify our communities,” Top reflected. As a “personal statement and as a fashion statement,” graffiti caps loom large. So naturally Top welcomed the call from Blick General Manager Javon Conaway inviting him to connect the store with the graffiti community. “We’d never had a graffiti cap design competition in New York,” said Top. “I saw it as a great opportunity to use our creative imagination and energy for something productive.” He rounded up fellow artists such as esteemed muralist King Bee and graphic designer Zeroproductivity to present live demos at the event. Lured by a lineup including coloring book author Jon Burgerman and DJ Jacy Campbell, model kit-maker Boundless Brooklyn and Molotow signed on as co-sponsors.

It had all started with four boxes of trucker hats. Flash back to last year, when Conaway began working at Blick on Bond. “I saw these unused hats, and I thought immediately, ‘We can do something with a graffiti theme that’s driven by the graffiti community,’ ” he recounted. “In this location we have a higher end clientele that’s mostly fine artists, so we wanted to expand our customer base and reach out to a kind of customer that we don’t normally get here.” Mission accomplished. According to Conaway, more than 150 newcomers swung by thanks to the design slam, many of whom are street artists.

From a quick survey of buzzy sidewalk easels and indoor tables at GRAFF CAPZZ, it was hard to say where the creativity ended and the commerce began. “Our dream was to let artists express themselves and experience professional-grade products from Molotow,” said Sales Manager Pata Llano, who like most of the Blick staff is herself a practicing artist.

In the dozen years since Illinois-based art supply retailer Dick Blick acquired its groovier rival The Art Store, the site built as a carpet factory has become a go-to emporium for art students and professionals alike. At first there were grumbles over what the switchover would bring, but it didn’t take long for many patrons to feel they’d traded up. The random sampling thalo spoke with cited quality offerings at competitive pricing and the friendly, knowledgeable staff. Today Blick’s Bond Street duplex is packed with inventory without the usual art shop clutter. Art papers and materials for sculpting and framing are stocked downstairs, and most of the paints, brushes and drawing materials can be found on 15’-high columns of the street-level main floor.

Outfitted with high-ceilings, expansive aisles and walls covered in art work, the spot is ideal for networking and getting inspired. There’s even room for a small performance stage. That’s where DJ Campbell hit the decks during the eight-hour bash. With classic sounds from CL Smooth, Big Daddy Kane and other hip hop greats, the Brooklyn spinner, graphic artist and FIT faculty member kept the 80s rhythms coming in the arty boîte.

“Early hip hop tells a story and so does graffiti,” said Campbell.

10) Photo of DJ and graphic artist and teacher Jacy Campbell by Laura Blum.