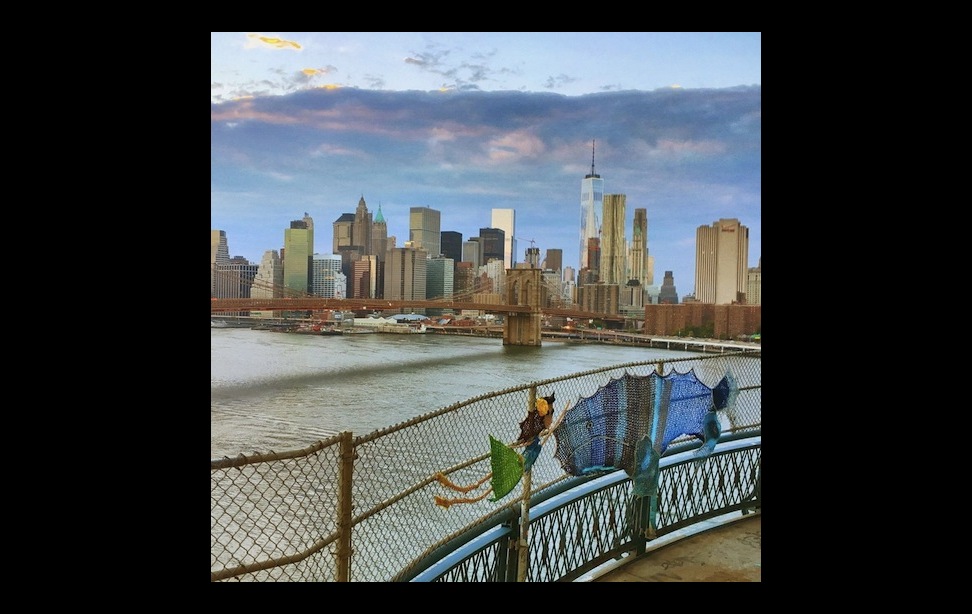 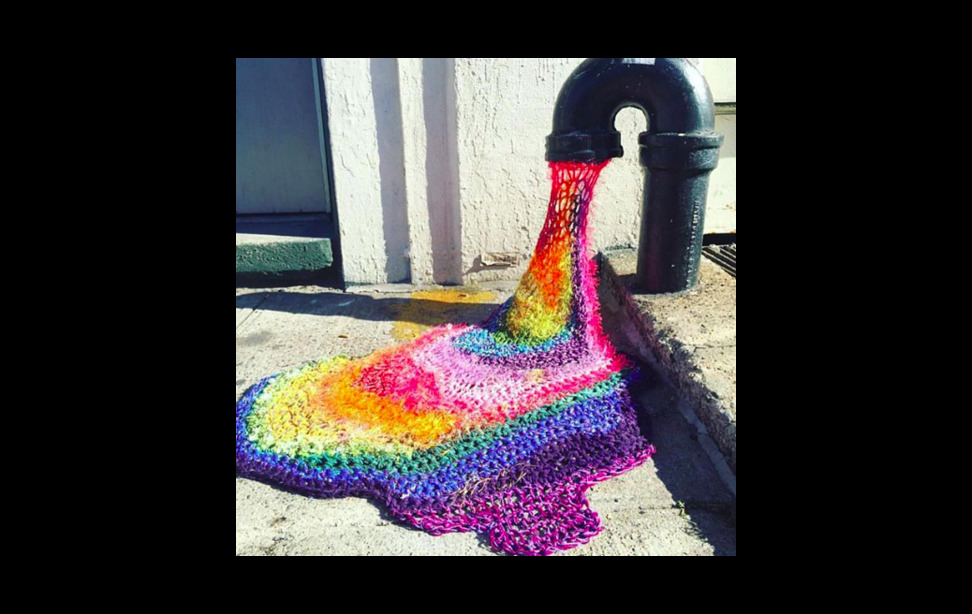 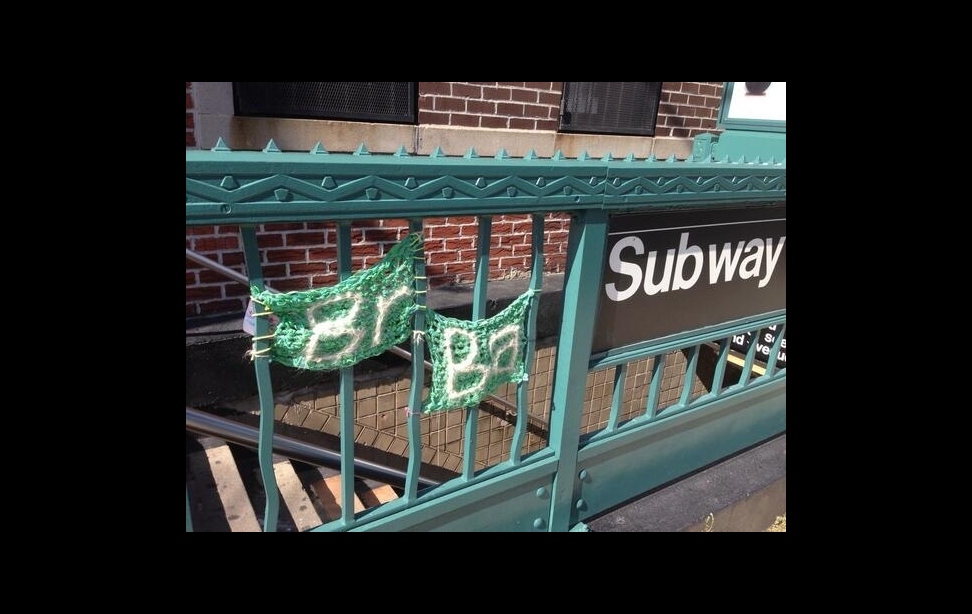 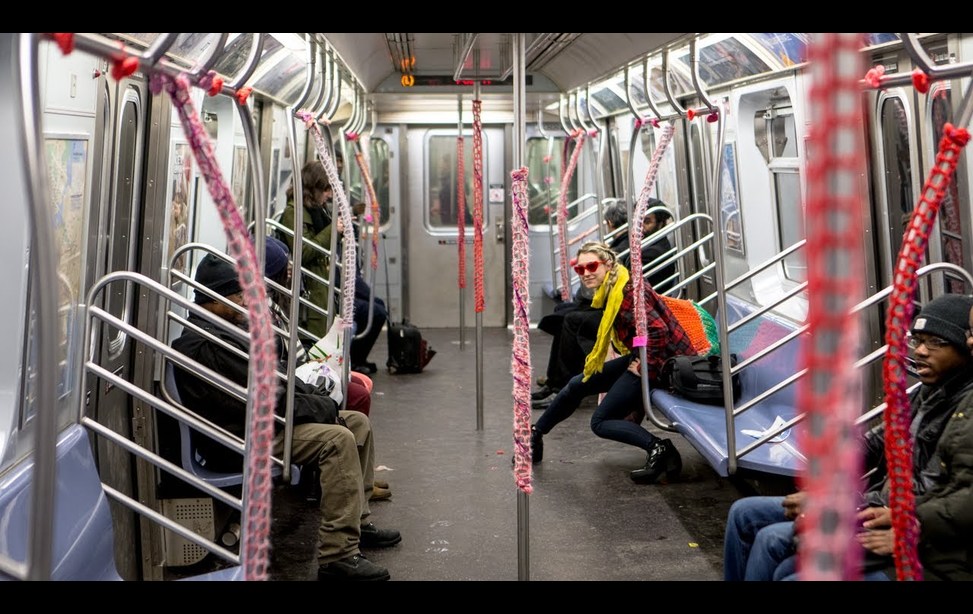 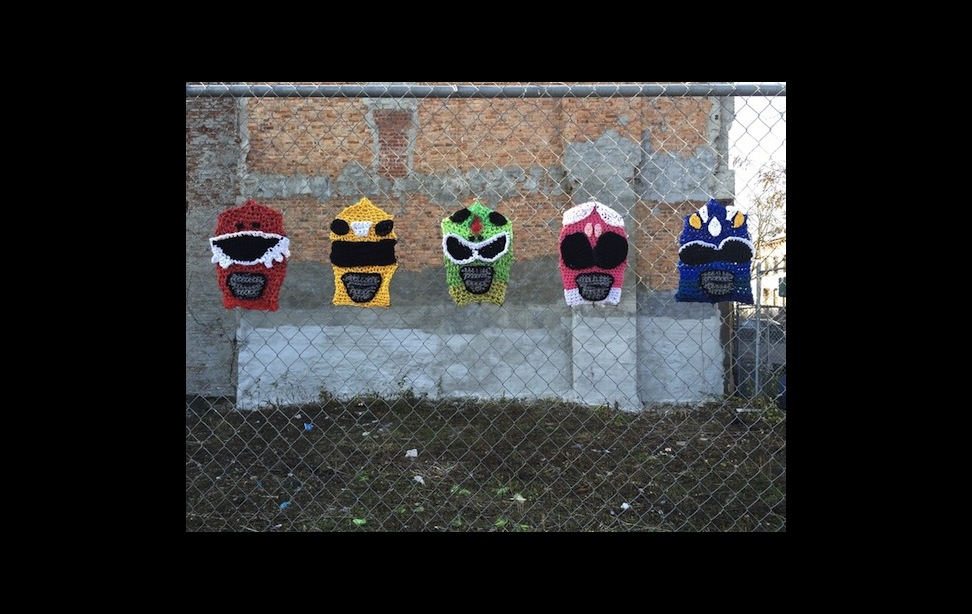 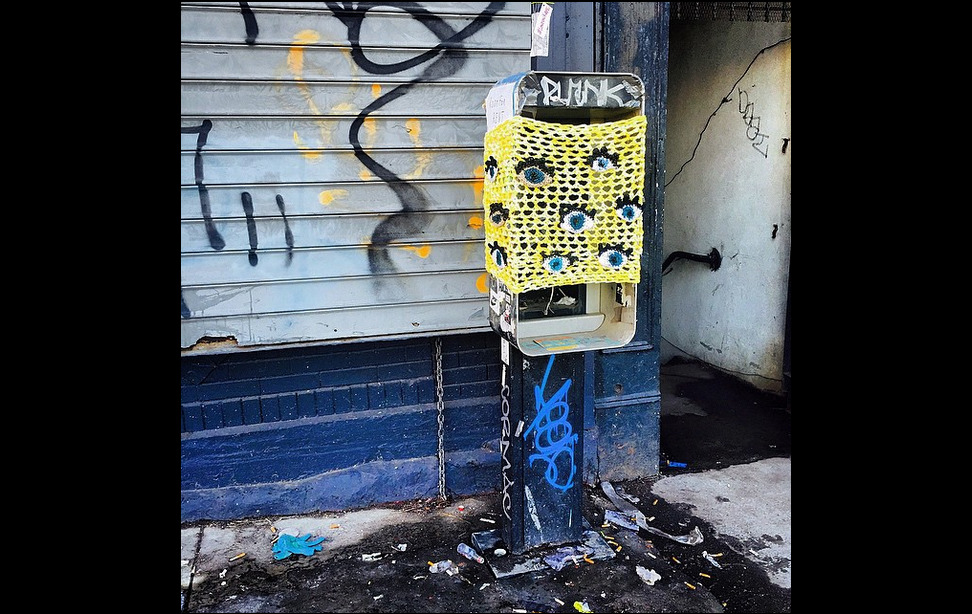 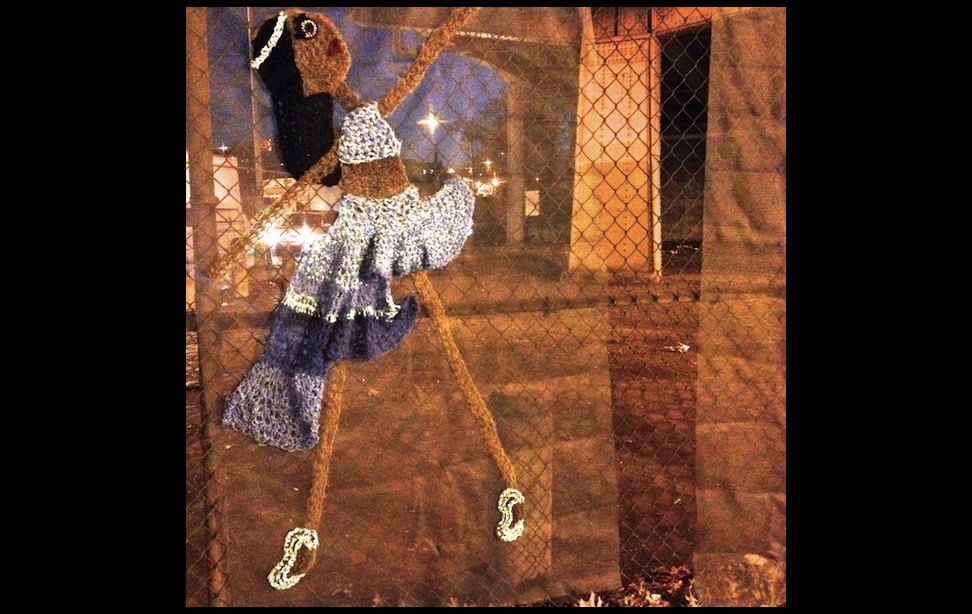 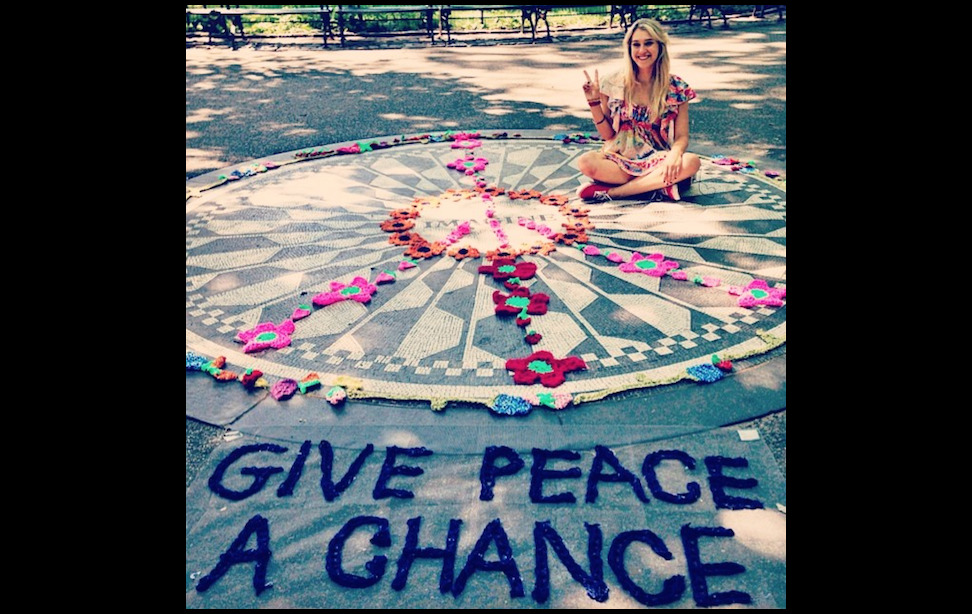 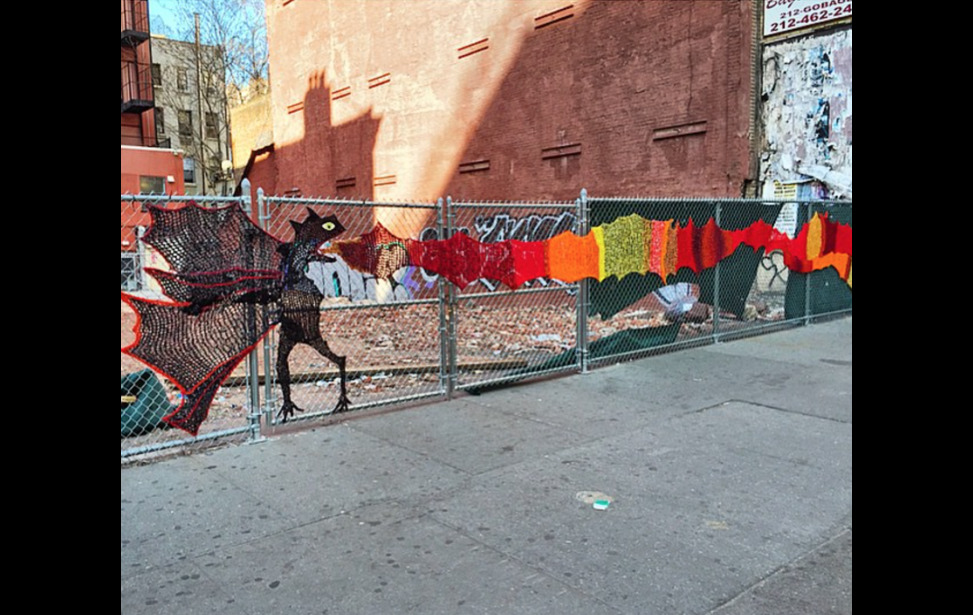 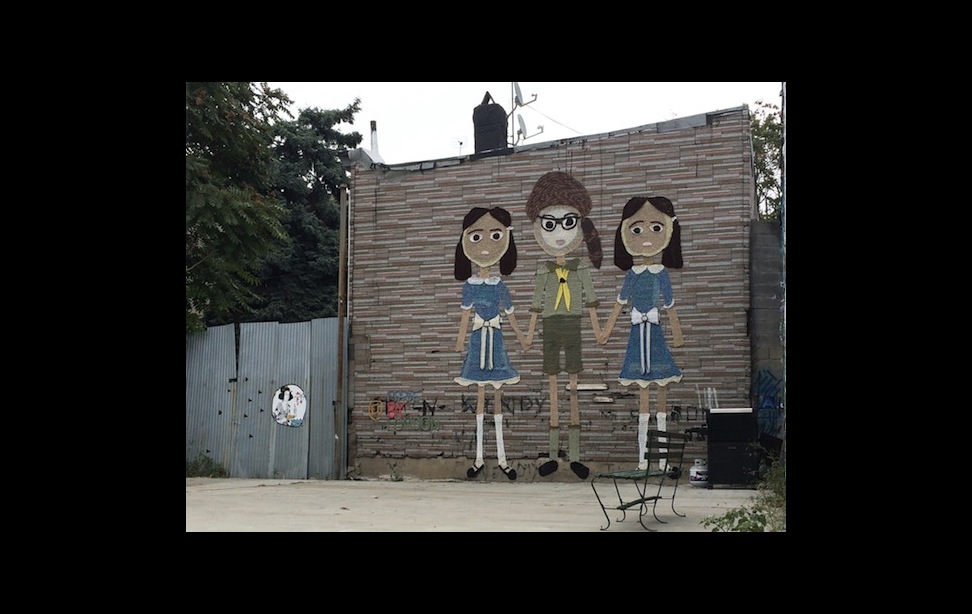 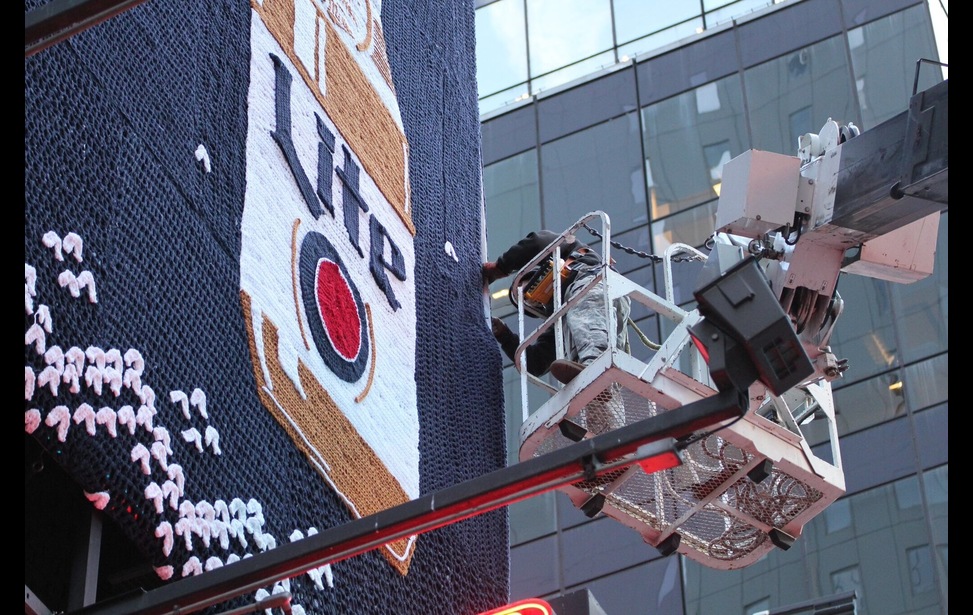 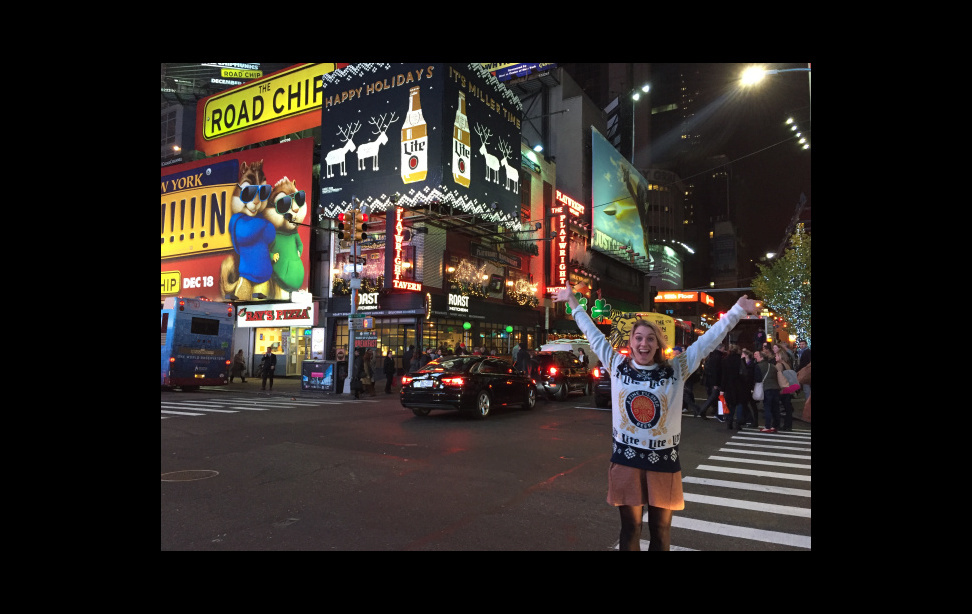 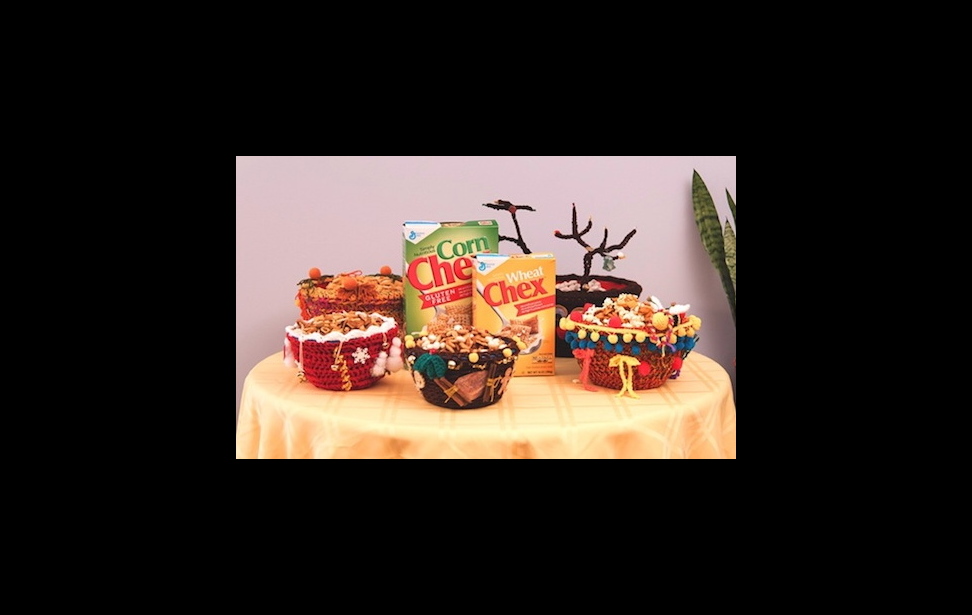 NEW YORK, NY -- London is once again prepared for a bombing. Not the English city blitzed in WWI, but Brooklyn crochet artist London Kaye, who has steadily yarn bombed the New York landscape since mounting her first sortie three years ago. Armed -- with skeins -- and dangerous -- to misanthropes -- the Malibu transplant is out to make the world a cheerier, more aware place one stitch at a time.

Yarn bombing involves covering public spaces with soft, woolly tags. Also called "yarn storming," "grandma graffiti," and "crochiti," the trendy street art is either seen as vandalism or enlightenment, depending on your viewpoint. Kaye subscribes to the latter.

"I hope that making unexpected things in unexpected places will create cause someone to remain in the moment," Kaye told thalo.com during a recent phone chat across the East River. "My way to create happiness is to draw people into the present." Unlike murals, which "have become the norm," draping public spaces in colorful cozies "adds this unexpected texture to the mix that hopefully catches people's eye and makes them think about things in a different way," she said. From transit units and chain-link fences to faucets and park landmarks, her preferred canvas is the urban habitat, though she's also making a fuzzy splash as far afield as in fashion and interior design.

Kaye's catchy oeuvre includes a "Breaking Bad" tribute, wearable Power Ranger masks and a payphone dotted with turquoise eyes dubbed the "Eye Phone." Her signature style features naïve, whimsical figures, though the simplicity is perhaps by default. "I'm not the most savvy crocheter, so everything I make is a pretty basic, watered-down shape," she said. "It can't be anything too complicated, which helps send a message with just yarn."

For Valentine's Day of 2014 she romanced L-train riders with fetching shades of pink and red. It won over even the roughs. "Not one person was negative towards crochet on the subway," she marveled. "It made me happy that New York, the ultimately melting pot, is all okay with me doing something totally random and weird. It really did just make them smile."

Another "social experiment" took her to Strawberry Fields in Central Park. There Kaye passed out 200 crocheted flowers and strawberries to passersby and arranged a fiber peace sign on the famed John Lennon memorial. "Yoko Ono actually walked by!" she recalled. And last January she launched "A Thousand Hearts," involving as many heart-shaped decorations in Union Square. Profits went to Knots of Love, a non-profit organization that donates caps and blankets to patients with terminal illnesses. "The main thing of what I do is giving back," said Kaye.

Unsuprisingly, her fans all too often avail themselves of her generosity. Things have a way of disappearing, sometimes a bit more swiftly than she'd like. To salute a recent season premiere of HBO's "Game of Thrones," Kaye crocheted a fire-breathing dragon in the West Village. "I went back to the location and hung up ribbons saying, 'Have you seen my dragon?' "

Yet the art form's very liability is also its strong suit. Unlike graffiti, crochiti can be easily dismantled. "With yarn I don't hurt the environment," said Kaye. "It doesn't leave a mark. If you don't like it, remove it and everything looks fine. I don't want to go around defacing buildings."

Still, however fleeting its footprint, guerrilla crocheting carries a whiff of the illicit. "Everything I do is legal, but because it has that street art aspect, it has a grunginess of being a little off or almost not allowed," Kaye noted.

Choosing her targets is an art in itself. The 27 year old learned a big lesson from her first big installation. That was last May in her Bushwick neighborhood, where she portrayed the young scout from Wes Anderson’s Moonrise Kingdom holding hands with the twins from Stanley Kubrick's The Shining. Not everyone was amused. "I had permission, or so I thought, but the gentleman who gave me permission did not ask the person who actually owned the building," explained Kaye. The ensuing bruhaha kicked up more than mere questions about property rights.

"That started this gentrification issue in my neighborhood," recalled the classically-trained dancer. "It opened me up to how big of an impact my work really makes, and that I do need to think on a bigger scale because people are taking notice." The "wake-up call" has since made Kaye more judicious about the content and placement of her stealth creations. It has also touched off her sensitivities as someone who might be tagged as a privileged millennial hipster.

"I see how people would think of me as a stereotype, because I went to NYU and moved to Brooklyn, but I'm not that, Kaye bucked. "The other side of this entitled white girl is that I've worked really hard for where I've gotten with my business. I worked at Apple for five years just to be able to pay my rent."

Kaye was 13 when she took up crochet, making scarves for her ballet classmates. She continued at her craft throughout her teens. A dance scholarship to New York University brought her to the City, where she soon realized professional dancing wasn't in her stars. Yet it was here amid the flourishing street art movement that she encountered "random acts of kindness" and became duly intrigued. One of those encounters was with an artist "who used yarn in a very interesting way," Kaye recounted. With a little research, the budding designer stumbled on her current calling.

It was love at first bomb. "When I did my first yarn bomb, instantly I knew: this is what I want to do," she said. The setting was Bedford-Stuyvesant, where she was living at the time. At first she worried that her work might not find approval. So she resolved to put up new offerings every day over 30 consecutive days "for people to enjoy." That the first three samples remain on display is a lingering source of gratification. "The neighborhood truly embraced this crochet thing that's getting more and more popular now, but really was not known at the time," she said. "I'm always suprised by the different kinds of people that can connect with the art."

Not just in New York, but around the globe, the matronly handicraft is enjoying a current vogue. Whether it can spread like traditional graffiti is questionable, yet given the aggression now plaguing so much of humanity, it's easy to imagine how bombing with mere yarn would bring comfort to anxious communities. For Kaye, who was mentored by her grandmother, there's a certain womanly pride and hope to the whole swaddling enterprise. "Yarn brings a feminine voice to the scene," she mused. "It's cool that a girl is able to make her way in the street art world -- which is so masculine-heavy -- and make an impact." Kaye has even come to embrace "that super-sparkly, frilly type of yarn" that she previously shunned. The ends justify the means, especially given the industrial surfaces she tends to target. "For yarn bombing, having that little bit of texture really gives it an extra pop," she said."

Kaye belongs to a growing sorority of yarnsters who bring pop culture playfulness as well as civic mindedness to their beautification work. A seminal figure in the movement is Magda Sayeg, who in 2005 knitted a mit for the door handle of her Houston boutique. From there her stitchery took off, encouraging other D.I.Y. sorts to crack out the needles. Kaye too pays homage to the so-called mother of yarn bombing, though it's Polish-born Agata Oleksiak whom Kaye singles out as "a legend." The two met when Kaye sold "Olek" a Mac and glimpsed her own future in low-tech innovation.

Apple has yet to sponsor its former employee, but other corporations have gotten in on the fun. Miller Lite and its ad agency TBWA / Chiat / Day recently tapped Kaye to produce a billboard in Manhattan's Times Square district. Patterned reindeer, snowflakes and beer bottles adorn the branded message of this giant alpine sweater. If ever a yarn bombing embraced its retro roots, this unabashed salute to folksy kitsch is that artifact. The project wasn't Kaye's first company collaboration -- she's had stints with Starbucks, Chex Mix and Isaac Mizrahi's yarn line, among others -- but it was her biggest to date. An estimated 250 hours and six football fields' worth of Lion Brand yarn went into achieving its handspun look, she said.

Besides ample compensation, Kaye took away rich practical wisdoms. What advice does she have for fellow artists about managing a team? "Be very clear and specific about what you want to accomplish with the people whom you're hiring before you bring them into the room," she said. "It took me a lot of time to plan out exactly what I needed, how much I would charge and how much that would cost me overall."

Communication was key for the three-week job, with nearly as many texts and emails looping around as stitches. Besides giving out a steady stream of answers, she supplied each crocheter with more than enough yarn. Kaye's usual solo work requires no such delegating of tasks and materials, but as she put it, "If I'd had to crochet the whole thing myself, it would have taken way more time than I spent planning it.

Time is a recurring theme with the rising street artist, whose billboard comes down this January. That's where social media makes its mark. "I can put a post on Instagram and it forever lives on. So whatever happens to that piece of art, as much as I'd love for it to always stay up, because I've been able to photograph it and share it with the world, I can kind of relax and know that people are seeing it even if I know it doesn't exist in its original form for all eternity. It's so important for any artist who is doing something that won't last forever."