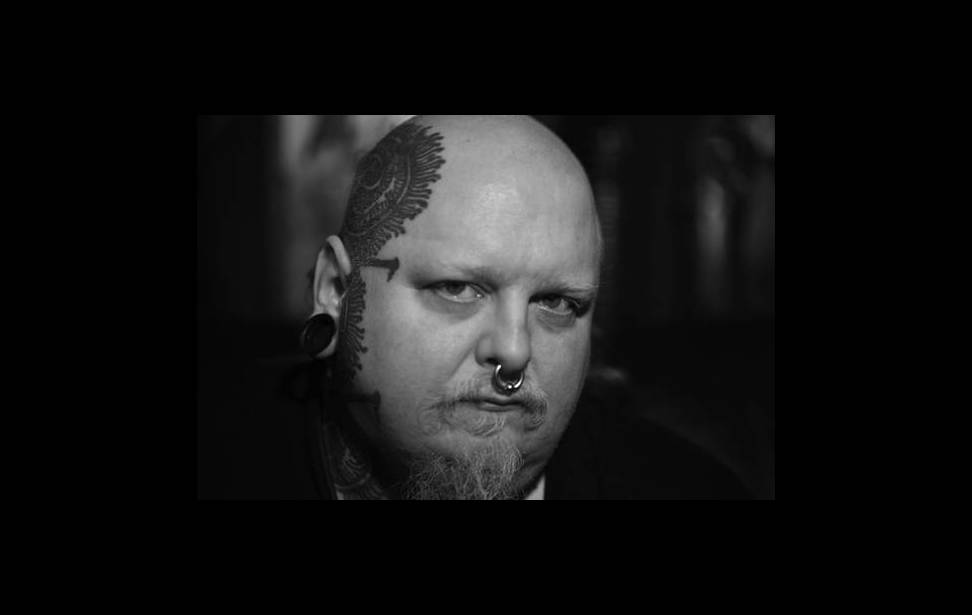 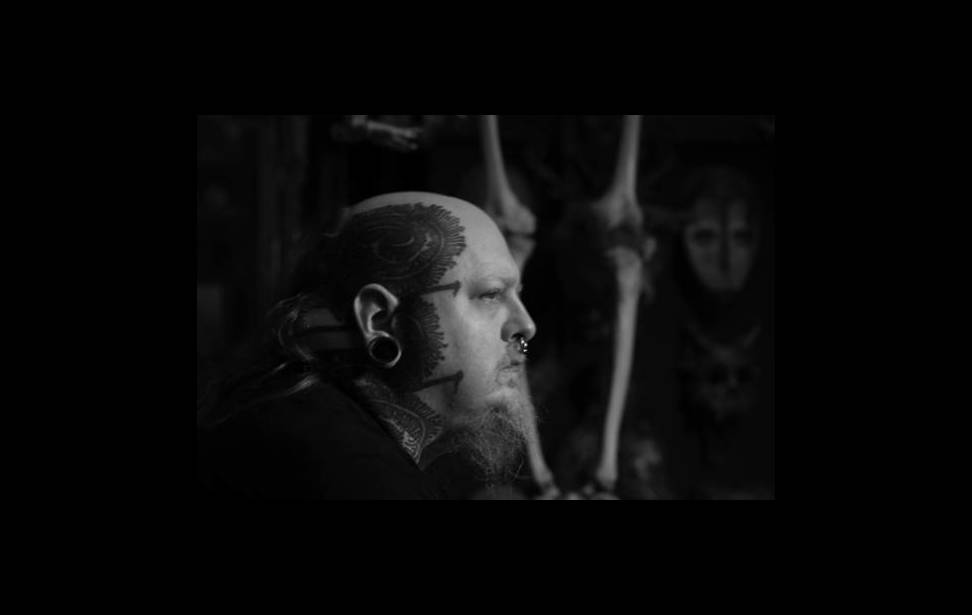 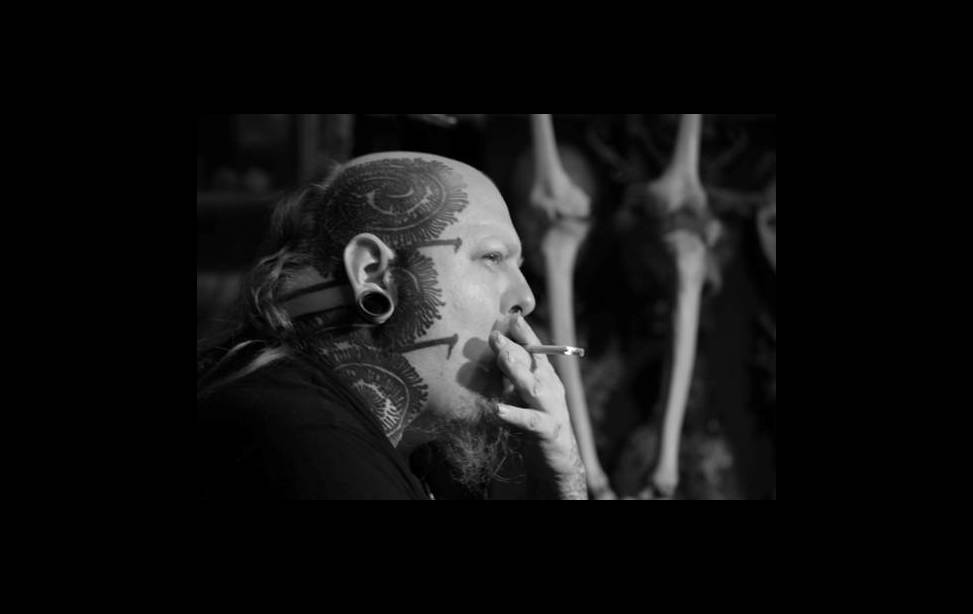 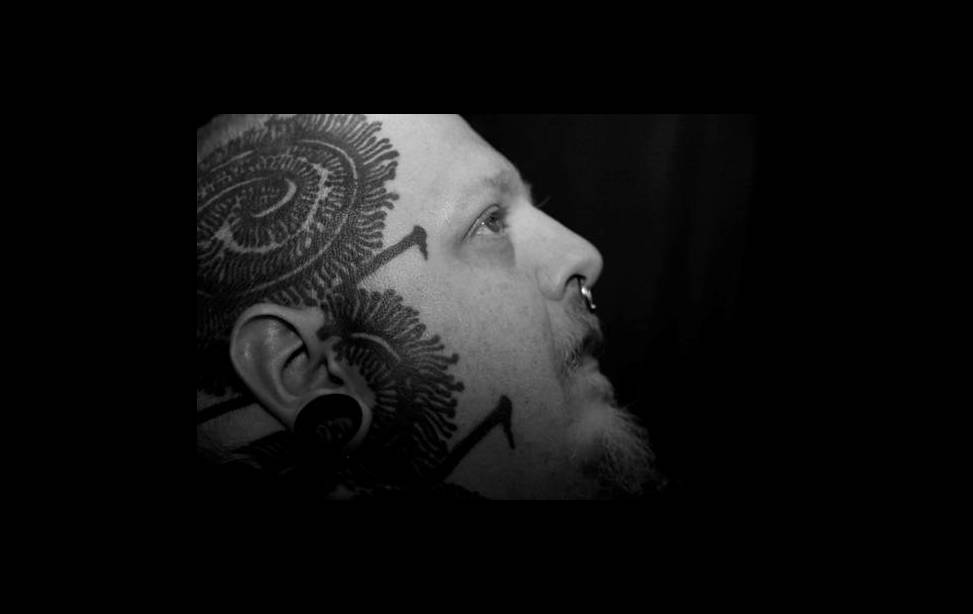 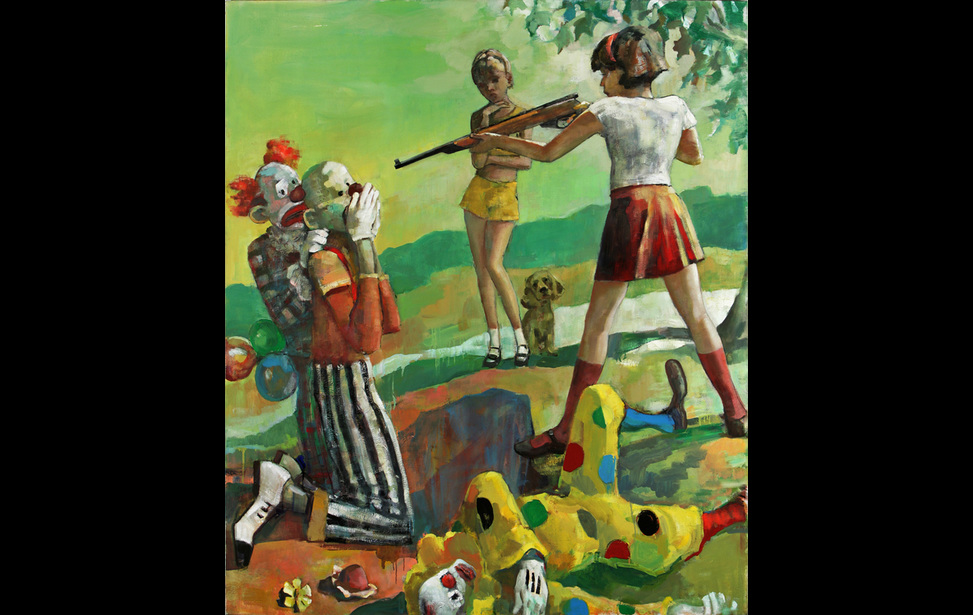 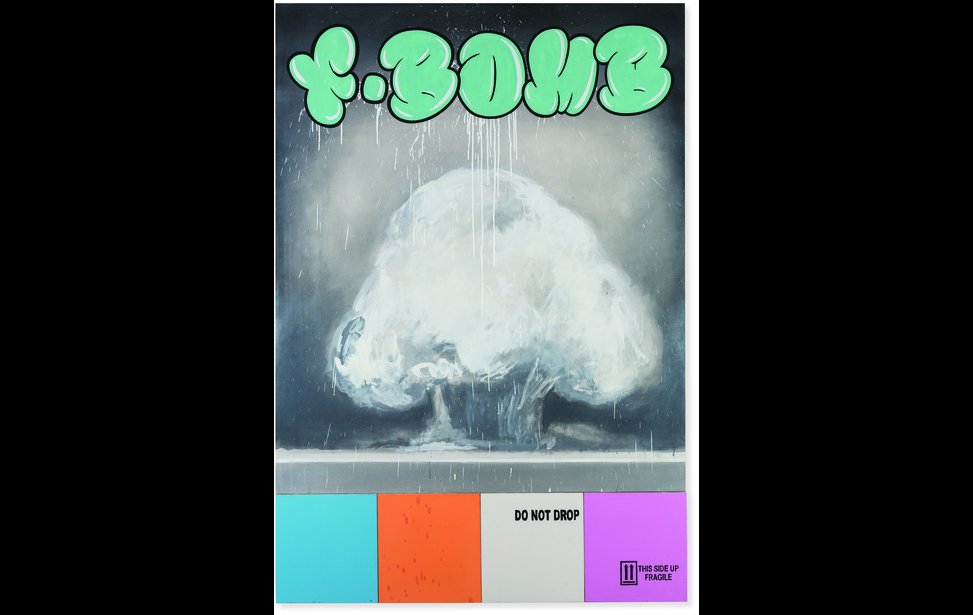 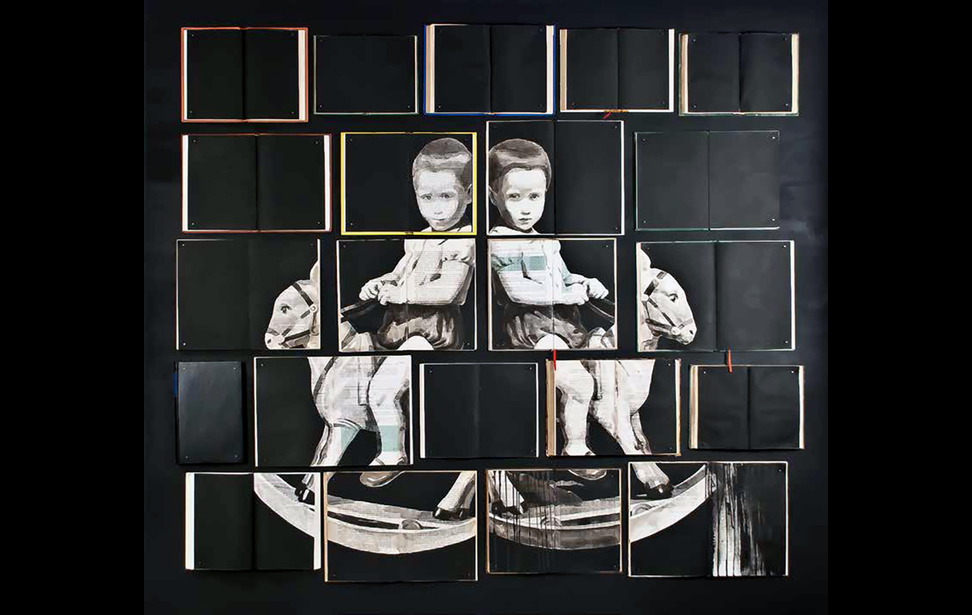 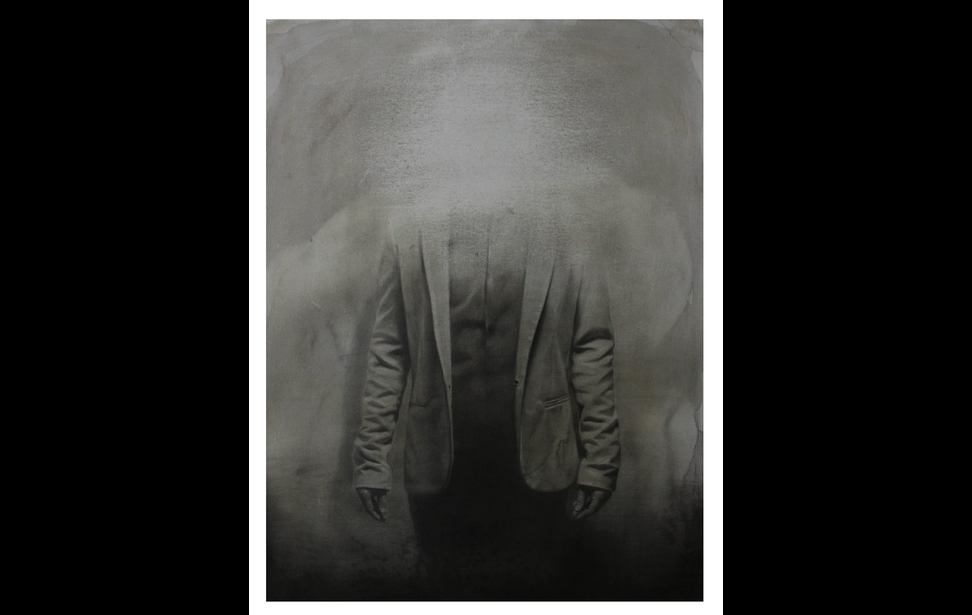 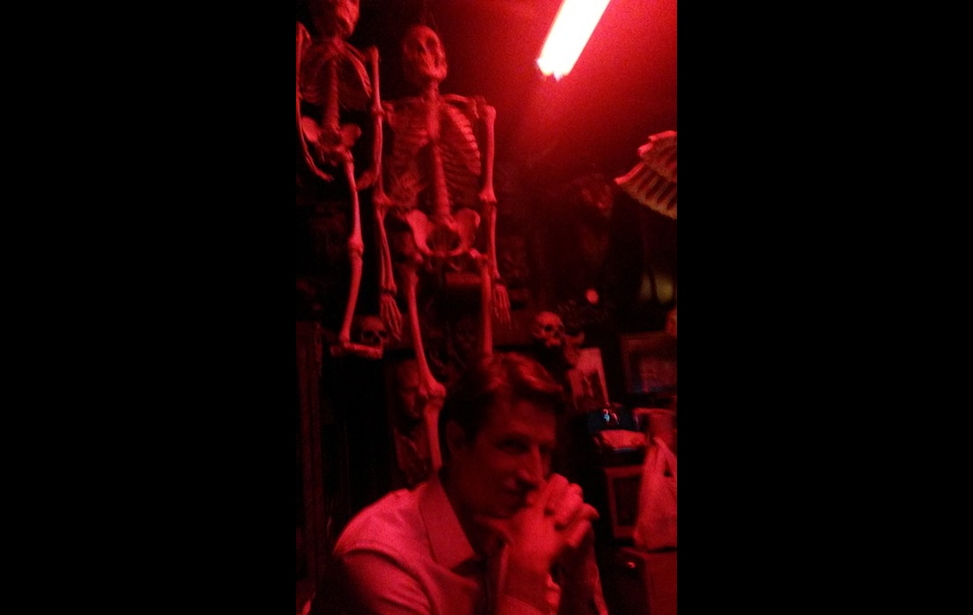 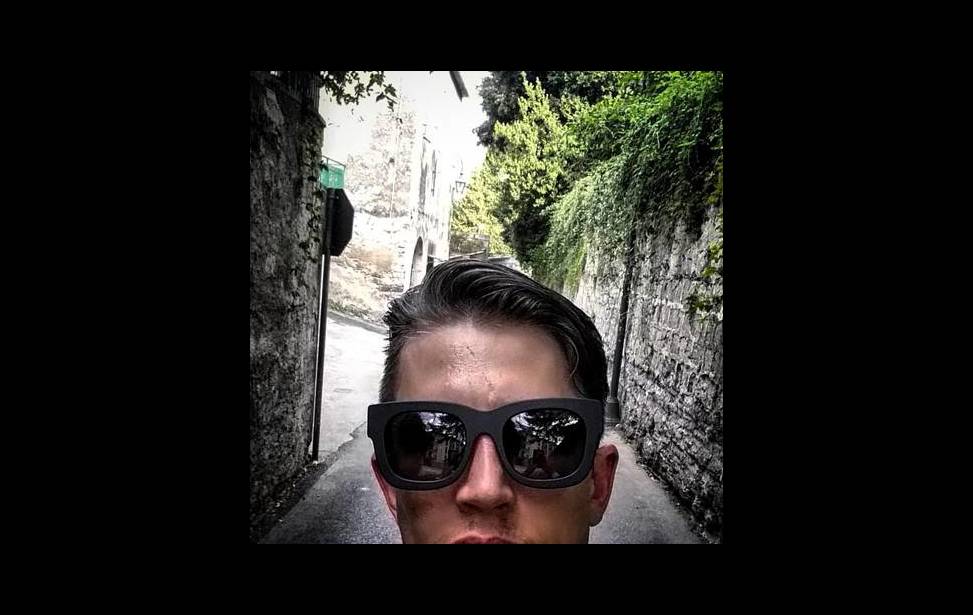 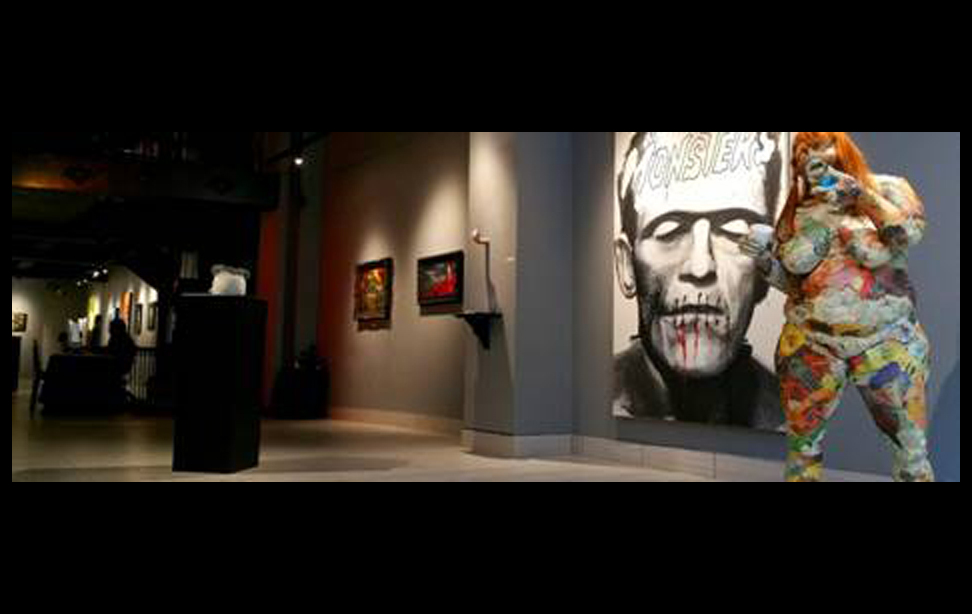 As much as Paul Booth's skin is marked by dark art, the tattoo artist himself is marked by an ethos of barefaced candor. “I'm a rebel and an outsider and an outcast as a child," he told thalo.com last Saturday evening while inking a sleeping dragon on his last client of the day. "So I've always thought of my own path, though I always hope people will come along and enjoy it with me."

The latest twist in that path is a curated exhibition space called Booth Gallery. With a week to go till its November 14th launch on the ground floor of Booth's atmospheric Hell's Kitchen complex, the 40-something took a breather to muse on his new project. If all goes according to vision, Booth Gallery will shake the zeitgeist with provocative contemporary art and draw a broad community of engaged questers. A mainstay of that strategy is its varied roster of respected conceptual artists. The inaugural show features domestic names such as Mike Cockrill, Chad Wys, Jesse Draxler and Todd Lim alongside Russian-born Ekaterina Panikanova, Colombia's Johan Barrios and South Africa's Ryan Hewett. Dubbed "Second Sight," the show invites audiences to go beyond the five senses in perceiving slippery reality. Like Booth Gallery itself, the show is a bold move. But it's also a chance to move up the food chain.

Sporting a scraggy goatee and nose and ear piercings, with black inky swirls illustrating the right side of his head, Booth is well acquainted with the challenges of gaining acceptance for the more shadowy realm of iconography he has been associated with. "We're at the lotus flower of the art world," he shrugged. "Lowbrow art is outsider art, but tattoo art is outside outsider art, because it's even farther away from being considered fine art."

Booth's biggest triumph and obstacle are the same: a global reputation as the flesh stainer of metal royalty including members of Slipknot, Slayer, Pantera and WWE’s the Undertaker. Yet the greyscale mastery and exorcising themes that have made him, per Rolling Stone, the "King of Rock Tattoos" belie his vast creative appetites. Beyond tattooing, the die-hard Carvaggio fan makes regular forays into painting and sculpting, and he has even edited a film. And then there's his own exploits in music making. Whether smithing tunes or just listening, Booth understands the mutual inspiration that can fire up both the audio and the visual. "If you need to get agression out, you listen to heavy metal because it helps you vent," Booth noted. "My work is like the visual version of electronic music because it's aggressive art -- monsters and creatures."

It's only fitting that Booth chose the name "Last Rites Tattoo Theatre" for his studio when he first hung its spookish shingle in the Village. That was in 1998, and nearly a decade later he moved to Chelsea and added a gallery devoted to macabre aesthetics along with a screening room for?horror flicks. There, as in his new location, Booth also presented collaborative performances under the rubric of ArtFusion Experiment. Gradually Last Rites Gallery gained a cult following among creators and connoisseurs of dreamy surrealism with a thing for excavating the remotest recesses of the mind.

"No soul leaves the contemplative and moving environment unscathed," is a proud Last Rites motto. It could well be delivered with a grin. Dangling skeletons, coffin couches, images of skulls arrayed like Aztec tzompantli all have a bony hand in revealing Booth -- drenched in blood-red lighting -- as surely the gamest spirit in the dark-art world. What's his attraction to the cadaverous? "There's the social aspect of it, which is that they creep people out," Booth cracked. "I grew up under the Catholic thumb, and I got in trouble for drawing skulls, which is why I drew them more." Later, while working as a repo man, the New Jersey native took to airbrushing ghoulish images on cars and motorcycles. But it wasn't until he inked his daughter's name on his body that he came of tattoo age. His practice is 27 years in the works and counting.

Asked how he envisions the melding of Last Rites and Booth Gallery realms, Booth took a beat and leaned in. "Last Rites deals more specifically with the dark side of the human condition," he said, elaborating, "I opened Last Rites Gallery because I wanted to merge the fine art world and the tattoo world in my space. We don't see the focus of Booth Gallery as being on the dark side, but it's still an exploration of the human condition, whether political, social, psychological or philosophical -- or whatever the suggestion is."

For the founders of Booth Gallery, the operative word is "palatable." As director and curator Casey Gleghorn explained, "When you look at the work that will be shown at Booth Gallery, when you break it down to the core ideas, it's very much Paul, but it's being presented in a way that's palatable, whereas coffins and skulls may not be so palatable." In his short tenure, Gleghorn has become all too familiar with the art world's resistance to Last Rites' murky depths. "You've got artists who don't want to show dark art, and don't want to be labeled dark artists," he said. "Context is extremely important."

What's the Holy Grail for Booth and his new venture? "It's all about communicating ideas, seizing opportunities and pushing those envelopes individually," as Booth put it. However the Booth Gallery may verge from the Last Rites scene, Booth makes no bones about his belief that "the goals of each can help one another." With a planet to save and humanity in the lurch, two ongoing mindtrips are undoubtedly better than one.