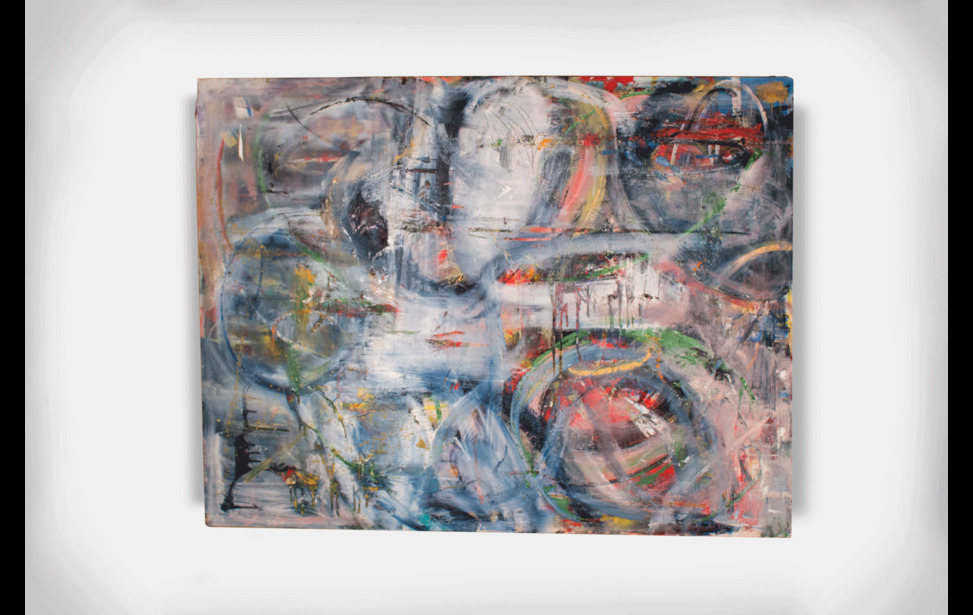 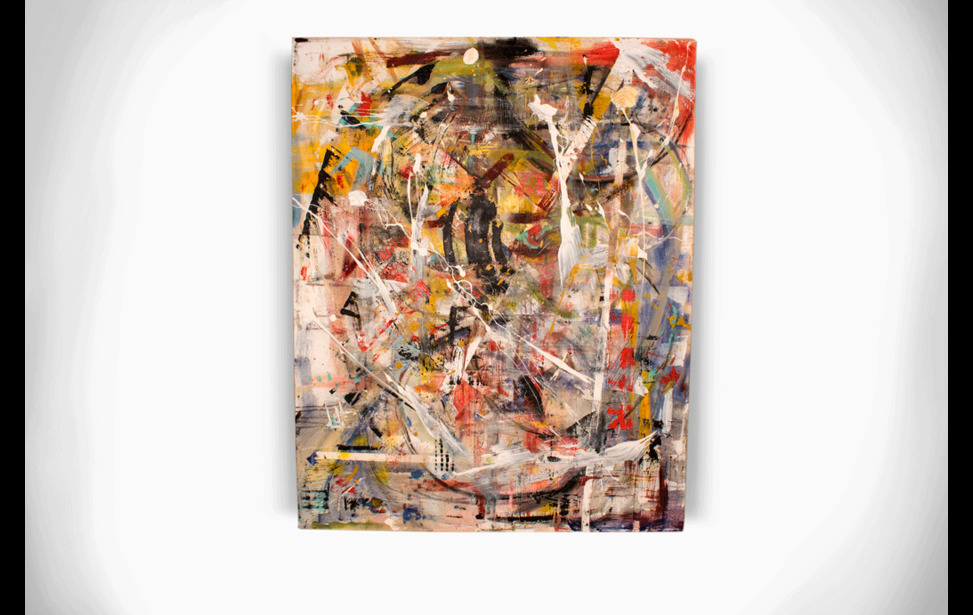 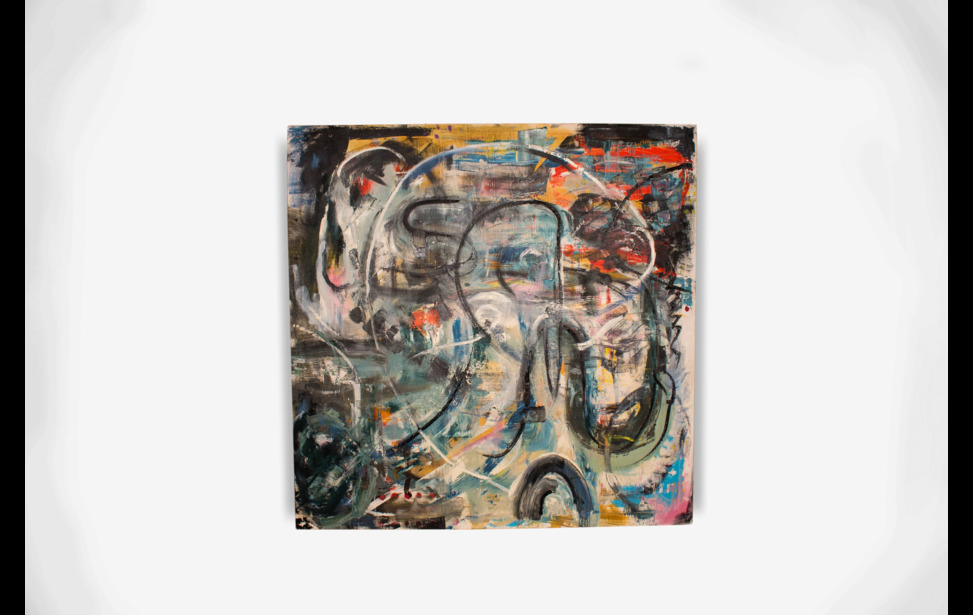 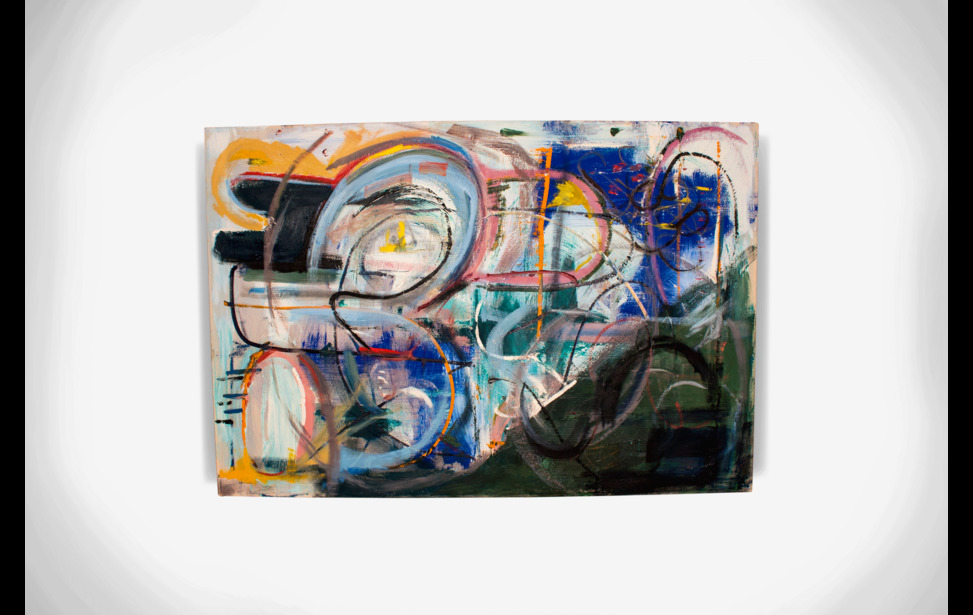 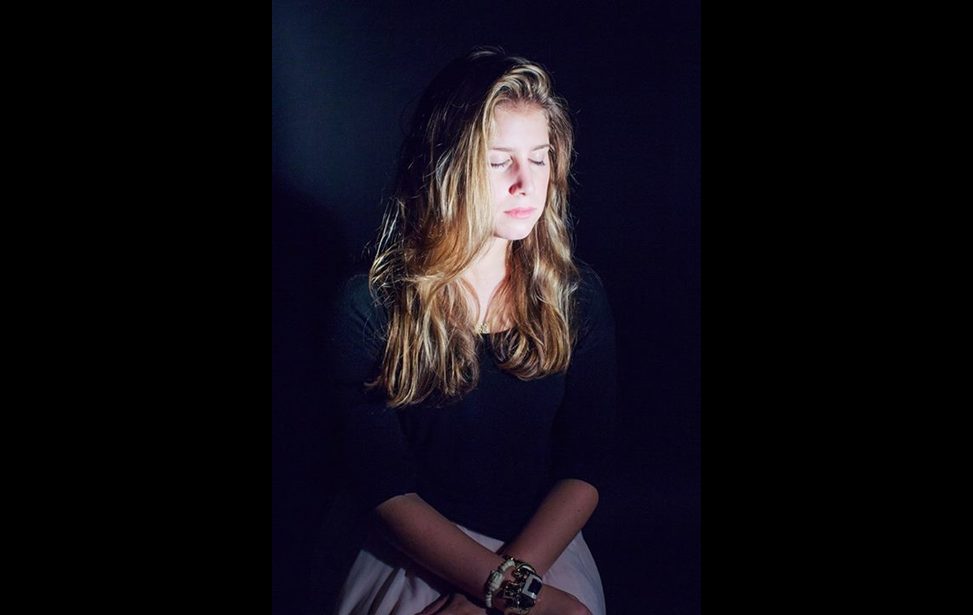 On a recent August evening, Long Island artist Paige Beeber entered the Pine Hollow Country Club with a swarm of butterflies in her gut. She wasn't there to golf but rather to host her debut solo exhibition. "I went in and said to myself, 'You're probably not going to sell,' " Beeber later confided to thalo.com. "It was a very vulnerable moment for me." Her jitters were unfounded. Five paintings elicited red dots (sold) within the first hour.

Two of them, "Celebration" and "Passive Aggressive," bear titles that suggest states of mind and how they might take shape. A third piece, "Borgo Pinti," is named after the street where Beeber lived -- and deeply felt -- in Florence. It has a distinctly charred sensibility, but, like the rest of Beeber's oils on canvas, the muscularity of its streaks and swirls is shadowed by intimations of mood.

There's an ambiguity to these compositions that lets us make what we will of them, prismed by personal experience and biology. Whatever our take, the energetic blacks, whites and colors rouse our curiosity about how they got there.

As Beeber explained, this involves a technique of applying paint over masking tape. The resulting textures create depth and let the viewer decide "whether something is internal or external," as she put it. "You can interpret the work as a physicality or something more emotional." Not even the artist, herself, has a fixed optic. "I don't want to know where it begins and ends," she said. "It's an endless cycle that the eye follows."

Beeber's dabs and smears render homage to the annals of post-modern abstraction, from Gerhardt Richter to the sinewy expressionism of Willem de Kooning and Franz Kline. Beeber also gestures to the life forms of Cecily Brown, but oddly, it's the guiding spirit of Alice Neel's portraiture that informs her borrowings. "Though Alice was figurative, what draws me to her work is that she psychoanalyzes the people she's painting," Beeber offered. "Whether it's about a self-portrait or an abstract painting, there is a concept of the psyche, and in order to have an audience identify with your work, you have to learn how to use that psyche."

A tinge of bravado joins with the youthful self-doubt that is a leitmotif in Beeber’s self-reflections. These qualities also shaped the foundation of her art.

Growing up in Syosset, New York, Beeber had a speech impediment until age 6 or 7. "It was embarrassing for me," she recalled. "I would keep to myself. When I wanted people to know how I felt, it was usually through drawing." If art was her prefered gateway to communicating with the outside world, it also provided a means of escape. Recounted Beeber, "I would make the whole cast of The Wizard of Oz out of popsicle sticks and styrofoam I'd find around the house and stage a scene within a shoe box. I was really popular!" she joked. Following her early forays into visual art came more extroverted pursuits: dance, chorus -- even musical theater.

By high school, at Huntington School of Fine Arts, the once shy girl would find herself on sturdier social and creative ground. "Things started to come together and I began to realize what I could do with art," she said. It was then that she made up her mind to take art seriously and not just as a hobby. The next step was to earn a BFA at Alfred University. She credits the school's interdisciplinary approach -- including collaborations with engineering students -- for her well-rounded skills as a working painter, designer and sculptor. And faculty stand-outs such as Patrick Brennan, Kevin Wixted and Andrea Gill get her special acknowledgement.

Pine Hollow wasn't technically her first solo show, but the previous one occurred during senior year. Beeber just graduated this past May. Suddenly thrust off campus and into the commercial art market, the blonde-curtained 20-something got an immersive course in professional dealings. "It was a whole new environment for me," she said. "None of my professors were there."

Pricing her work marked another first. How to determine each item's worth? "Celebration" took a full year to make, whereas "Borgo Pinti" emerged in three short months. Yet, with the former measuring 65" x 49" and the latter 52" X 48", they both consumed roughly the same amount of materials. Ultimately, Beeber set her store by calculations of size and supplies. The heftiest canvas, "Mother" (72" x 49") went for $3,000; smaller ones ranged between $2,500 and $2,000.

Labor wasn't part of the math. Nor for that matter was sentiment. Still, it's intriguing to imagine what Beeber might have charged had she factored in emotional costs. For obvious reasons, let's start with "Passive Aggressive."

Like most of Beeber's paintings, it was created while she was working on five other canvases at once. "I would only work on the painting if I felt like I was put in situations that were passive agressive," she said. "If the mood struck, I would go back to this painting and -- depending on how I felt -- I was just curious about what colors I was more attracted to." The very spark for "Passive Agressive" was an experiment. Explained Beeber, "The original idea behind the painting was to see how long a feeling would last."

For all Beeber's explorations with "Passive Aggressive," it was "Borgo Pinti" that marks her watershed. The setting was Florence's Santa Reparata International School of Art during spring semester, 2014. "Italy was a massive turnaround for me and my work," she said. Prior to that, the then-college junior had been concentrating on color. But she felt increasingly stuck. "I wasn't getting the compositions I wanted, and there wasn't great value to the tones." A professor, the American painter and instructor Andrew Smaldone, allegedly advised her, "The best way to work in color is to work in black and white." Converting to greyscale proved highly liberating. "It's sometimes easier to see how in-depth a painting could be," Beeber relayed. The method has been a keeper. Today she typically takes a black-and-white photo of a color painting to gauge its contrast and depth of field.

Beeber's fling with black and white is only rivaled by her passion for color theory. Even a painting as monochromatic as "Borgo Pinti" is a study in the visual effects of color combination. Beeber approaches color theory in two phases. Typically, when she starts in on a painting, the business of color mixing and juxtaposition is instinctive. Part two of the process is meditative. It's here that Beeber will pore over research about relevant artists and their own grapplings with color theory. Back in the studio, she'll then thrash out the lessons learned and how to apply them.

For all the pictorial reasoning deployed, Beeber's work pulsates with a buoyant energy. So it's only fitting that she believes "there's something childlike about art." Yet experience has shown her that bright-eyed enchantments can only take an artist so far. After all, that's why she always has a number of paintings in progress at the same time.

What tips would Beeber share with other young professionals? "You can't wait for inspiration to strike," she stated. "If you keep practicing, inspiration can follow. Sometimes you just have to make it happen."

And when it does? How then to assess a work's commercial value? Echoing the advice Beeber received for her Pine Hollow show, she urged, "Be realistic but don't sell yourself short."

Photo of "Celebration" by Emily Eisenberg. Courtesy of Paige Beeber.

Photo of "Mother" by Emily Eisenberg. Courtesy of Paige Beeber.