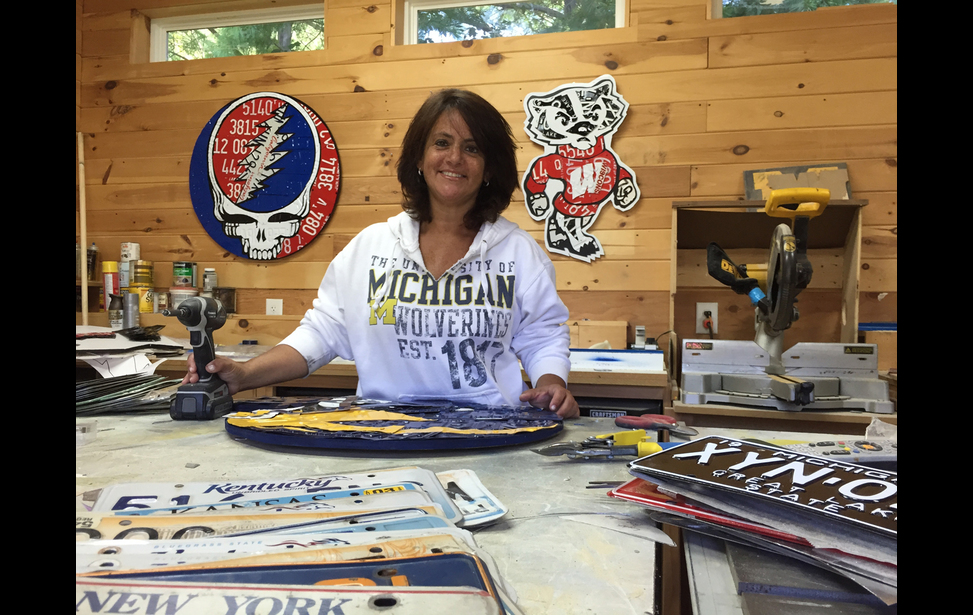 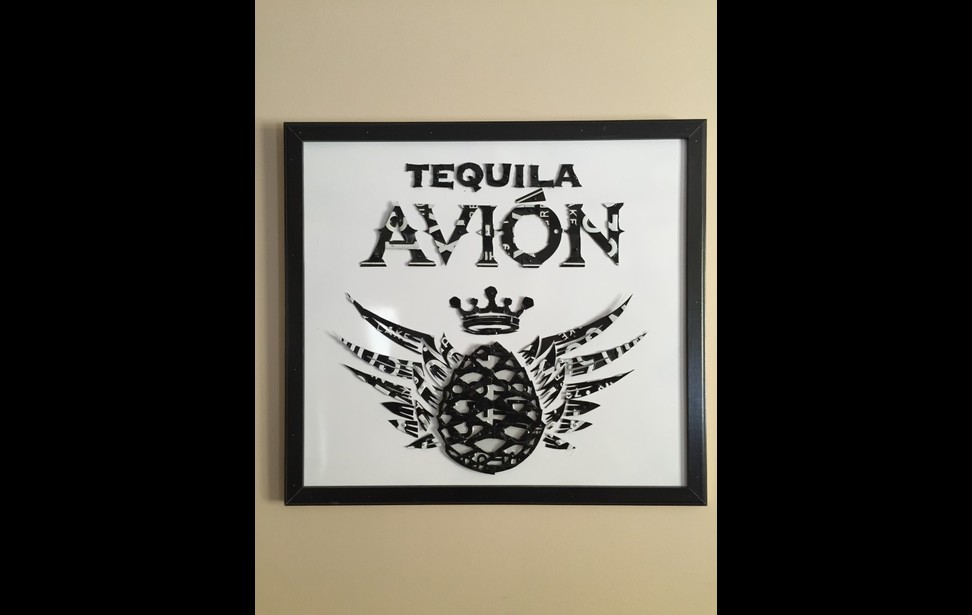 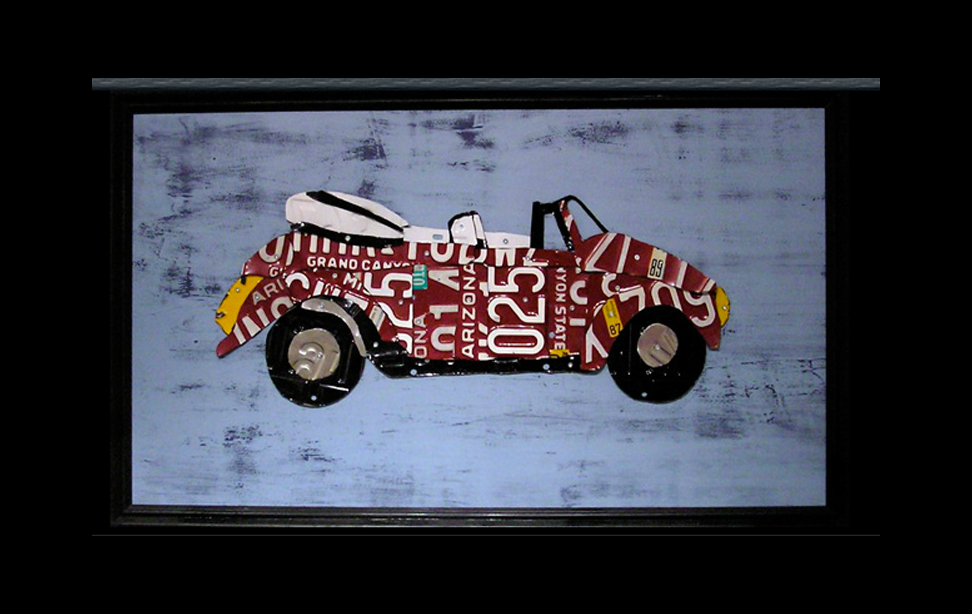 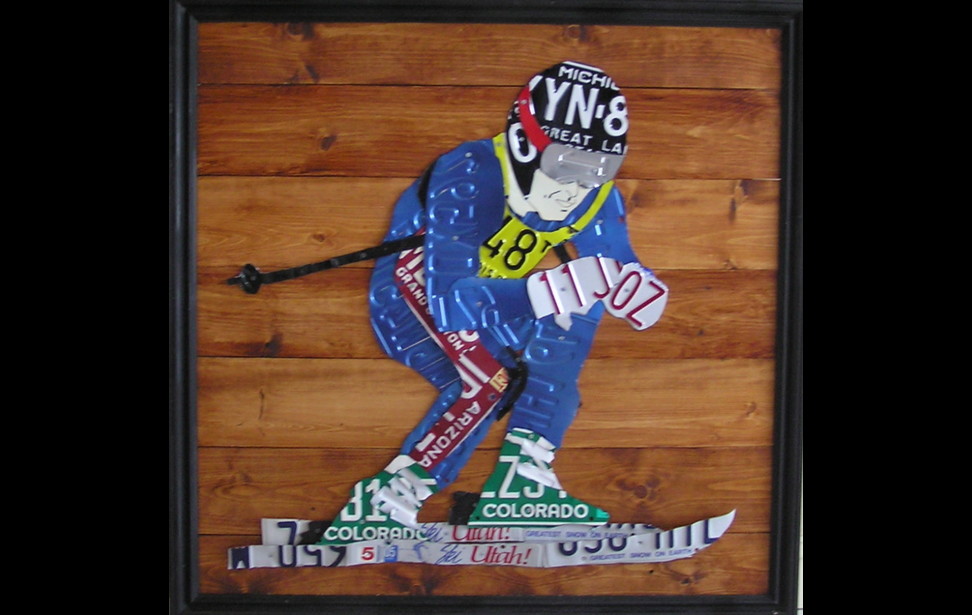 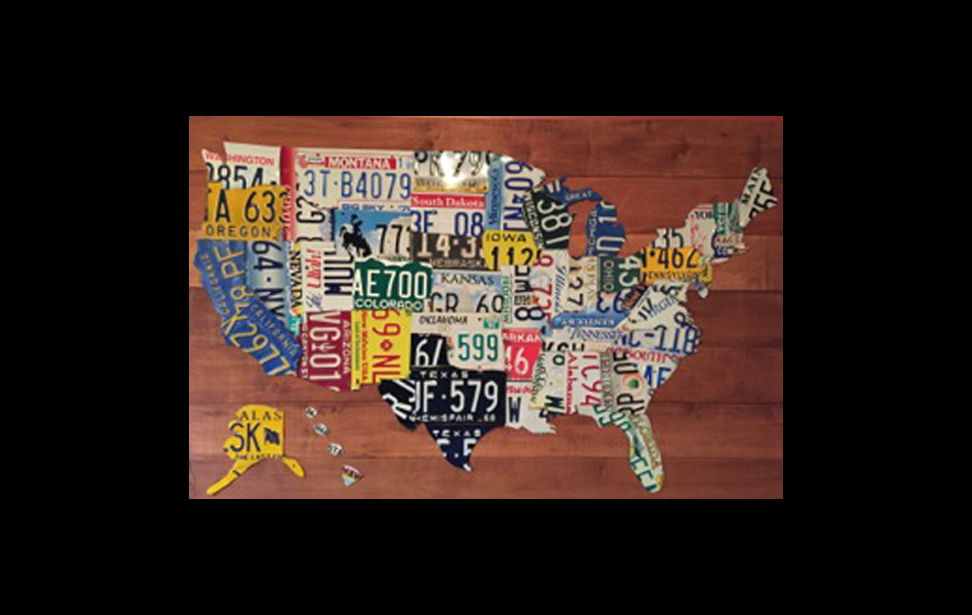 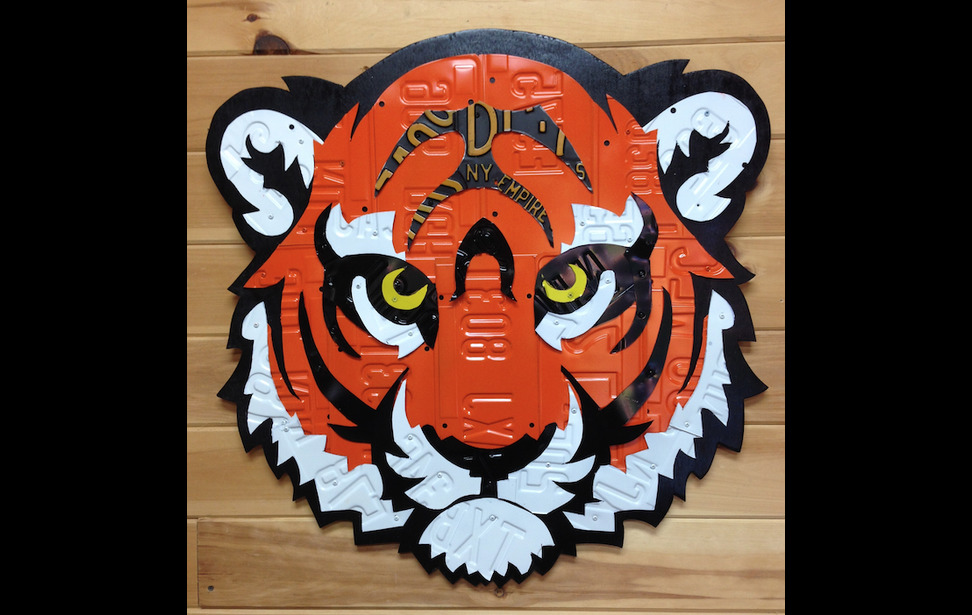 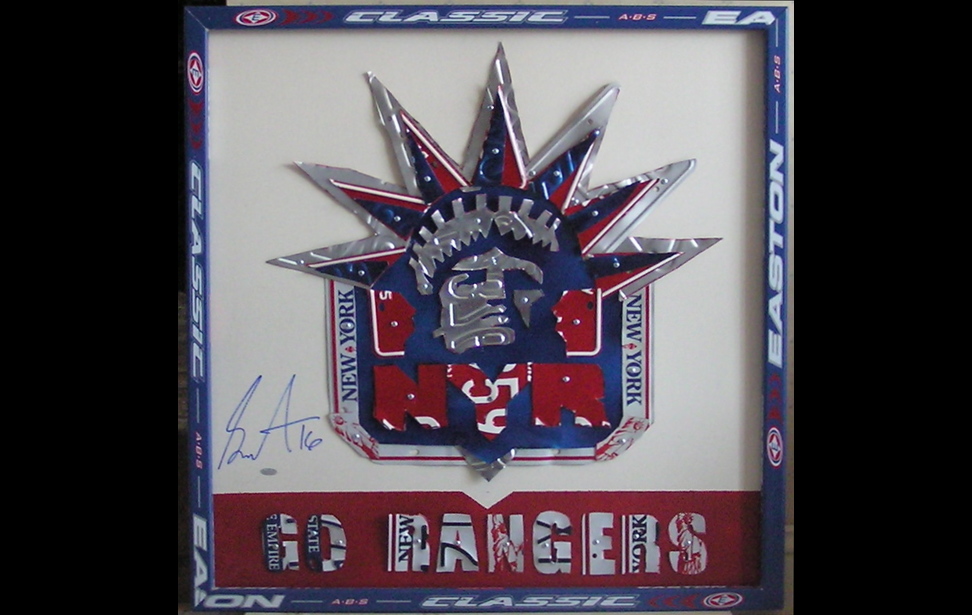 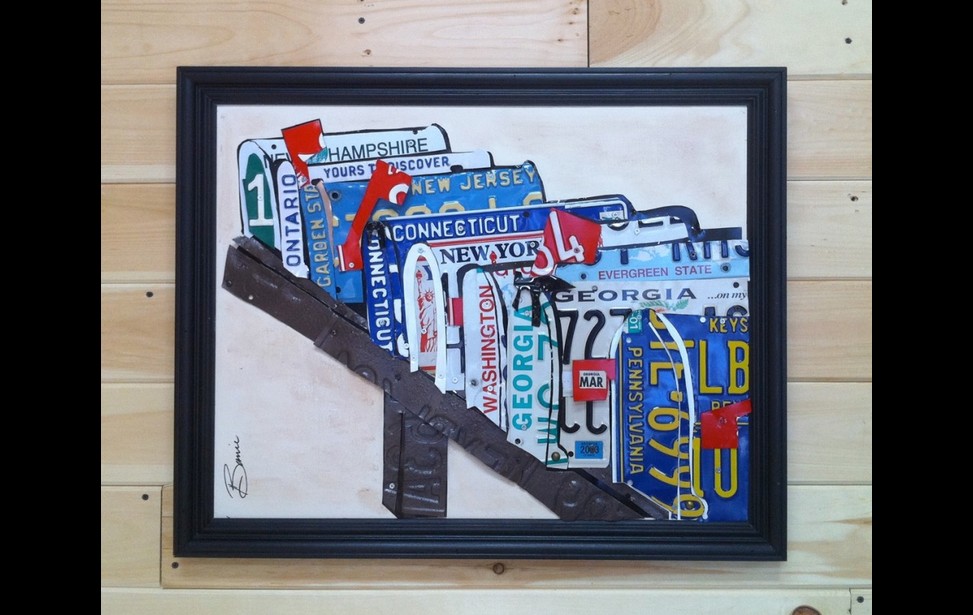 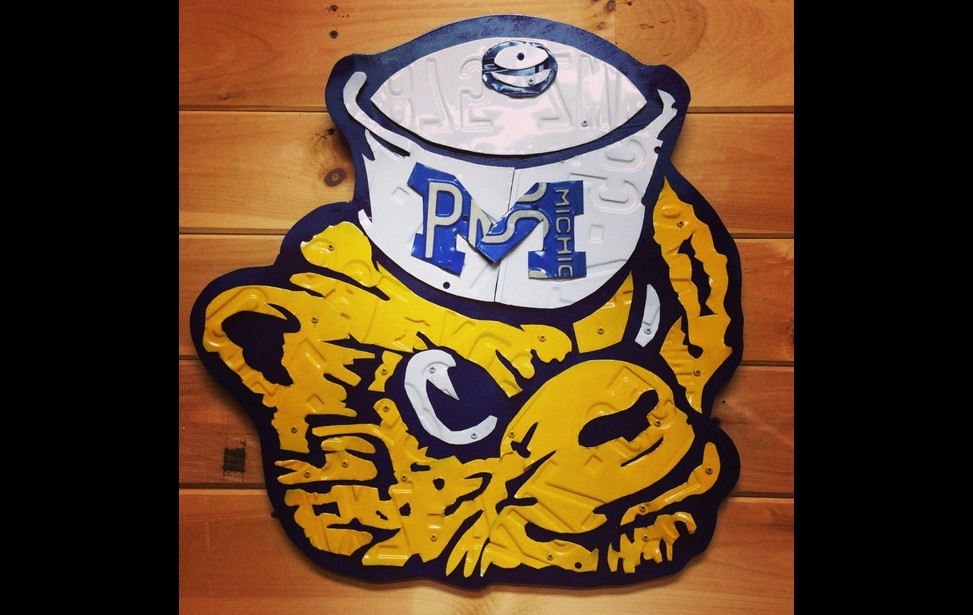 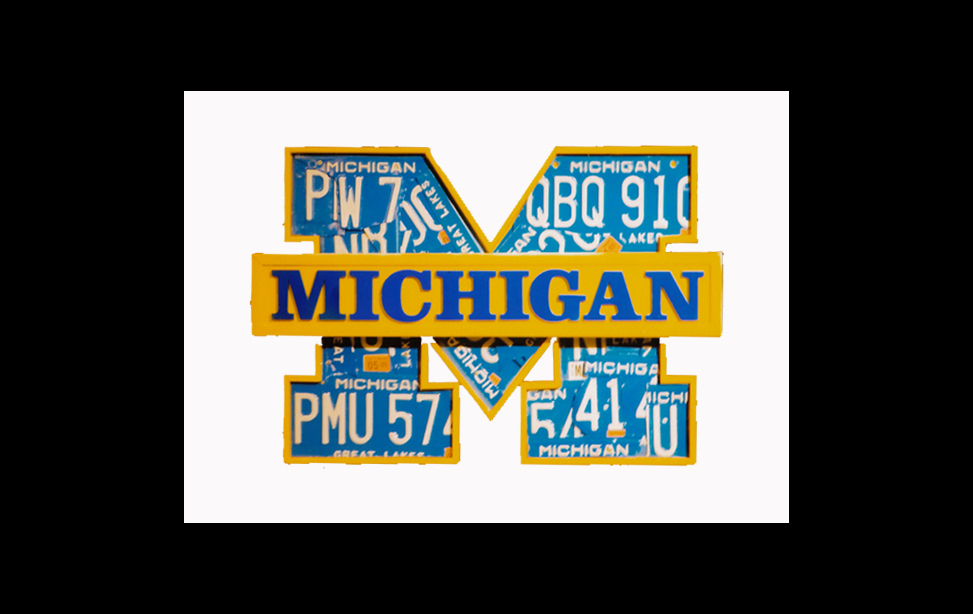 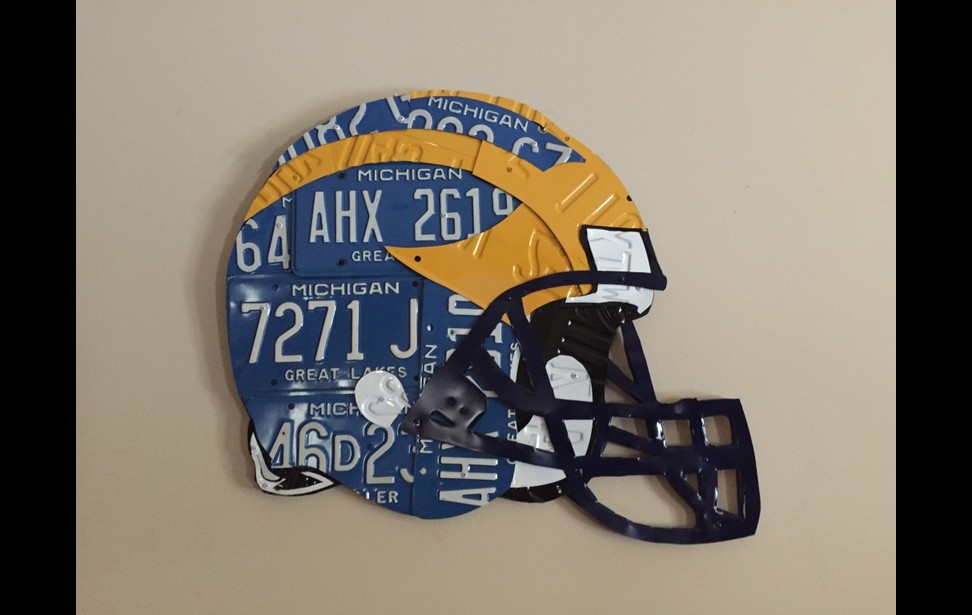 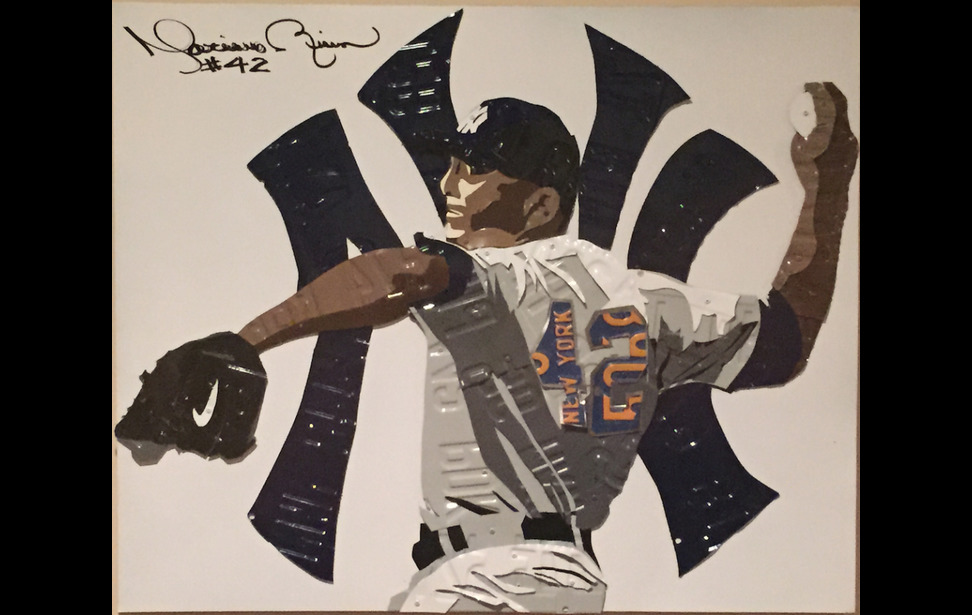 Artist Bonnie Schwartz calls her whimsical line "Artistic License." Glinting with pop images of celebrities, logos, college mascots and car motifs, it gleefully champions manipulation for dramatic effect. But there are other reasons for the company moniker. Schwartz's creations are crafted from license plates.

Long before plying her art, the Woodbury, New York resident prided herself on being handy with tools. She built her own kitchen from scratch and then whipped up a bar, fireplace and even a home theater. The construction skills she honed as a stay-at-home mom now stand her in good stead. "I try to put a screw in a place that no one will know is a screw, she recently told thalo.com about the tricks of her thriving trade. Collaging disparate metal pieces takes "anything from welding to screws to nails."

If you press Schwartz about her favorite piece, she'll tell you that it's Downhill Racer. Set against wooden planks, this catchy cutout depicts a skiier suspended in action. Royal blue, scarlet, forest green and chartreuse bring out the figure's cartoon hero sensibility, and that effect gets a nudge from the slogan on his white blades: "Ski Utah! Greatest snow on earth." The Utah plate has a proud history. Initially issued in 1985, it won first place in the Automobile License Plate Collectors Association's design competition the following year.

Schwartz's love affair with license plates has a backstory as well. Two years ago she was diagnosed with Stage IV breast cancer that spread throughout her body. Recalled Schwartz, "One of my friends said, 'Stop feeling sorry for yourself; go out and do something that you truly enjoy.' "That something turned out not to be the law practice or business enterprise she'd envisioned as a girl growing up in Woodbridge, CT, nor a sequel to the marketing positions she'd held after graduating from the University of Michigan. Rather, she took a page from her artist sister and went the creative route. Two years before, Schwartz had made her husband a map of the United States using old license plates that she wanted out of their garage. Back then the kids were still living at home, and she had no thoughts of developing a full-time métier. With her new health report, reworking expired license plates was a way to breathe fresh life into defunct materials.

"I wanted to create art from something that someone would normally throw away when they were done with it," she said. "I started to make something pretty out of something that was bad in my life." Not only was Schwartz creating works of visual pleasure, but the process proved therapeutic to boot. "It has a beginning and an end," she remarked. Additionally, stretching the conventions of what constitutes art is itself "fun and challenging" for the artist.

One of the biggest challenges is securing the raw stuff for her creations. For Schwartz, this means tracking down vintage plates. "All of my plates are used and weathered," she noted. These days, golden oldies are getting harder to come by. Exacting standards have sent her to sources ranging from flea markets and local suppliers to eBay and internet dealers, where she has been known to buy 400 - 500 plates at a swoop. The ultimate get is a plate made of steel. Those beauts met their death during World War II, which ushered in the age of aluminum; some wartime plates were even made of pressed soybeans.

Schwartz has no quibble with aluminum plates -- which she says are easier to cut than steel -- but she draws the line at the non-embossed variety. "I don't use any non-embossed plates, because they don't have any magic to them. They're just a flat piece of aluminum and they don't have any value." This generally means foraging for plates that pre-date the advent of digitally printed tags in the 90s. No such specimens lurk in the artist's studio, which at any given time stocks 2,000 - 3,000 plates.

Yet one innovation, reflectorized backgrounds, is well represented among her cache. Dating back to the 50s, the so-called scotchlite plates offer up snazzy accents. Take for example Timber Lake Camp Tiger. Its two yellow eyes glow in the dark, literally giving the custom logo an optical effect. And what of the lustrous stock's provenance? Schwartz traced it to Illinois of 1975.

Especially welcome in the artist's inventory are surfaces with bright colors. "I might not need them now, but I'll need them some day," is how Schwartz sums up her acquisition credo. Currently, she is in the market for more inventory from ski-friendly states; her newest series features women skiiers. Having shored up her stash from Vermont, Wyoming and Colorado, among other places known for their ski slopes, she plans to roll out the series by the first snows. What added materials she'll require may depend on a flash of inspiration. "When I go into my studio, things happen and ideas come to me," she said, remembering the moment when she decided to build a frame out of hockey sticks for a hockey-themed piece she was asked to create. The customer's instructions were essentially, "I'm a Rangers fan. Do what you want." Schwartz finds freedom in these sorts of limits.

As word has gotten around of her work, commissions are increasingly coming in. One such job began with a batch of photographs showing mailboxes from eight addresses where an individual client had lived with her spouse. Schwartz then matched these with corresponding license plates, and yielded up a customized anniversary gift celebrating personal and popular nostalgia. "A license plate is a part of Americana, part of history," she reflected, adding, "It's the thumbprint of the automobile, and each is unique."

Schwartz favors such singularity in her own work. "People give me the artistic license to do what I want," she said, pun clearly intended. If the medium is Schwartz's own invention, that same idea hit the scores of contemporary artists who are also mashing up icons of vehicle identification. To name but one, California-based artist and sculptor Michael Kalish was a pioneer -- and remains a top name -- in the genre. Transforming these utilitarian automotive objects for high/low art has been around for some two decades, though it may have a ways to go before it's fully mainstream. A winking romance with kitsch envelops the artform even as it holds a totemic appeal for guardians of authentic artifacts.

Not that ironizing has consciously figured in Schwartz's repertoire. Nor does she necessarily have pretensions of producing "high art." The U-M alumna has mounted such playfully adoring homages to her alma mater that her fandom can only be pure. A giddy reverence similarly infuses such Schwartz favorites as her Mariano Rivera piece, signed by the star baseball pitcher, himself.

"Everybody wants a piece of history," Schwartz mused. For her part, she favors things of the past that are apt to survive long into the future. "A license plate is not just a piece of paper. It's three dimensional, and there's a sense of longevity about it," she said. Recycling the bold fonts, numbers and images that have traveled America's roads lets Schwartz navigate the frontier between the fleeting and the permanent. "It gives me the ability to enjoy every day and make something that will last a lifetime."  To learn more about Bonnie and her artwork, please visit www.artisticlicenseinc.com.