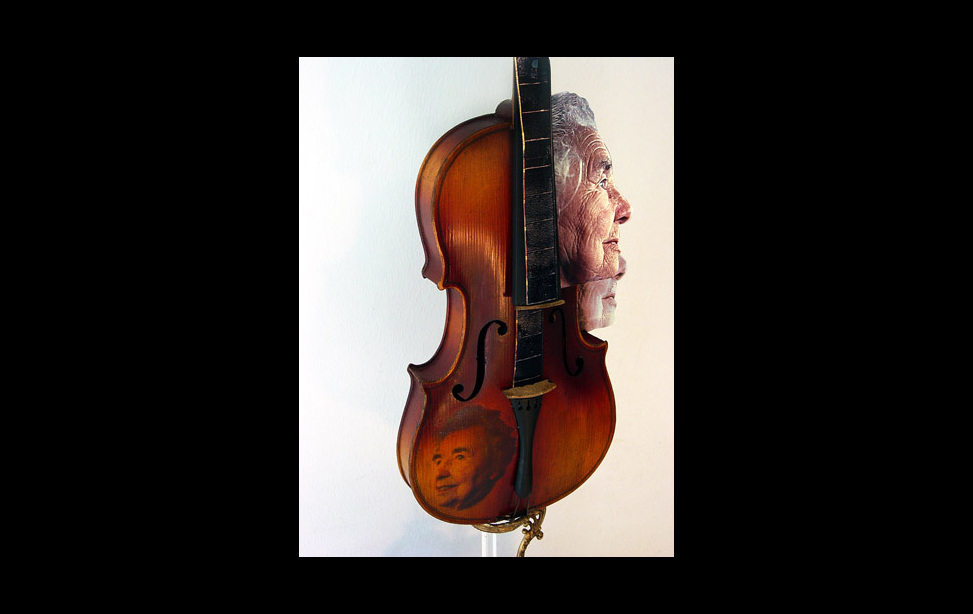 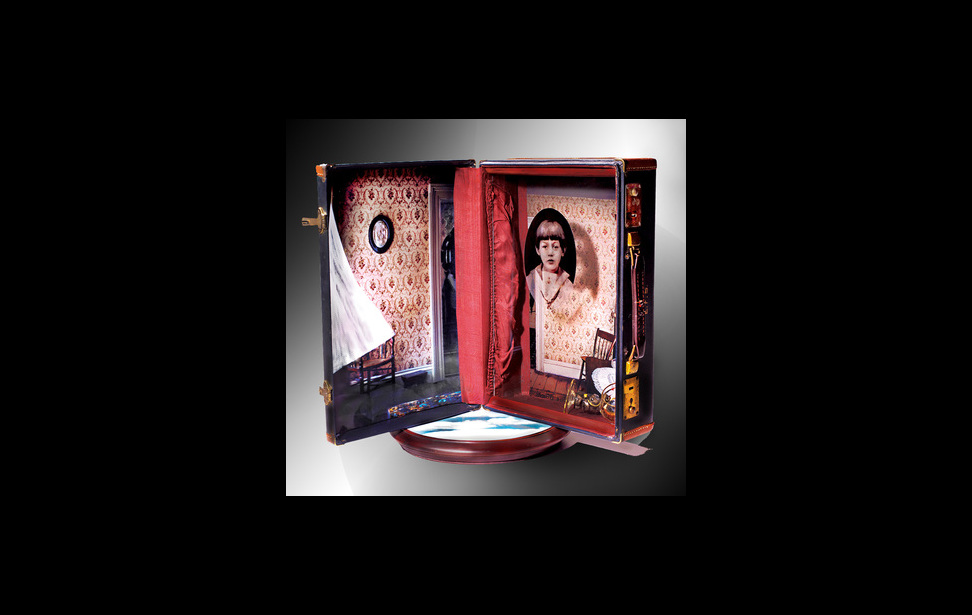 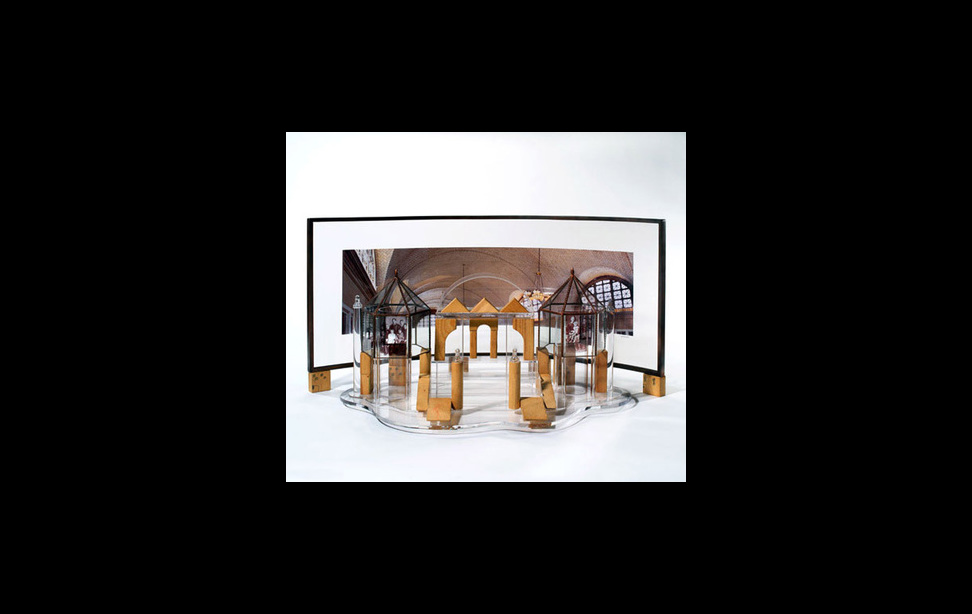 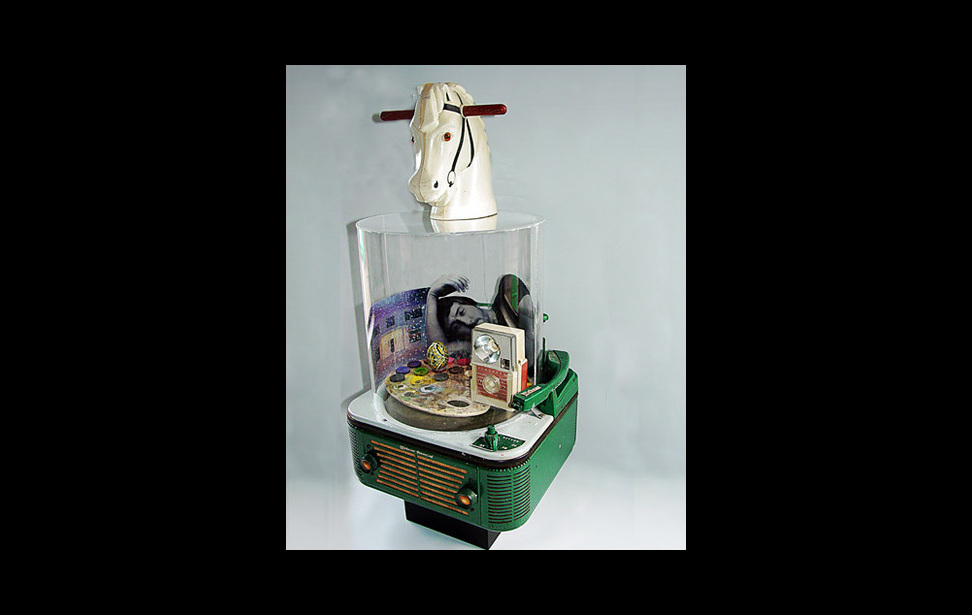 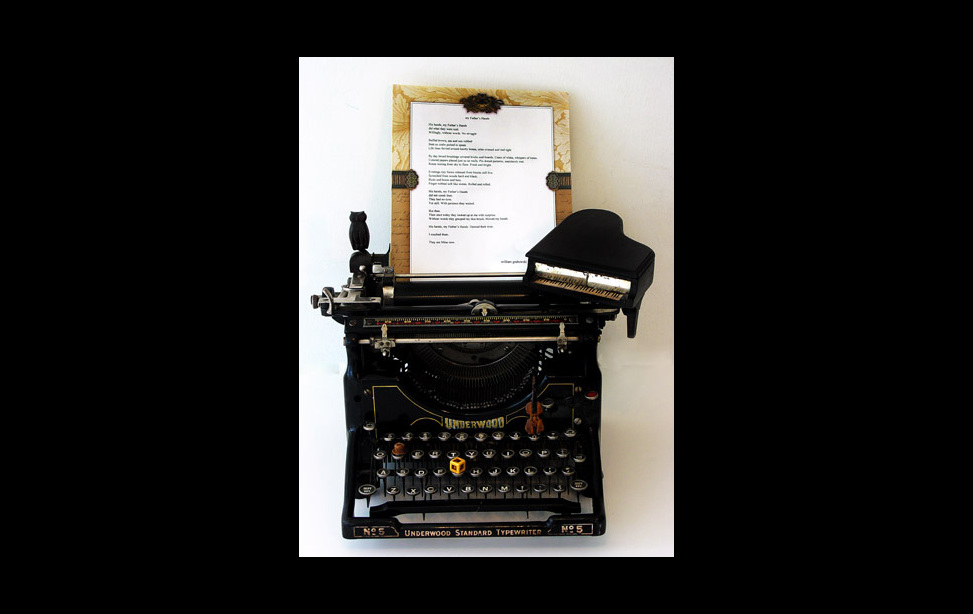 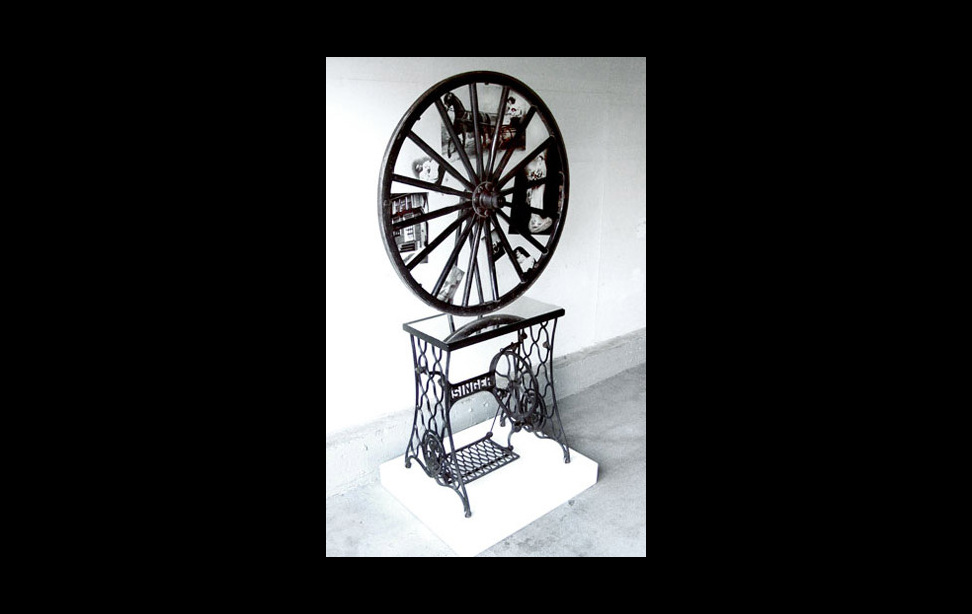 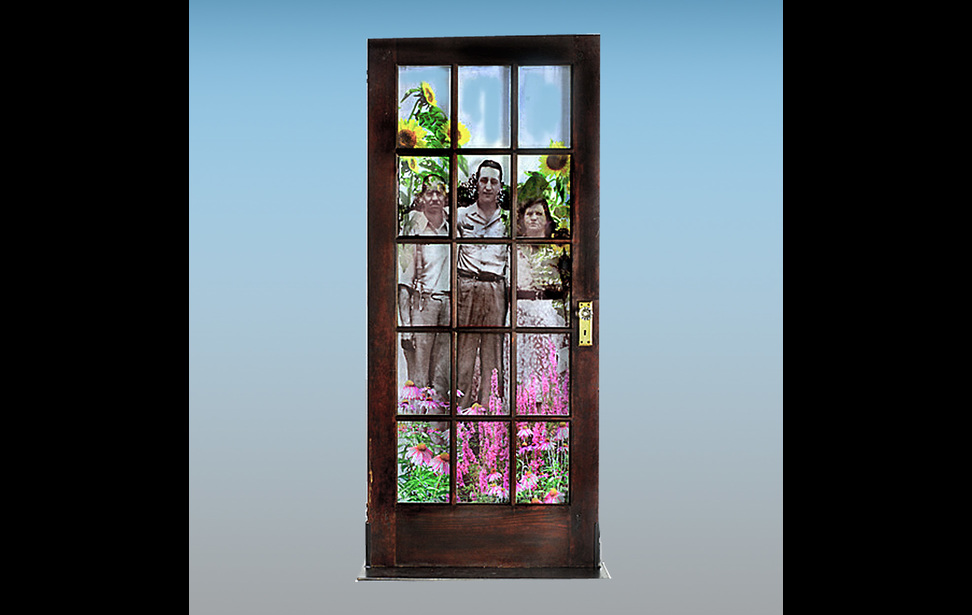 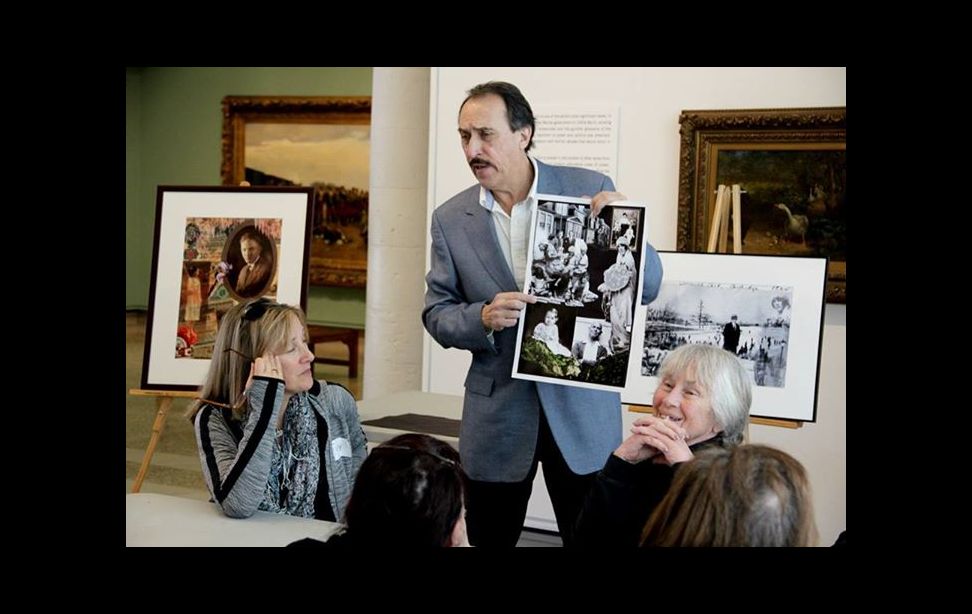 Nostalgia, once seen as a malady of the soul, turned chic towards the end of last century, and contemporary art has been excavating lost pasts ever since. Long Island artist and teacher William Grabowski got with the vogue by chance.

Back in 2000 his mother died, leaving him with a houseful of possessions to fathom. Sifting through her basement, he turned up boxes of old family photographs. "Many of them were dog-eared and yellowed and fraying," Grabowski told thalo.com. But he was duly intrigued. To perk up these heirloom images, Grabowski taught himself how to edit graphics using Photoshop. So began a marathon of scanning and restoring the vintage trove, and working it into montages. Some of the snapshots exuded mystery. "I didn't know all of the individuals in the photos, and I didn't have parents to convey the info, but I could still put them together," said Grabowski, whose father died in 1992.

More ephemera fetched up where the photos came from. "Rather than throw everything away, I decided to take some of the pieces of bric-a-brac and memorabilia that I thought were interesting and combine them with the photos," said the 60-year-old maker. Prime finds included his mom's wartime suitcase, his dad's violin and his own childhood building blocks.

Out of the rummage a new series was born. Dubbed "Legacy," it spans 35 works of montage, collage and assemblage, or photos arranged together with 3-D pieces. The mixed-media collection has been winningly exhibited in numerous shows, including at the Center for Photographic Art in Huntington, and it can be browsed virtually at williamgrabowski.com. Grabowski was recently tapped to participate in an exhibit entitled "Facing History," to be held at the Suffolk County Historical Society from this September to January.

Grabowski père would no doubt be moved to see his boyhood violin brought back to life in an assemblage called Nora Remembers (as seen in photo 1). Jutting out from the upper-right bout is a profile of the titular minder, an elderly woman bathed in ethereal light, with a somewhat more ghostly replica perched underneath. There's something vaguely nautical about the way she keeps a lookout, like a figurehead on a mythical ship. Shot from another angle, her frailer likeness peers out of the lower-left bout. If above she's placating the gods of the sea, the mere mortal below yields to the winds of time. Anchoring the works is a box with her floaty portrait in acetate. Needless to say, this item has a backstory, and Grabowski recounted it. "I met a very old woman crossing the Irish Sea once, and she proceeded to tell me her life story..." Eventually Nora posed for some pictures. Her profile would later remind Grabowski of a certain musical instrument. Out came the father's broken violin and on went the ancient mariner's visage.

Among the most elegiac of Grabowski's totems is Portal Vision, the piece with his mother's luggage (as seen in photo 2). Stood on its side and opened like a locket, it provides a double frame for an interior scene lined with wallpaper and retro red silk. An oval portrait of a young boy stares out from another era. He and his dollhouse setting are at once oddly distancing and intimate." The person in the suitcase is an interesting individual," noted Grabowski. "My father had talked about an older brother who passed away in childhood, though I didn't know anything about him." Having established that a toddler in a family photograph was his father, Grabowski deduced that the older boy pictured was the deceased sibling. "So I wanted to bring Uncle George back," Grabowski declared. "As the suitcase sits there opened and he's being revealed and reinvented, his life is back with us."

Portal Vision has been shown widely, sweeping numerous awards. "I like to think more people have seen George since he's been in my artwork than when he lived a brief seven years," Grabowski mused. Though the artist's rawest material is memory, romance alone would bring him up short. Portal Vision exemplifies his layered, tech-savvy approach. It took scanning George's photo and creating a decal using a special acetate process. Transferred to glass and mounted inside the suitcase, the image plays off its setting to suggest a sculptural effect.

Crafting these tender homages has moved Grabowski to dig deeper into his geneaology. His research took him to Ellis Island, where he discovered that his grandfather sailed from the Old Country in 1909. "I am very much drawn to these people who came here from Poland over 100 years ago," he said. "I just wanted to touch base with them and create a link that would last forever."

Ellis Island - First Impressions Revisited is a mixed-media affair that conjures the immigrant and the imagined world in an evocative mashup (as seen in photo 3). Featuring the wooden building blocks Grabowski played with as a child, it's also completely in keeping with the artist's aim to document 100 years of his family's growth. "I decided that I was going to build with them once again, 55 years later," he commented. The assemblage captures a youngster's view of Ellis Island upon first landing.

Grabowski's quest has also turned him into a chronicler of Pop Americana. Take the Webcor Jubilee phonograph of Self-Portrait at 45 rpm and the Underwood typewriter that steadies My Father's Hands, for starters (as seen in photos 4 & 5). In one piece, Portrait of Anna, a Singer sewing machine base supports a wagon wheel (as seen in photo 6). He literally rescued the sartorial icon from history's trash bin. As ever, there's a tale to tell. "I found a photo of a woman and two young children in a horse-drawn cart, and I realized that the baby had to be my grandmother," Grabowski recalled. After affixing photos that saluted the survivor spirit of his Grandma Anna -- whose husband died before the stock market crash, when she was pregnant with her second child -- he saw that the spoked artifact would be difficult to hang. Fate intervened. As he was driving to school, someone was throwing out an old Singer sewing machine just like the one his seamstress grandmother had used throughout her life. He'd found his solution. "It was such an extraordinary connection," Grabowski marvelled. "There, houses from my very house was the perfect base for this piece that I needed to use and complete this Portrait of Anna. So I kind of smiled and looked up and said, 'Thanks, Grandma!' "

Like the ancestral altars worshipped in spiritual traditions across the world, Grabowski's conjurings are acts of thanks to the enlightened souls who have come before. "I think of these works as a celebration of their lives and a thank you and a preservation," he said. And perhaps that explains their universal appeal. "They're really visual prompts, and they're also there to prompt others to create their own type of narratives or stories," added Grabowski. His hope is to make spectators wonder, "Who are these people? What's the background? What's happening?"

Pressed about the narrative quality of his work, he dispelled any notion of a particular beginning-to-end effort. "They're not stories as such, because there is a variety of individuals and pieces of memorabilia that don't necessarily go together," he clarified. For Grabowski, the act of reincarnating comes with the creative manipulation of disparate elements, some of which hold intense personal meaning and others not.

Are there rules to how the reverent trickster creates? "Basically what happens is that I'll get a spark, and the spark will begin the idea for the piece, and then it's an evolution and a journey," he explained. "Then I'm just on board, and I don't know where it's taking me." By the same token, the unfolding process dictates what materials he will need. "I give myself no constraints," Grabowski said. This includes enlisting outside help, as was the case when he hired metalworkers to connect the base for Portrait of Anna and for a larger work, Welcome Home, that layers outsized images of his father and grandparents on a door which his mother had enigmatically saved from the Rego Park house (as seen in photo 7).

It was there that Grabowski’s artistic flair was nurtured, from age 8. Home sick one day, he figured he'd amuse himself by drawing. The resulting sketch of a bird won his parents' kudos. A teacher echoed their excitement. Soon enough, the budding artist began taking his talent seriously, including as an undergraduate student at Stony Brook University. He went on to earn a Master’s Degree in Education at Hofstra University and another Master’s in Instructional Technology at LIU Post. His degrees have come in handy. To support his art habit, Grabowski has racked up 35 years of teaching art at an elementary school in Nassau County's Herricks School District.

For extracurricular kicks, he serves on the education committee of the nearby Heckscher Museum of Art, where he has had work exhibited in a juried show. More recently, in a Museum program entitled Making Memories, he instructed adults with early-Alzheimer's to mount their own family-themed collages (as seen in photo 8).  And then there are his private clients. Grabowski has been commissioned to produce works marking the lives of other families' loved ones. Six years ago, one such piece went to the actor Brian Dennehy, whose brother Ed shared the live stage with Grabowski back in the artist's thespian days (as seen in photo 9).  His repertoire ran from musical theater to straight drama, including a stint singing and dancing his way through Brush Up Your Shakespeare at the Hofstra Playhouse and starring in Rashomon. Life got in the way of his theater career. "When I got married and had kids, I didn't think I should be leaving every evening," he laughed. Now that his daughters are 20 and 17, Grabowski performs as a background actor for the Long Island-based television series Royal Pains. Asked how his brood felt about his body of work -- which has been exhibited some 250 times and which has won nearly 150 awards -- he replied with a mixture of pride and gallows humor, "They know that the work that I've done will live with them when I'm gone."

That's some cache. It even includes props that Grabowski fashioned for Jacques d'Amboise's National Dance Institute, fetching up in venues from the Brooklyn Academy of Music to Madison Square Garden. Several props are displayed in the "Theater Design" gallery of Grabowski's website, alongside galleries such as "Embedded Portraits," featuring street art shots, and "Videos," a carousel of one-minute videos that were selected to be screened at Brooklyn College. "Embedded Portraits" is perhaps the most dramatic counterpoint to Grabowski's Legacy artwork. Despite the sweat he put into mastering online image manipulation (as seen in photos 10 & 11), this body of street photography advances what he calls, "incongruous scenes of life grabbed instantaneously when they look like they were Photoshopped, but they weren't."

While following his broad-ranging passions, ultimately the multi-tasker has his lens pointed towards the future. "I'm very dedicated to finding permanent collections for my work to reside," said Grabowski. He recently received some good news. The New-York Historical Society confirmed that he's next in line to score a permanent home for 100 of his prints on their website. This series will soon dwell at the online domain of New York's oldest cultural institution. Grabowski can now celebrate his newest reinvention: a legacy for the generations before him and for those to come.

Photo 4: Photo of "Self-Portrait at 45 rpm" courtesy of William Grabowski.

Photo 5: Photo of "My Father's Hands" courtesy of William Grabowski.

Photo 6: Photo of "Portrait of Anna" courtesy of William Grabowski.